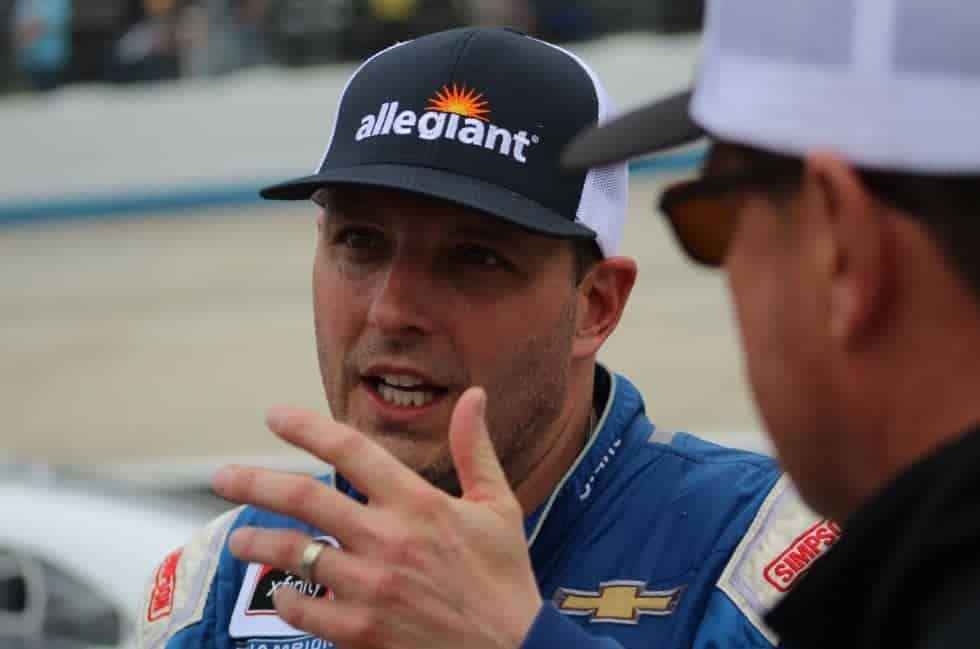 After three weeks off, the Camping World Truck Series drivers return to the track this weekend at Las Vegas Motor Speedway to kick off a triple-header with the NASCAR XFINITY Series and the Monster Energy NASCAR Cup Series.

On Friday (Sept. 14), 38 teams will fight for 32 spots to make the race and eight playoff drivers will set their focus on the championship.

Justin Haley won the series’ last race at Canadian Tire Motorsports Park when Kyle Busch Motorsports teammates Noah Gragson and Todd Gilliland got together and spun coming out of the final turn. Meanwhile, Johnny Sauter, who sits atop the point standings, holds a healthy 35-point advantage over the cut line, though he is followed closely by Brett Moffitt, who sits six markers back.

Gragson sits third, 24 points above the cut line, while Mosport winner Haley is fourth. Matt Crafton and Stewart Friesen find themselves locked in a tie for the final two spots in the Round of 6 heading into this weekend.

Ben Rhodes and Grant Enfinger, who were the only two playoff drivers to finish outside the top 10 in the last race in 14th and 17th, respectively, currently sit below the cut line. Rhodes is just one marker outside the top six, while Enfinger is 12 points behind.

Much of Friday night’s race broadcast will likely be spent following those eight drivers, but there will be 24 others out there hoping to steal the spotlight from the championship contenders. From veterans to rookies and those in between, there are plenty of drivers you can keep an eye on while the race broadcast handles the playoff drivers.

For the second race in a row, Timothy Peters has been tabbed to pilot the No. 25 Chevrolet for GMS Racing. He replaces Dalton Sargeant, who abruptly parted ways with the team right before the playoffs began. A victim of the abrupt closure of Red Horse Racing last season, Peters was sidelined for much of 2017. However, this weekend will be his third 2018 start.

Peters piloted the No. 92 RBR Enterprises Ford to an impressive seventh-place finish at Martinsville Speedway and ended up fourth when the dust settled behind the wheel of the GMS Racing No. 25 at Canadian Tire Motorsports Park. In both cases, the 2012 championship runner-up flew largely under the radar while the focus was spent on series regulars.

Las Vegas has been rather kind to Peters throughout his career as he’s only finished outside the top 10 three times in 10 starts, and one of those was an 11th-place run last season for Young’s Motorsports. Prior to that race, he scored six straight top 10s, including a victory and four top fives. And as a bonus for Peters, GMS has shown quite a bit of strength in the mile-and-a-half races this season.

So ready! Thank you guys for another go at it with the 25 guys! #goodtimes https://t.co/e0cTbL7jJN

Austin Theriault will make his first Truck Series start since 2016 on Friday night. Joining brand new team On Point Motorsports, the 24-year-old will pilot the No. 30 Toyota that made its series debut at Bristol Motor Speedway with Scott Lagasse Jr. behind the wheel.

“This opportunity to work with everyone at On Point Motorsports, to help them build this new truck program from the ground up is both exciting and challenging,” said Theriault. “We have what we need to be successful, and I know all of us are committed to giving it our best effort.

“I have history at Las Vegas, and though the outcome was not the best moment of my career, my added experiences at 1.5-mile tracks since then will come in handy as we look to tackle the track.”

What Theriault is referring to is the vicious crash he suffered when he and, then-teammate at the now-defunct Brad Keselowski Racing, Tyler Reddick got together. The result was Theriault leaving the facility on a backboard with a compression fracture in his lower back. The impact with a wall that was not protected by a SAFER barrier also broke his HANS device. After the incident, LVMS moved forward with its plan that was already in place to add a SAFER barrier to that portion of the wall.

(Author’s note: The video of this accident can be readily found on YouTube. However, I have chosen not to include it because it caused a driver injury.)

In 11 career starts, Theriault has two top fives and four top 10s, including a best finish of fourth in the season opener at Daytona International Speedway in 2015.

Part-time driver Jesse Little will bring his JJL Motorsports No. 97 Ford to Las Vegas for his first start at the mile-and-a-half track. The team will have chassis 003, which was run at Atlanta Motor Speedway earlier this season. In that race, Little ended up eighth after running inside the top five as the laps wound down. In six starts this season, the 21-year-old boasts four top 10s, including a best finish of sixth at Iowa Speedway.

“I’m really excited to compete at Las Vegas,” Little said. “I’ve never been there, but I feel really good about the truck we are bringing, and we’ve worked hard to make our mile-and-a-half program better since the beginning of the year.

“Hopefully, we can have a competitive finish on Friday night and carry that towards the end of the year.”

The start will mark the first of four expected races for Little over the final six events. In addition to Las Vegas, JJL Motorsports plans to compete at Martinsville Speedway, Texas Motor Speedway and the season finale at Homestead-Miami Speedway.

He came within a single turn of his first career victory at Canadian Tire Motorsports Park the last time the series raced, but Todd Gilliland ended up a disappointing 11th after he and teammate Gragson tangled in the final corner. A visibly upset driver of the No. 4 Toyota was “extremely mad” at his teammate and wanted to “go fight him right now,” so you can bet Gilliland is ready to get back on track and put that race behind him.

He didn’t make the playoffs in his rookie season, thanks, in large part, to missing multiple races before his 18th birthday in May, but he does have KBM equipment to back him up. Though he’s never made a Truck Series start in Las Vegas, Gilliland has top-10 finishes in all but one of his mile-and-a-half starts this season. The only outlier is Chicagoland Speedway where he ended up 17th after a late-race flat tire.

“I feel like our team can be good at any type of race track, and I think the Vegas race is kind of similar to Michigan [International Speedway] (qualified second, finished fifth),” Gilliland said. “That’s what people have told me. Hopefully, we can be just as fast as we were there.”