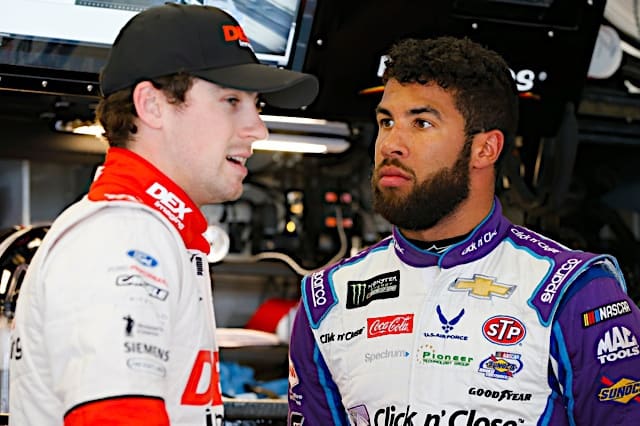 My generation pretty much invented the term “Netflix and chill.” If you don’t know what that is by now, ask Siri.

Everybody is streaming. Not just millennials. Say it with me: E-V-E-R-Y-B-O-D-Y.

Movies, television shows, documentaries, sports, it’s all on demand, available to the customer based on their needs, wants and desires.

Did anybody ask for Game of Thrones to become a thing? Doubt it. What about Orange Is the New Black? Friends? Seinfeld? Keeping Up with the Kardashians? The list goes on and on.

Nobody explicitly asked for these things, but they sure as hell enjoy being able to watch them whenever they want to. And who wouldn’t? In today’s age of now-now-now, more-more-more and content-content-content, we consume anything and everything.

So … why on earth isn’t there a NASCAR show?

Yes, that’s hella vague, I know. But hear me out.

NASCAR has been pushing the youth movement for a while now, and the results on track haven’t reflected that. Chase Elliott, Ryan Blaney and Erik Jones have one win apiece, with Alex Bowman, Bubba Wallace and Daniel Suarez failing to reach Victory Lane so far in their Monster Energy NASCAR Cup Series careers. That’s not to mention drivers like Matt DiBenedetto, Noah Gragson, Todd Gilliland, Ryan Preece, Hailie Deegan, Christopher Bell and more.

They’re going to win a ton of races and championships in their careers. Just like… THESE GUYS!

AND BOOM GOES THE DYNAMITE.

I mean, come on. How freaking cool would it be to have something, anything, I’M BEGGING YOU, like what we had with the Gillette Young Guns campaign from the 2000s? Junior. Jimmie. Happy. Matt the Brat. Rocketman. The Outlaw. All before they were, well, all those names I just mentioned.

I dare you, DARE YOU, to watch this 29-second commercial and not smile.

NEWMAN! I love it so, so much.

Could you imagine Bubba, Blaney, Bowman, Chase, Suarez, William Byron and That Jones Boy in a spinoff? It doesn’t even have to be a marketing campaign. It could be as simple as the young drivers messing around.

Oh, wait, isn’t that what they do already? You see it on social media. You see glimpses of it in interviews on television and radio. Why not put a camera in front of it and make some magic?

By the way, the newly announced show Racing Wives isn’t a bad idea. In fact, I’m going to watch it and probably enjoy it, as many other NASCAR fans will.

But there’s a huge opportunity to do something with these young drivers. To beat a dead horse, the known drivers are either out or on the way out. Dale Earnhardt Jr., Tony Stewart, Jeff Gordon, Kasey Kahne: buh-bye. Kevin Harvick, Jimmie Johnson, Jamie McMurray, Ryan Newman and others aren’t too far behind.

Like it or not, the younger drivers are going to be here for awhile. So get used to seeing and hearing a lot from them.

Along with the Young Guns campaign, there was a largely forgotten series called Fast Cars and Superstars: The Gillette Young Guns Celebrity Race. It consisted of sports celebrities such as John Cena, Bill Cowher, John Elway, Kenny Maybe, William Shatner, Tony Hawk, Serena Williams and others and only lasted for one season. The idea of the show was to team other athletes/celebrities up with a young gun who would help guide them around Charlotte Motor Speedway in a stock car. Fastest time wins.

Doesn’t sound like  a terrible idea to me. But since it’s been done before, I say nay to redoing that. Why not simply follow some of these drivers around each week, at the track, away from the track, through the trials and tribulations of an almost-40-week-long season, getting to know them on a personal level?

Again, come on, tell me you wouldn’t watch that.

Leading up to the 2018 Daytona 500, Wallace starred in a Facebook Watch series called Behind the Wall with Bubba Wallace. I watched it. I was immersed in it.

Full disclosure: I actually didn’t even have access to Netflix until I stole my friend’s brother’s password (sorry, Chad). So I wouldn’t consider myself a huge binger by any means. But I binged the hell out of that series with Wallace. And I cried, by myself, on my couch, watching the end. You can take that to the bank and cash the check.

That’s just one example of how something can touch a viewer and humanize the athlete. Most of the guys I’ve talked about are already humanized to a certain extent.

But with Elliott’s following and the seeming unwillingness to let his emotions out fully sometimes, could you imagine how people would respond to something where viewers were able to see the real Elliott? With his buddies in Dawsonville or with his crew members at the track?

Or Blaney and Wallace smashing the drum set and playing Call of Duty (it was in the Facebook Watch series, don’t @ me)? What about Willy B, who’s about as ham and cheese on white bread as you can get, roasting the hell out of his Hendrick Motorsports teammate Bowman?

NASCAR has an opportunity. FOX has one, too. NBC, same to you. The two networks have a plethora of talent that’s well known in the sports world, and they can easily get involved with the process, somewhat like the original Celebrity Race series.

Put Terry Bradshaw and Howie Long in a room with Wallace and Jones and see what happens. Pair Michele Tafoya and Doc Emerick with Suarez and Bowman. I don’t care what you do, but don’t do nothing.

There’s an untapped market out there, and NASCAR is obviously wanting to promote its young budding superstars even more than it already has. So what are we waiting for? Let’s get some smart people in a room (you can invite me too if you want; I’ll clear my schedule), find a sponsor for it and make some magic happen.