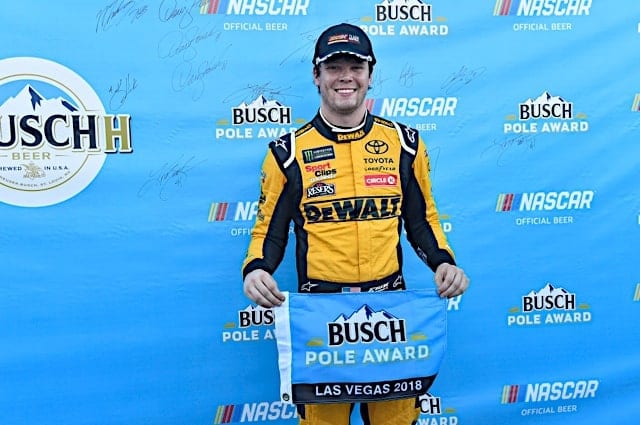 There goes That Jones Boy.

Erik Jones won the pole for Sunday’s South Point 400 after turning a blazing lap of 188.121 mph (28.705 seconds) around Las Vegas Motor Speedway. The Byron, Mich. native became the youngest driver to win a pole at LVMS, the second of his career (Bristol, 2017) and first of this season.

“Definitely can’t start any better than that,” Jones told NBCSN following his pole run. “We’ve got a long ways to go this weekend, but we’ve definitely got the speed to do it.”

Kyle Larson and Jamie McMurray also made the final round of qualifying and will roll off 11th and 12th, respectively.

Saturday will see the Monster Energy NASCAR Cup Series cars partake in two practice sessions. The first will run from 1-1:50 p.m. ET and final practice will run from 3:30-4:20 p.m. ET.

The green flag for the South Point 400 is scheduled to fly just past 3 p.m. ET on Sunday afternoon. Harvick won at LVMS earlier this season by dominating and winning all three stages, but had his playoff points taken away due to a penalty.