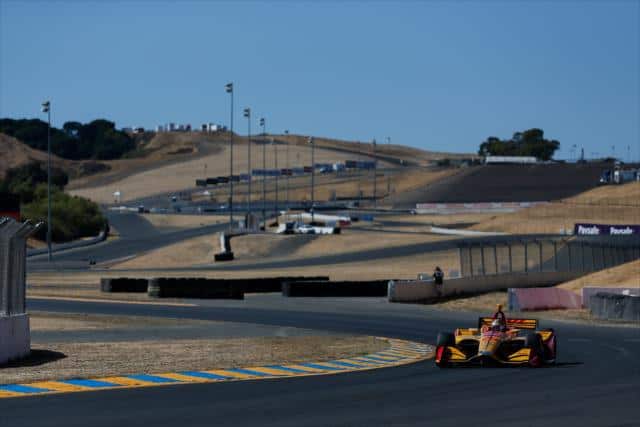 Will Power, part of the Team Penske championship standings tie, put his No. 12 in third on the speed charts followed by Simon Pagenaud and Marco Andretti.

Alexander Rossi finished the practice session in eighth while the fourth and final championship contender Josef Newgarden failed to turn a lap during the session due to fuel pressure issues. The driver of the No. 1 is also fighting a case of food poisoning.

Newgarden rebounded from fuel pressure issues in the first session to top the second session of the day. Newgarden turned a  110.338 mph (1:17.815) lap to put his No. 1 Verizon Chevrolet on the top of the speed charts. Dixon was right behind the No. 1 with a lap that was 0.0836-seconds off of the top.

The 2018 Indy Lights Champion Patricio O’Ward, who is making his IndyCar Series debut this weekend, finished the session in third. Power and James Hinchcliffe rounded out the top five in speeds.

Rossi gained a little speed from what he missed in the first session, finishing sixth. Rossi was the worst of the championship contenders during the session.

Qualifying for the IndyCar Grand Prix of Sonoma will kick off at 6 p.m. ET Saturday while the race itself is slated to go green at 6:30 p.m. ET Sunday (September 14th).

Long day… feeling a little under the weather and we missed practice 1 with an fueling issue. @team_penske is the absolute best… sorted out the issue and we took P1 in Practice 2.

I’m ready to get some rest and come back tomorrow to make a run at the @verizon P1 award. pic.twitter.com/3y2jUAiK1x

Double the points, but just one opportunity.