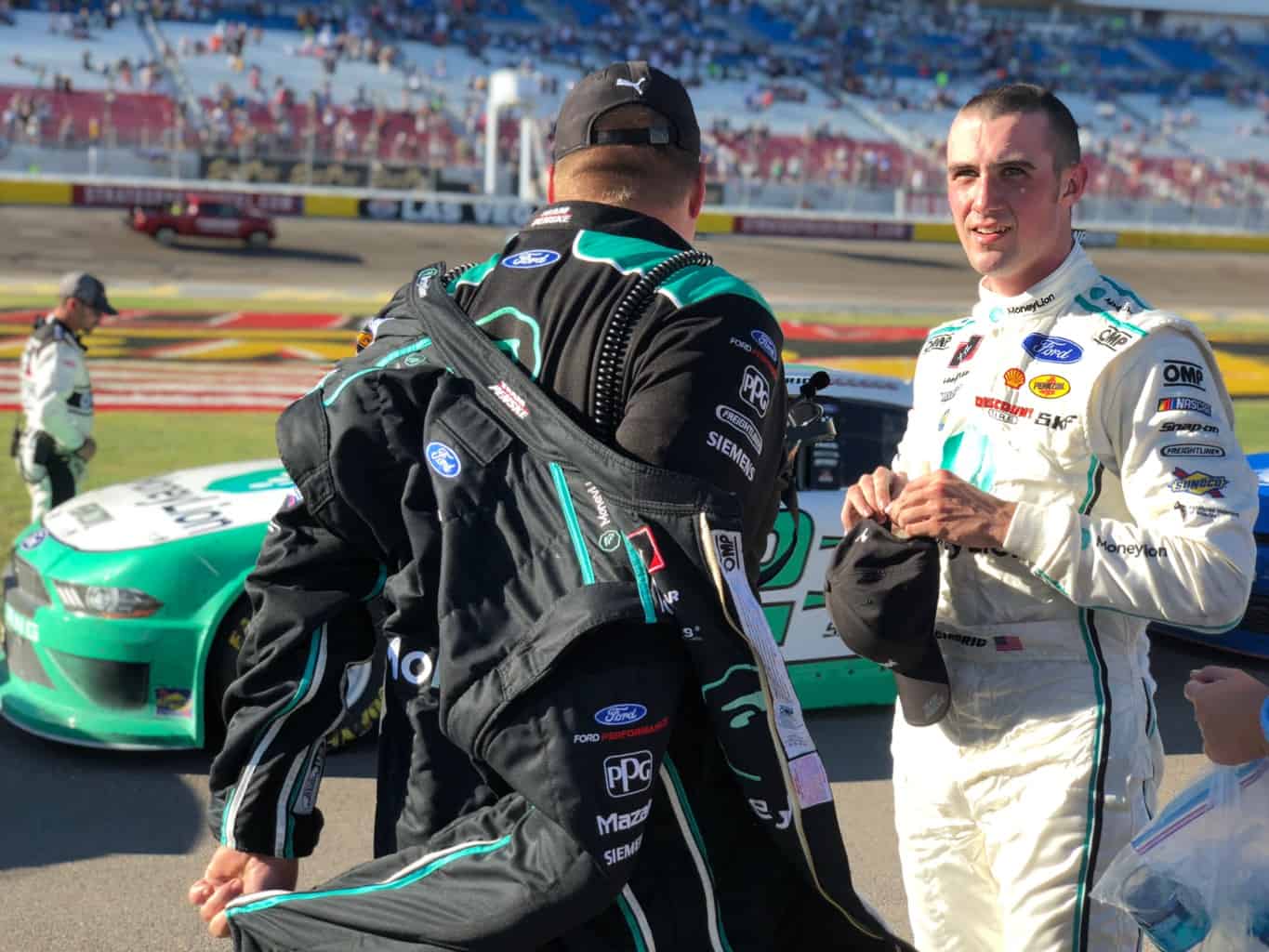 Austin Cindric earned his eighth top 10 finish of the 2018 season thanks to his ninth-place run in the DC Solar 300 at Las Vegas Motor Speedway on Saturday September 15. (Davey Segal/Frontstretch)

The look on Austin Cindric‘s face after the DC Solar 300 was one of relief.

And why wouldn’t it have been? The Mooresville, NC native has had a rash of poor results in the past month, finishing 37th at Road America (engine), 40th at Darlington (crash) and 34th at Indianapolis (crash).

He was just happy to bring the car home in one piece again.

“Feels really good man,” Cindric said with a chuckle following his ninth-place result. “It’s probably been the toughest month, month and half of my career just from a standpoint of things out of your control and not being able to help yourself. Even getting two poles in that same timespan and being able to run well, just not being able to put it all together. But that’s racing. A good learning experience.”

Big sigh of relief for @AustinCindric today. First non-DNF in about a month.

Told me it’s been the toughest month of his young racing career, but he has “nowhere to go but up” now. pic.twitter.com/TFlFcavWKo

Cindric has one playoff point to his credit this season, putting him at a disadvantage to the 10 drivers ahead of him who have accumulated substantially more throughout the season.

“Things reset, and unfortunately I’m not in a great position playoff points wise,” Cindric said of the ensuing playoffs. “The king of the hill aspect of racing in the playoffs is going to come up again. I’m no stranger to that. I had to do the same thing last year in the Truck Series. I’ll be fighting for everything, I don’t expect to give anything, that’s for sure.”

*exhales*
An exhausting 3-4 weeks, capped off with a solid Top-10, a playoff spot, and a great debut of the @moneylionracing #22. Thank you @Team_Penske @roushfenway for getting me this far. Time to dig #NASCARPlayoffs

Cindric had three top fives coming into the 300-mile event and earned his eighth top 10 of the season. Gathering a little momentum heading into the Xfinity Series playoffs, he’s still short on

“It’s mixed, and I say that with reservation, but I haven’t had continuity all year,” Cindric said of his split time between the No. 22 Team Penske Ford and the No. 60 Roush Fenway Racing Ford. “To be able to jump back and forth and be able to test yourself in a bunch of new scenarios, sometimes it’s really good and sometimes it does suck the life out of you. It’ll be really nice having some continuity racing with the same team every weekend being able to get things pointed in the right direction.”

But there’s no time like the present, and Cindric believes that he can contend for wins week in and week out with a little more seat time. These playoffs will be the best experience possible.

“I think I’ve been driving to the best of my abilities and I think that comes every weekend,” Cindric said. “I keep getting better and better. My experience level is still low relative to the guys I’m racing against so I definitely take that with a grain of salt. I’m excited, I don’t get nervous. I got nowhere to go but up.”