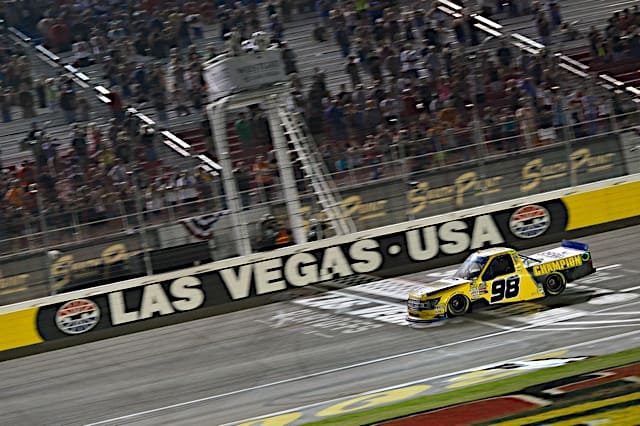 The third time was the charm for Grant Enfinger.

The Fairhope, Ala. native won Friday night’s World of Westgate 200 at Las Vegas Motor Speedway, earning his first win of the 2018 Camping World Truck Series season and the second of his career (Talladega, 2016). With the win, Enfinger locks himself and the No. 98 ThorSport Racing team into the Round of 6 of the Truck Series Playoffs.

Stage one was dominated by pole-sitter Noah Gragson, as he led all 30 laps. John Hunter Nemechek and Stewart Friesen couldn’t get close enough to the Las Vegas, Nevada native’s bumper and had to settle for second and third, respectively. There was one caution for Tanner Thorson, who slammed the wall and his truck subsequently caught fire.

The second stage saw Friesen lead the field to the restart, but Enfinger quickly made work of the No. 52 and didn’t look back, earning the stage victory. Riley Herbst slammed the wall and Bo Lemastus brought out a caution. Both of their evenings ended prematurely.

Midway through the final stage, crew chief Jeff Hensley brought Enfinger down pit road and opted to change no tires, giving him the lead. But due to his older rubber, Enfinger lost the lead but caught a break as another caution flew with 34 laps to go after Friesen and Nemecheck spun.

The No. 98 came down pit road under that caution for the final time, put on their set of sticker tires and drove from 19th inside the top five within 10 laps.

After a red flag for a multi-car crash, Enfinger found himself restarting in second-place on the bottom. And when race-leader Brett Moffitt ran out of fuel as the green flag flew, Enfinger pounced.

He was able to hold off Johnny Sauter on the final lap to score the victory and lock himself into the next round of the playoffs.

“Just an unbelievable day,” Enfinger said. “We’ve put together individual performances that could have won a race throughout the year. We probably had a handful of woulda coulda shoulda’s, and this was the first time we put the whole package together. We won the race which was important, but we had the best truck here. That’s a testament to ThorSport Racing and Ford Performance. We’ve been searching for this as far as speed. I was a little more aggressive but it was the same me. We just had a heck of a truck.”

Moffitt finished 11th, but wasn’t the only playoff driver to encounter trouble at the 1.5-mile facility.

Friesen spun out three times in the final stage and was relegated to a 17th-place finish, leaving him in eighth place, eight points behind the cutoff to advance. Gragson made slight contact with Rhodes and experienced two flat tires (and one commitment line violation) forcing him to an 18th-place result. However, he holds an 18-point lead over the cutoff spot due to his accumulation of playoff points throughout the season.

Gragson’s teammate, Todd Gilliland, finished 27th after contact with Jesse Little sent him into the wall.

Here's a look at what happened between Gilliland and Little going into the corner. pic.twitter.com/R17mdi0t4a

The NASCAR Camping World Truck Series will take one month off before returning to Talladega Superspeedway for the cutoff race ahead of the Round of 6.