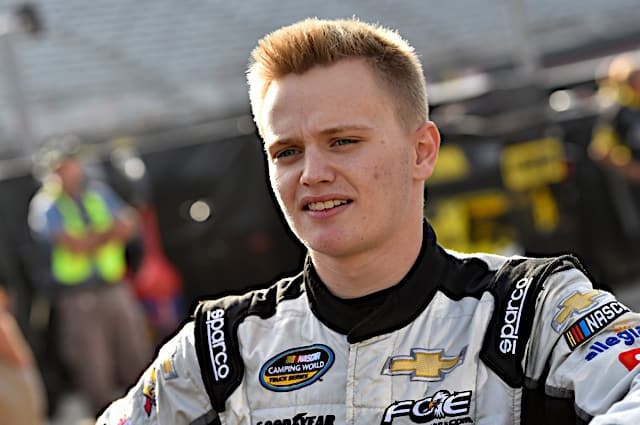 But then the playoffs began.

The Winamac, Ind. native put himself in the right place at the right time at Canadian Tire Motorsports Park and wound up in Victory Lane for the second time this season, clinching his spot in the Round of 6. And on Friday evening in the World of Westgate 200 from Las Vegas Motor Speedway, Haley scored a third-place result, his seventh top five and 14th top 10 of the season.

An impressive first two races in the #NASCARPlayoffs for @Justin_Haley_, who has a win and a third heading into what will be a stress free @TalladegaSuperS in one month. pic.twitter.com/LHek3tsvUR

“We didn’t start off the best,” Haley said of his evening. “Yesterday in practice we had a pretty good race truck. But we didn’t qualify too well and we were kind of running with Johnny (Sauter) there, and it obviously came to us. (Crew chief) Kevin Bellicourt and everybody made great adjustments. But it was a good night.”

Haley’s average finish of second in the first two races is the best of all eight Camping World Truck Series playoff drivers, and he’s thankful he can head into the cutoff race without any nerves.

“It’s been a good round one for us,” Haley said. “It’s been stress-free even though the past couple weeks we haven’t raced. It’s been good vibes. I went on vacation last week and now we have a month until Talladega. I’d say we have the two best runs out of anybody in the playoffs right now. That’s really good, especially because I feel like we’re the underdog going in.

“It’s been a good playoffs for us so far, we just have to keep the momentum.”