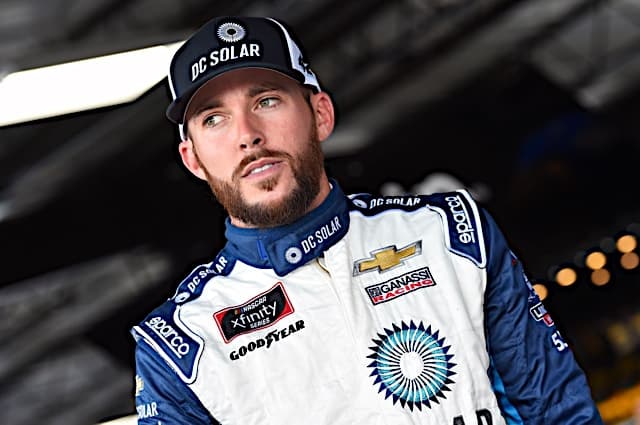 The slipper still fits, and this NASCAR Cinderella story is alive and well.

Ross Chastain reached the high point of his NASCAR career by winning Saturday’s DC Solar 300 at Las Vegas Motor Speedway in the No. 42 DC Solar Chevrolet for Chip Ganassi Racing. The win was the Alva, Fla. native’s first victory in 132 Xfinity Series starts and first in his NASCAR national series career.

“This is bigger than playoffs, this is bigger than one year,” said Chastain, who swept all three stages en route to the victory. “I don’t want to sound like I’m spinning a story, because I’m not. It’s a kid from Florida, eighth generation farmer that started hobby racing when I was 13 … if it all ended and I went back today it’s obviously all worth it.”

The finish marked Chastain’s seventh top 10 of the season, and was the culmination of the Florida Watermelon farmer’s hard work throughout his four-year full-time Xfinity career.

He led all but 20 laps, and will drive the No. 42 car next weekend at Richmond Raceway before hopping back into his No. 4 JD Motorsports Chevrolet, the car he drives on a regular basis.

“This is what everybody works for,” Chastain said. “It all backs up to four years ago when Johnny Davis called me to ask if I wanted to drive his No. 4 car … all that coming to a point today, this is way bigger than a playoff push or another race in Richmond. To be fast and to get in a car that goes fast and does the job, that’s what’s fulfilling for me.”

Chastain, who has a previous best-finish of fourth at Iowa earlier this season, will enter the playoffs with 10 playoff points, nine of which have been accrued the past two races due to his stage wins and race victory. For finishing 10th in the standings, he gets one playoff point.

Justin Allgaier, who clinched the regular season points championship at the conclusion of stage two, finished second for his 15th top five and 21st top 10 finish of the season. The result was also his eighth top 10 finish in nine races at LVMS. Polesitter Cole Custer, Christopher Bell and Elliott Sadler rounded out the top five.

Other playoff contenders Tyler Reddick and Daniel Hemric finished in 28th and 29th, respectively, after being involved in crashes during the final stage.

CAUTION! A multi-car incident unfolds through the tri-oval. #DCSolar300 pic.twitter.com/aX6dtdUqqg

Ryan Reed and Matt Tifft also came home in 35th and 36th, respectively, after crashing in Turn 4 on Lap 64.

Chase Briscoe also was involved in a huge crash on the backstretch on Lap 181, ending a top 10 day for the No. 60 Rosh Fenway Racing team.

The NASCAR Xfinity Series playoffs will begin next weekend at Richmond Raceway for the GoBowling 250 on September 21.