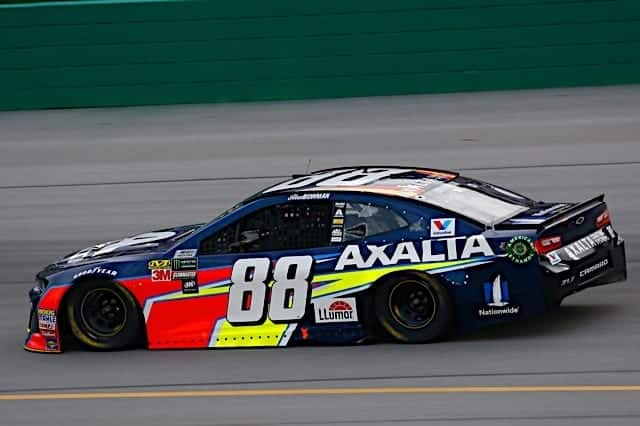 Alex Bowman entered the NASCAR Playoffs as a darkhorse, largely viewed as unable to compete for race wins and the championship. But after his performance at Las Vegas Motor Speedway in the South Point 400, Bowman may be closer to finding Victory Lane than expected.

However, Sunday’s (Sept. 16) great run went sour due to getting involved in one of multiple late-race incidents. After finishing third in stage one and ninth in stage two, Bowman was relegated to a 19th-place result.

“We ran better than I expected to coming here,” he said afterward. “I think that gives me some optimism going forward. Just super frustrated.”

He had reason to be. After finishing 23rd at Darlington and 33rd at Indianapolis, Bowman was looking for a good run to kick off his first ever postseason in the Monster Energy NASCAR Cup Series. Unfortunately for the Tucson, Ari. native, he got caught in the wrong place at the wrong time.

“Looked like they got jumbled up in front of us,” Bowman said of late-race contact which sent his evening spiraling down the drain. “I got jumbled up, the No. 31 (Ryan Newman) kind of slid up in front of us. I was loose off and cars kind of backed up into us at the same time. Hard racing happened to us at the end, but we should’ve been pretty far in front, not in that position to begin with.”

Despite the disappointing result, the No. 88 Hendrick Motorsports had raw speed, some of the best they’ve had all season. Bowman and company could be peaking at the right time.

“That’s the most speed we’ve had on a mile and a half all year,” Bowman said. “I was running 50 percent, maybe 60 percent that first run toward the end, and just mowing guys down. Our long run speed was so good. We were too tight to restart but our long-run speed was really good. So that’s encouraging. Unfortunately, we don’t have another mile and a half for awhile but hopefully we can turn it around in Richmond, too.”

Bowman started 11th and finished 18th earlier this season at the 3/4-mile Virginia oval. He’ll look to improve upon that result next Saturday evening.

Bowman currently sits in the 12th and final transfer spot on the playoff grid, six points ahead of Jimmie Johnson.