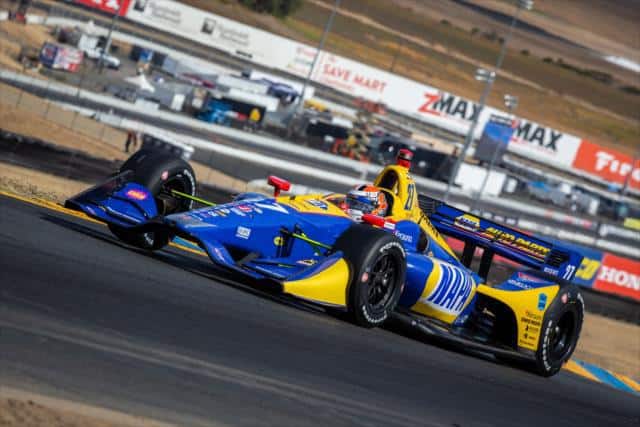 Whether it came in practice, qualifying or the race on Sunday (Sept. 16), Rossi appeared to be a step behind when it counted most. Scott Dixon had a weekend that was deserving of a fifth championship. That was just what he did following a clean, quiet second-place finish in Sunday’s GoPro Grand Prix at Sonoma Raceway.

But despite not earning the title, Rossi still put on an impressive comeback. After a string of incidents, he slid inside the top 10 for the 14th time this season.

Entering Sunday’s race, Rossi was the only other driver who could win the title unless major misfortune hit Dixon. And while the champion’s day included little-to-no drama, things went south in a hurry for Rossi. Right after the drop of the green flag, the Auburn, Ca. native found himself behind the eight ball.

Rossi made contact with his teammate Marco Andretti, injuring the wing and right front tire. The No. 27 was forced to go down access roads all the way to pit road which forced the team to save fuel early to stay on the same sequence as the leaders. Rossi would continue playing catchup as Dixon would continue to play it safe up front.

A mid-race caution featuring Graham Rahal would put Rossi back in position to attempt a comeback. Restarting 20th, Rossi tore through the field as his bid for a title hung in the balance. Normal maneuvers by Rossi would be seen as insane by the normal eye but they put him up to fifth with a little glimpse of hope for the championship.

But the maneuvers Rossi made were just too little, too late. He’d fall to seventh with old Firestone Reds and would finish 57 points behind Dixon for the championship.

“Hats off to the whole No. 27 NAPA Team,” said Rossi. “It was a great day for Andretti Autosport with Ryan [Hunter-Reay] winning so it’s very unfortunate what happened in Turn 1 on lap 1. It’s a situation I’m sure we’ll all replay a lot of times but at the end of the day, it’s been a good 2018 and I am very appreciative for all the support we’ve had this year.

“We came pretty close and we’ll work on the things we need to be better on and come back stronger next year. [Scott] Dixon’s the benchmark. He’s the five-time champion for a reason so he deserves it 100 percent. We’ll work very hard to come back and try to beat him next year.”

In his third full-time season, Rossi was able to put on a show for the fans tallying three victories, eight podiums and three poles. If Rossi can continue this upward projection, 2018 will not be the last year he contends for a title.

And if Rossi has his way, it’ll be the last one he loses.