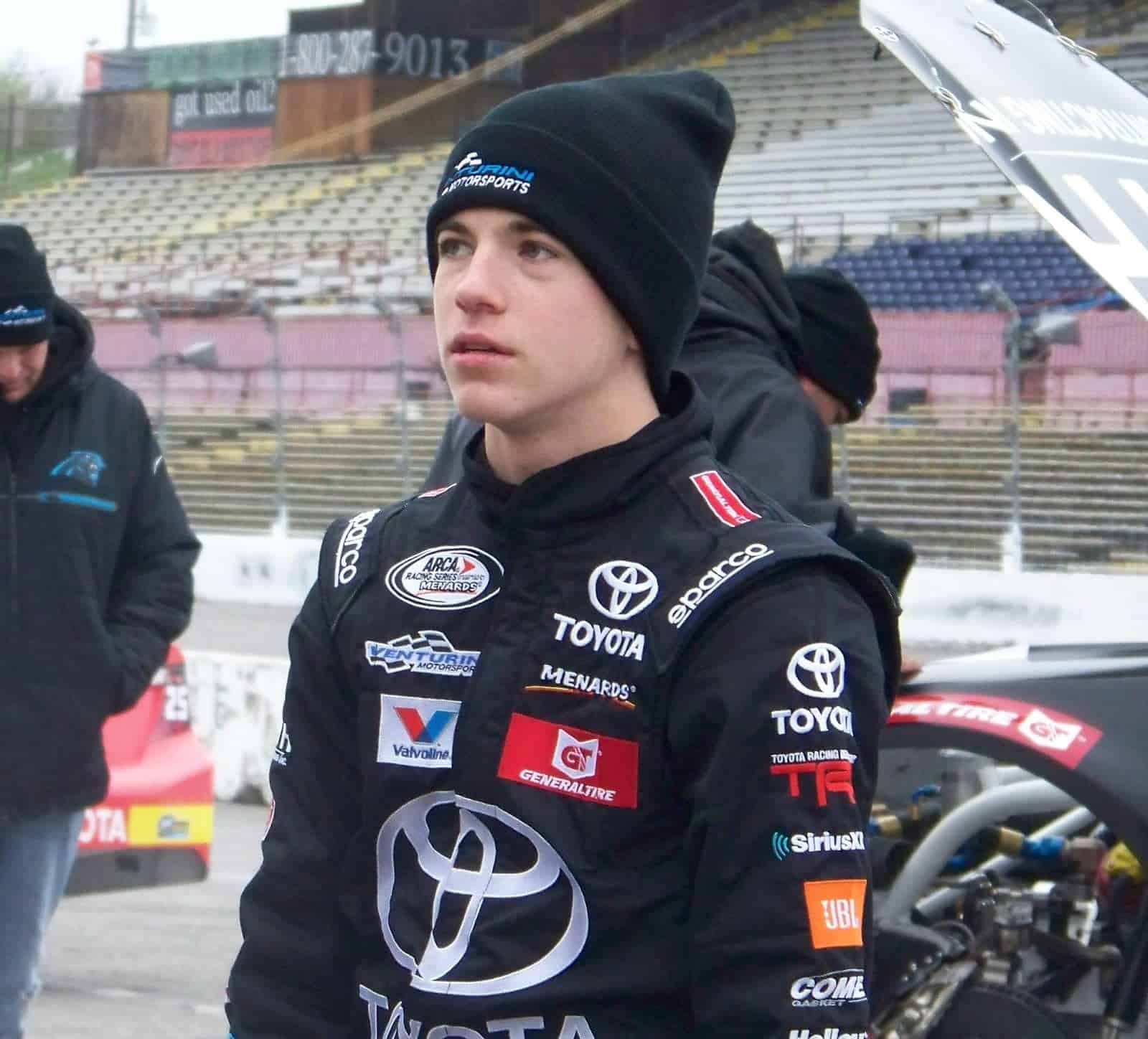 After dominating the spring race only to cut a tire battling for the lead on the final lap, Chandler Smith laid waste to the field in his return to Salem Speedway, taking the lead from polesitter Zane Smith on Lap 1 and leading 199 of 200 circuits to take the Fall Classic, his second career ARCA Racing Series win. Gus Dean, Chase Purdy, points leader Sheldon Creed and Travis Braden rounded out the top five.

While Chandler Smith was on his own private island driving away from the field Saturday night, the incident everyone will be talking about occurred between Zane Smith and Michael Self late in the going. Self, who was uncharacteristically roughshod in his performance Saturday night, had earlier spun Zane Smith’s No. 41 on Turn 2 exit on a late restart, puncturing Smith’s radiator to finish 18th in a must-win race to maintain championship hopes.

When the No. 41 returned to the track, it wasn’t long before MavTV cameras showed Self’s No. 55 car destroyed in Turn 4, a result of Zane Smith “ending his night.”

The two drivers exchanged heated words under the supervision of several sheriff’s deputies in the infield that had a lot of backstory, but the end results were undeniable: On-track incident(s), retaliation, two destroyed racecars.

Creed finished fourth, but his No. 28 team won the fan vote for best throwback paint scheme, as they carried a Hardee’s scheme inspired by Cale Yarborough’s ride in the 1980s. Four other teams in the 23-car field sported throwback paint schemes on Saturday night, which has become an annual “throwback weekend” for ARCA at Salem.

Chandler Smith described his car as “on a rail” Saturday night, and any other cliche for a dominant racecar would apply to the No. 20’s performance. From the drop of the green, which saw Smith take the lead on the high side of Turn 4 on Lap 1 with a powerful move, there wasn’t a car in the field that could touch the 16-year-old, as Smith navigated the late race restarts with literal ease.

Despite running approximately half the races in 2018, Smith has now led more laps in ARCA competition than any other driver. Smith will be returning to Venturini Motorsports in 2018 to run the short tracks and Pocono races in 2019 (he’s not old enough to run the superspeedways and reportedly is not leaning towards running the dirt races at this time). That age restriction has his competition in the ARCA field breathing a big sigh of relief.

Gus Dean rebounded from a woeful performance on the dirt at DuQuoin to score a runner-up finish on Saturday night, his fifth top five of 2018 and a result that equaled his career-best finish at Salem. Dean, whose No. 32 team was one of only two teams not associated with MDM Motorsports to run a throwback paint scheme, kept his nose clean in what became a beat-and-bang race for even cars in the top five, and the results showed.

Travis Braden avoided the on-track incidents that plagued the team at Salem in the spring to finish fifth, the second consecutive top-five finish on a short track for the No. 27 team amid their continuing improvement on-track. The momentum couldn’t come at a better time… the next ARCA event is at Lucas Oil Raceway, the site of Braden’s only career win back in 2015.

It may not have been the result the No. 69 team was hoping for after finishing second at DuQuoin and moving up through the field early, but Will Kimmel’s 10th-place finish was still the best finish the No. 69 team has posted on a paved track in 2018, and the first time that Kimmel has scored consecutive top-10 finishes since the DuQuoin-Salem stretch of the schedule one year ago.

The No. 18 team minimized calamity to finish ninth, but it could have been so much more for Riley Herbst on Saturday night. The No. 18 team proved to have a car that could contend on the long run and Herbst got up as far as third in the running order, but contact racing with Chase Purdy around the mid-race point appeared to cut a rear tire on the No. 18, forcing him to pit road under green around lap 94. Story of the season for the No. 18.

Joe Graf Jr. has made plenty of enemies in the ARCA garage after winning at Berlin by doing his best impression of a bulldozer, but he didn’t need those enemies to find trouble on Saturday night. On a restart around lap 192, Graf got going too hot and pounded the wall in Turn 4, coming to a stop a half-lap later and dooming the No. 77 to a finish outside the top 10.

Kaden Honeycutt’s ARCA debut was cut short by an oil pump failure of some kind according to an in-race interview with crew chief Jeff McClure, and that was while running second. Honeycutt, the latest 15-year-old to debut in ARCA short track competition, began smoking around lap 111 but managed to maintain a top-five spot until a caution, when ARCA officials had the No. 43 car brought down pit road to investigate the smoke.

While I’d dispute Honeycutt’s assertion in his exit interview that they had the race won if it went green (no one was catching Chandler Smith on this night), the confidence is admirable. It’ll be good to see what this kid can do with a car that runs the full distance.

Spring race winner Christian Eckes finished seventh but was a literal non-factor at the front of the field all night Saturday. It was mentioned at several points during the broadcast that the No. 15 team was going out of their way to conserve tires over the long runs on Saturday night, but on a night that saw numerous contenders including Eckes’ teammate Chandler Smith and points leader Creed, it almost seems the No. 15 team overthought this race and took themselves out of contention doing it.

Passing was difficult for much of the evening, and let’s not forget that Eckes took the lead from a dominant Chandler Smith in the spring through heavy pressure on restarts. That heavy pressure was not on display Saturday night.

The lack of video replays from Saturday night’s broadcast making taking too hard a stance on the incident of the night difficult, but no matter what side one falls on, the incidents between Zane Smith and Michael Self were the low point of Saturday’s race.

We’ll start with Self, who after being a regular competitor in the early part of the ARCA schedule hadn’t run a race since Chicago in June, looked like a daisy-green rookie instead of the composed driver that scored wins at Chicago and Daytona. Self made contact with seemingly every car he passed or tried to pass during the early parts of Saturday’s race, including more than a half-dozen bumps with Sheldon Creed.

None of these early bumps could be considered dirty or even dangerous, but they obviously bent up the sheet metal on the No. 55, and Creed was extremely unhappy on the radio about it. Self would then cause extreme angst on a mid-race restart when he spun the No. 41 car on Turn 2 exit, sending Zane Smith nose-first into the inside wall and collapsing the team’s radiator, forcing them behind the wall for extensive repairs.

At this point, due to previous contact, the Nos. 41 and 55 had already been summoned to the ARCA hauler post-race.

It wasn’t 10 minutes after Zane Smith’s crew returned the No. 41 to the track that the caution came out, and TV cameras showed Self’s No. 55 in a heap in Turn 4. Zane Smith openly admitted to wrecking Self when interviewed after his car had returned to the infield, citing retaliation and a need to pump his team up as a rationale for his actions.

Self was restrained by track officials and police when he first attempted to confront Smith, and their later discussion was heavily monitored. Self, when interviewed, had composed himself and cited the cost of destroyed race cars as his primary concern stemming from the incident.

Was Zane Smith justified? If you’re going eye-for-an-eye, yes, he was. Self spun him and took him out of the race, and he returned the favor. It was not an unprovoked response. Having said that, Self is also correct in lamenting the costs associated with tearing up equipment the way these two drivers did. ARCA has been hurting for entries all season long, and while MDM Motorsports and Venturini Motorsports are arguably the two richest teams in the garage, settling disputes on-track is not sustainable for the ARCA Series, or 90 percent of its competitors.

If there’s a finger to point here, it’s squarely at ARCA officials for not getting ahead of this one. Zane Smith and the No. 41 team had every right to get back on the race track, as they still are not mathematically eliminated from the title chase. However, it’s entirely on the officials to put the fear of God into Zane Smith before he returns to the track to prevent the type of destructive retaliation we saw Saturday night. The commentary booth and everyone watching Saturday’s race knew before Zane Smith’s interview that the No. 41 had wrecked the No. 55. This was a preventable incident that was allowed to happen.

And besides, anyone that watches ARCA knows full well that “he crashed me so I crashed him back” doesn’t work. Remember Ricky Stenhouse Jr. and Scott Speed doing this same dance at Toledo in 2008? Spoiler alert; it ended with somebody else winning the crown.

Salem is on my list of local short tracks to visit. Now if I only had the winning lottery ticket…