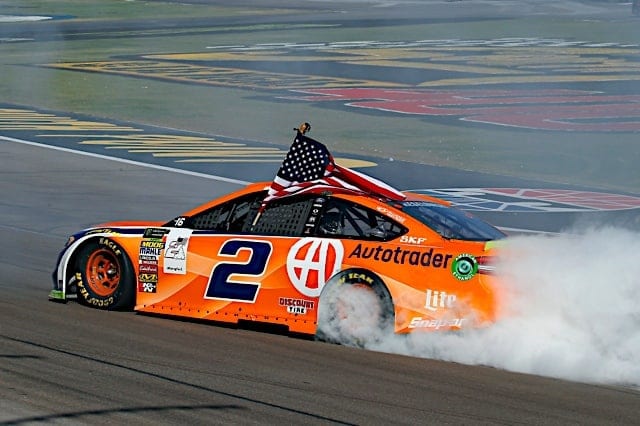 Las Vegas Motor Speedway was the wild card race in the NASCAR playoffs. Just like everybody predicted, right?

The inaugural South Point 400 from Las Vegas wound up being a race of attrition, as the majority of the Monster Energy NASCAR Cup Series postseason field faced a plethora of issues throughout the 400-mile, 272-lap event.

But Brad Keselowski steered clear of the trouble and wheeled his No. 2 Team Penske Ford to Victory Lane for the third time this season and the third consecutive week.

The win was also the 500th for Team Penske across all disciplines of motorsports.

“To start off the playoffs with a win is really strong,” Keselowski, who also won stage two, said. “I know it’s three in a row and all that great stuff, but it’s really a testament to this team … we weren’t as fast as the No. 78 car (Martin Truex Jr.), but we nailed the pit stops and the restarts”

It felt like Keselowski was the only playoff car to not run into issues on Sunday, as the other 15 encountered some form of a problem throughout the event.

Kevin Harvick (39th) blew a tire entering Turn 1 with about 10 laps to go in stage two, collecting Erik Jones (40th), who had nowhere to go. Chase Elliott (36th) slammed the wall in Turn 3, collecting Jamie McMurray (35th) around the midway point of the final stage. Kyle Busch spun through the infield grass and ran outside the top 10 for most of the second stage, but rebounded for a top-10 finish. His Joe Gibbs Racing teammate Denny Hamlin (32nd) had a similar spin, but wasn’t as fortunate, as the front end caved into a dip in the grass, ending his day. Kurt Busch was also involved in a late-race crash, as was Jimmie Johnson.

Ryan Blaney and Aric Almirola made slight contact. That caused to Truex scrape the wall while Johnson, Alex Bowman and Clint Bowyer all received damage with around five laps to go. Austin Dillon, who wound up 11th started at the rear of the field and Larson was trapped a lap down early in the race. Truex and Logano also scraped the wall early.

Talk about surviving the battle….

Hamlin (-20), Jones (-19), Elliott (-9) and Johnson (-6) are the four drivers on the outside looking in leaving Las Vegas, with Bowman, Bowyer and Dillon being the three drivers above the cutoff.

The Monster Energy NASCAR Cup Series heads to Richmond Raceway next weekend for the second race in the Round of 16.

Move over, Harry Gant, make room for Mr. September #2…. and he earned it today.

Truex did NOT win both “stages”, so I stopped reading.

No where in the article did it mention who won the second stage, only the first.