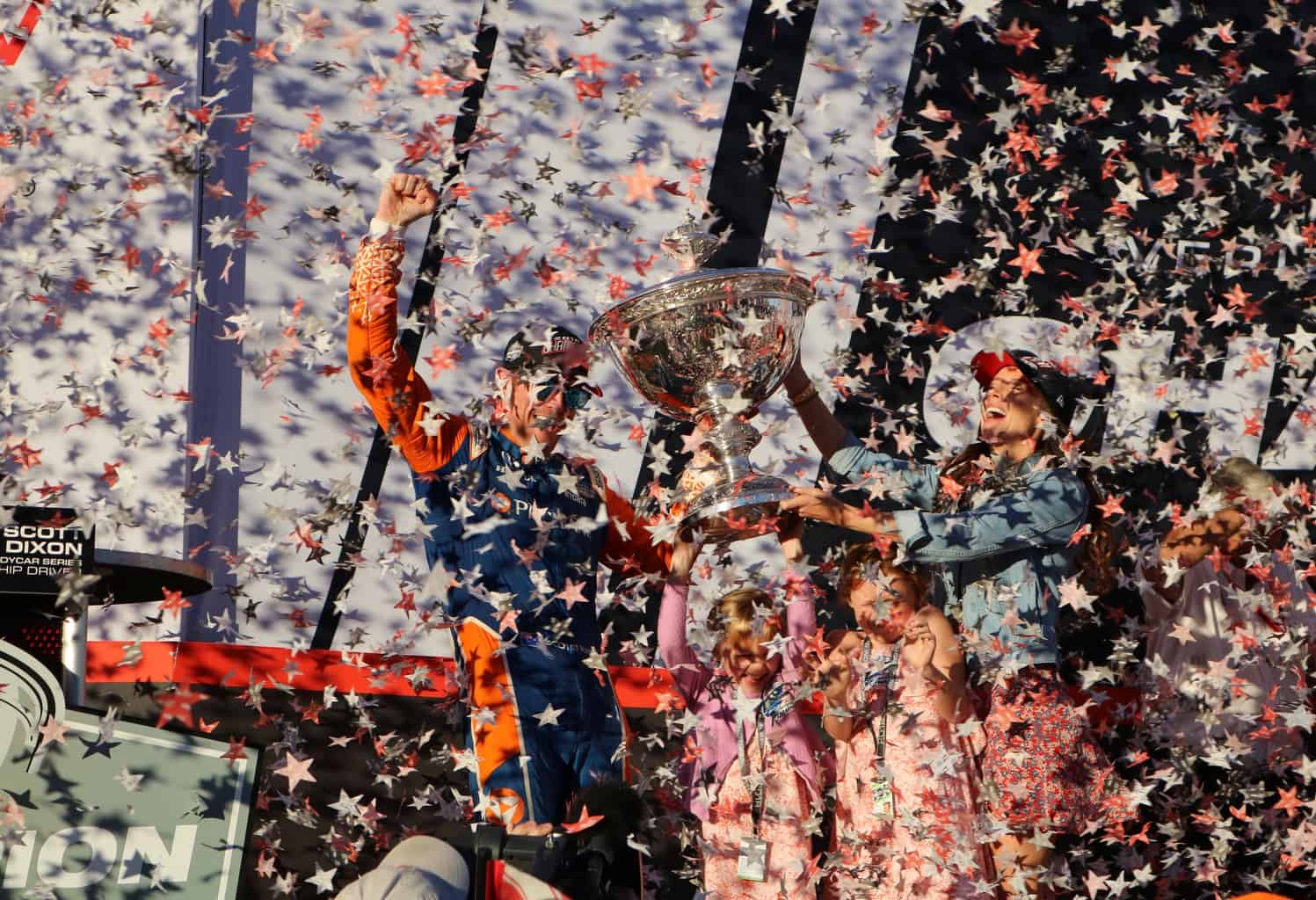 Andretti driver Ryan Hunter-Reay won the Grand Prix of Sonoma after starting from the pole and leading 80 laps. But Dixon finished a strong second, more than enough to clinch his fifth career Verizon IndyCar Series title.

Dixon’s greatest threat, Alexander Rossi, failed to put up an intense fight after he damaged his right-front wing at the start of the race. Rossi rear-ended teammate Marco Andretti and suffered a tire puncture. His pit stop to replace the tire and wing relegated him to 25th with nearly an entire race yet to run.

15 laps later, Jordan King pushed Rossi off the racing line as the two raced side-by-side onto the frontstretch. He lost ground again, but a mid-race surge after a caution period powered the third-year IndyCar driver to seventh when the checkered flag waved.

Rossi unofficially ended up 57 points behind Dixon in the standings.

The New Zealander has won everything there is to win in IndyCar. He’s an Indy 500 champion, a 43-time race winner, a 28-time pole sitter, and one of the best in the series’ history. Arguably, he’s the greatest of his generation.

At 38 years old, he’s also showing no sign of slowing down. When Target left CGR’s IndyCar program at the end of 2016, Dixon struggled to find a partner to replace it. He had support from NTT Data and Camping World in 2017, but those companies weren’t long-term solutions for the No. 9 car.

Before the 2018 campaign began, PNC Bank — a Pittsburgh-based company — joined the CGR team. Chip Ganassi is a Pittsburgh native and the coalition with the banking corporation appeared to be a great fit.

But how much longer will Dixon race? Well, probably as long as his body lets him. And if that’s the case, he’ll be around for quite a bit more time.

Dixon’s in tremendous physical shape and is as sharp as ever. Rossi is 26 years old and will undoubtedly have more opportunities to win races and championships, but he and the rest of the IndyCar field will have to deal with Dixon for a few more years.

Perhaps what makes Dixon a great champion rather than just a good one is his attitude. He’s an open-wheel superstar, but he never lets the fame and fortune get to his head.

Even after winning a fifth championship, he said, “I can’t believe this actually happened.

“You always doubt these situations so much that it’s never going to happen and I can’t thank everyone enough for this,” he told NBCSN. “It’s so cool.”

“Cool” is the perfect word to describe Dixon’s personality. It’s not often he gets emotional from his triumphs or hell-bent about the mishaps. There’s a reason he’s called the ‘Iceman’ — and it showed with his post-race television interview.

So what’s next for IndyCar?

The series won’t be competing at St. Petersburg for another six months, but as always, driver Silly Season will run its course. For the last few weeks, everyone has wondered what McLaren F1 driver Fernando Alonso will do in 2019. He tested an IndyCar at Barber Motorsports Park last week. Michael Andretti has said he hopes Alonso will be one of his drivers next year, but nothing is set in stone.

The series won’t return to ISM (Phoenix) Raceway or Sonoma next year, but it will visit Circuit of The Americas in Texas and WeatherTech Raceway Laguna Seca. The 2019 schedule will be 17 rounds again, including the 103rd Indy 500.

American open-wheel racing has enjoyed a renaissance the last few years. Ratings are ticking upward and markets such as Portland, Ore., Austin, Tex. and Birmingham, Ala. have been introduced to expand the outreach of the fan base. From a marketing standpoint, the only major downside to the upcoming offseason will be figuring out what company will replace Verizon as series sponsor.

NBC will also be the exclusive home of televised IndyCar events going forward. For the first time, the Indy 500 won’t be broadcasted on ABC, but only the diehard traditionalist IndyCar fan would make a fuss over it. The series is drawing interest from audiences around the world, especially since Alonso’s 2017 Indy 500 run. There will never be another AJ Foyt or Mario Andretti. But the star power that youngsters like Rossi, Josef Newgarden and Indy Lights phenom Patricio O’Ward bring may put the sport back into the spotlight it once had.