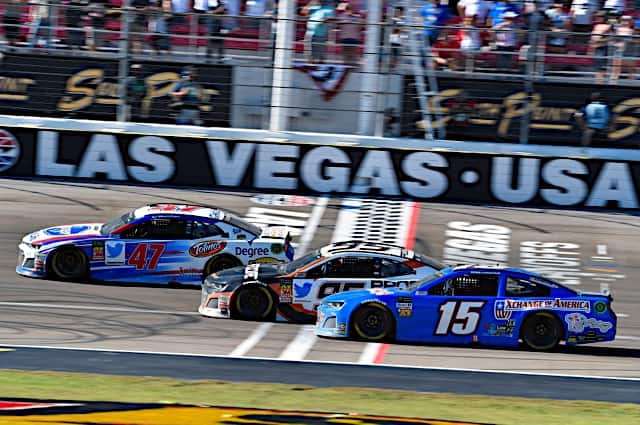 Every year once the NASCAR playoffs kick off, it’s tougher than usual to see what’s going on with the small teams of the Monster Energy NASCAR Cup Series. Most of the attention, updates and TV time is directed to the 16 title contenders, and rightfully so.

But while the eyeballs of NBCSN and most of NASCAR nation focused upward, the progress of the underdogs seeped through the cracks as 408 miles of racing came to a close.

How? Sunday’s (Sept. 16) South Point 400 from Las Vegas Motor Speedway saw three-quarters of the postseason field experience issues. These varied from pops with the wall to pit road problems, spins through the grass and head-on impacts.

Perhaps it was the added mass of playoff tension that caused the day to turn wild. Or maybe the high temperatures and slick race surface caught the teams and drivers off center. No matter the reason, it was a day to remember for plenty of teams struggling to stay on the radar.

Although some of the major incidents involved underdogs, the 12-caution day gave opportunity for some to rise up. Seven playoff drivers fell outside the top 20, giving others a chance to steal a little spotlight.

For the second straight week, Regan Smith finished in the top 20 during his fill-in role at Leavine Family Racing. After a 20th-place run last week at Indianapolis, “Super-Sub” Smith backed it up with a 12th this time at Las Vegas.

The result was his best in Cup since Pocono in 2016 and it was good enough to earn him Frontstretch “Underdog of the Race”. Didn’t take long, huh?

That finish wasn’t quite indicative of his speed, but the No. 95 Chevrolet had a good day on most accounts. They avoided trouble, gained spots from their starting position and topped the underdogs when playoff guys dropped out.

Additionally, Smith grabbed the lead for 10 laps under a green-flag pit cycle. The time out front was his longest since a 2011 victory at Darlington for Furniture Row Racing.

Behind Smith was AJ Allmendinger, who led a double top-15 day for JTG Daugherty Racing in the 14th spot. Teammate Chris Buescher was 15th, earning his second top 15 in the last three races.

For Allmendinger, Sunday tied his best non-plate finish since Martinsville in the spring.

This top 20 list is far from over, as Corey Lajoie earned his best result of 2018 in the 16th spot. After grabbing the free pass on lap 184, Lajoie and his No. 72 TriStar Motorsports Chevrolet was a surprising underdog to see pierce through the storm.

Another surprise was JJ Yeley, who gave the No. 23 its best finish of 2018. And if you love some stat-digging, check this one out: Yeley’s 17th on Sunday was his best non-plate finish since 2008 when he finished third at New Hampshire. Wow.

Rounding out the underdogs with over-the-top finishes, Landon Cassill also came out with his best finish of 2018 in the 18th spot. The result was not only his best this year but StarCom’s best in their roughly one-year history. It was also their first lead-lap result.

Finally, Ross Chastain ended his successful weekend in Vegas earning a 20th-place run with Premium Motorsports. Just two days earlier, he gave Premium their first-ever top 10 in the Camping World Truck Series and backed it up with a win for Chip Ganassi Racing in the NASCAR XFINITY Series.

The win did not go without recognition.

Today was incredible for all of Motorsport with @RossChastain win. It gives people hope that feel like their ability is no longer enough, that they will never get a shot. Things have changed in all Motorsports but today is proof that teams and sponsors need to take some risks.

That Top of the Class section was fun. And during a restart with two laps to go on Sunday, it looked like the list would be even longer.

With plenty of giants out of the question, one team looked to take advantage above the rest: Front Row Motorsports. As usual in 2018, this Ford organization has a way of staying together. Drivers Michael McDowell and David Ragan are side-by-side in points, 25th and 26th, and their average starts and finishes are roughly one position apart.

Sunday saw both cars restart in the top 15 before they came together in Turn 4. Here, Ragan lost the nose of his No. 38 and turned teammate McDowell to trigger a half-dozen-car accident.

And whether it’s Truck Series teammates in Canada, Formula 1 teammates in Singapore or Cup teammates in Vegas, wrecking your teammate is a world full of wrong for everyone involved.

I feel bad for putting my car in a tight spot and wrecking both @Team_FRM cars at the end. Sorry to @Mc_Driver and the #38 team. See everyone in Richmond.

Ragan continued to finish 27th while McDowell’s hard hit sent him to the care center, dropping him to 29th.

Kyle Weatherman was too far off to capitalize after this accident, losing the free pass to Alex Bowman and finishing 26th, three laps down. Despite out-qualifying teammate Cassill for the third time in four starts, the rookie couldn’t bring it home.

BJ McLeod was also in a hole too deep to climb out of, finishing 28th for Rick Ware Racing. Still, it was a career-best result in 20 starts for the NASCAR XFINITY Series team owner.

Reed Sorenson made his 12th start of the year and finished 31st for Premium. Timmy Hill was 33rd while Ty Dillon cut a tire to finish 34th for Germain Racing.

Darrell Wallace Jr. exited the race early with a brake issue in his No. 43 Richard Petty Motorsports Chevrolet to finish 38th.

It was a tripleheader weekend in Vegas, with both XFINITY and Trucks joining the track with Cup.

Starting with Friday’s World of Westgate 200 for Trucks, Ross Chastain came home seventh for Premium Motorsports. Behind him was Austin Theriault, who returned to the track that nearly ended his career in 2015, breaking his back in a head-on crash off Turn 4.

Three years later, the 2017 ARCA champion made his first series start in two years running for Steven Lane. He came home eighth in only the team’s second start.

Austin Wayne Self scored his first top 10 of the year for Niece Motorsports while Jennifer Jo Cobb finished 12th, earning her best result since finishing sixth at Daytona in 2011.

Turning to the XFINITY side, Ryan Truex grabbed his 10th top-10 finish of the year for Kaulig Racing while Spencer Gallagher earned a second straight top 10 in 2018, last running for GMS Racing at Mid-Ohio.

Just outside the top 10, JJ Yeley drove RSS Racing’s No. 38 to an 11th-place result. One position behind him was Ryan Sieg in 12th while Jeremy Clements, Landon Cassill and Joey Gase completed the top 15.

Haven’t slept since I got off the plane at 3am this morning. Watched the race back from this weekend so we could go over how to be better. Still didn’t seem real. Then the hauler pulled in & they sat this in the middle of the @CGRnascar shop!@DCSolar @carpoff_jeff @CGRTeams pic.twitter.com/nVUdivU6Ty

To all the people saying we need new people running RPM, go play tiddly winks. All 3 times we have had brake issues has been from 3 different issues. It's racing, shit happens. To point the blame at people is not the way to handle it.

My team and I are unfortunately going thru a rough patch. Again that's racing. Nobody is quiting nobody is giving up. We will lift each other up for these last 9 races to get it back on track!

Couldn't be more excited for RIR, just hope I have brakes???

This guy gets the most out of our cars every week. I should probably say car because he races the same car every race. https://t.co/X8i4MMp3Mj

Thanks man! Just keeping her warm for ya ?? https://t.co/WF9gSYvtbd