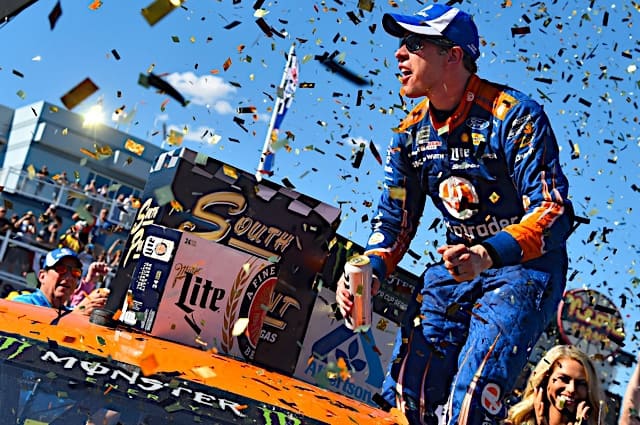 Momentum is a beautiful thing when you’re running for a championship, and Brad Keselowski is riding a huge wave of it after winning his third consecutive race and locking himself into the second round of the Monster Energy NASCAR Cup Series playoffs. Keselowski won the second stage and the race in a caution-filled event at Las Vegas Motor Speedway while Martin Truex Jr. took the stage one victory. It was a weird, wild event where more than half the 16 playoff drivers suffered through some sort of on-track problem. Tire issues, wrecks and pit road penalties meant only eight of them finished inside the top 18 spots.

Erik Jones won the pole but it was Joey Logano who grabbed the point for the first 33 laps. Kevin Harvick, Kyle Busch, Denny Hamlin and Regan Smith then led through green-flag pit stops; Smith, in particular, stretched his tank. Harvick took the lead after the cycle until Truex took the top spot through the end of the first stage.

Truex then held the lead through a pair of cautions for Ricky Stenhouse Jr. and Ty Dillon in stage two. Keselowski took the point after the Dillon caution but Truex regained the lead on lap 125 and led until the yellow flew for the first incident involving title contenders. This one involved Harvick, who blew a tire and collected Jones on lap 148. Keselowski retook the lead after that caution and led until the end of the second stage.

The final stage of the race began with Kyle Larson leading, having rebounded from a blown tire early in the race that put him a lap down 10 laps before the end of stage one. He held on with old tires for 11 laps before Keselowski wrested the top spot away from him with an on-track pass for the lead. Rookie William Byron then hit the wall on lap 183 to bring out the sixth yellow flag of the race. Keselowski led for 17 laps after the caution until Truex made another on-track pass for the lead. He took control until Jamie McMurray hit the wall, blew a tire and took out Chase Elliott in the subsequent spin.

That put Logano back up front, a spot he held until Kyle Busch spun out of Turn 4 to spur a series of late caution flags and multi-car incidents. Larson and Keselowski swapped the lead four times over those final 37 laps but, in the end, it was Keselowski who stretched out the advantage. A perfect final restart scored the 500th career triumph in all motorsports for Team Penske and a third straight MENCS win.

In all, there were nine different leaders who exchanged the top spot 23 times. The caution flag flew 12 times for 59 laps; that’s the most for a Las Vegas race since 2009. Truex led on three occasions for a race-high 96 laps while Keselowski reached the point eight different times during the event.

Everyone was in such a rush to crown Kyle Busch, Harvick and Truex as the ones to beat for the title in 2018. Well, somebody forgot to tell Team Penske and specifically Keselowski. Harvick and Busch won three consecutive races each early in the year, but Keselowski has matched it. Even better, he’s done it right at the beginning of the NASCAR playoffs. Don’t look now but the No. 2 is one of the strongest contenders for the title this season.

The other thing that became blatantly apparent Sunday (Sept. 16) is that people are pushing hard, probably too hard, for this title. 13 of the 16 championship contenders had some kind of incident during the race. In fact, four of them even suffered DNFs. Alex Bowman and Jimmie Johnson were well above the cutoff late in the event and both of them had incidents that resulted in each dropping back to just above and just below the cutoff line, respectively. The insanity that surrounded this race has to give everyone true trepidation over the Charlotte ROVAL still to come.

Tires were a point of discussion repeatedly this weekend, for more than one reason. There were several blown Goodyears that ended the day for quite a few drivers. They also were at a premium by the finish with most teams running out of their allotments before the end of the race. Harvick pulled no punches after his incident, calling them “piece of crap tires” and said you are “playing Russian Roulette” with them because they are so different set-to-set. The continued rocket science that tires have become in NASCAR racing has spiraled out of control and needs to stop.

Ross Chastain continues to live up to the hype. The underdog watermelon farmer from Florida has long been recognized as a talented driver deserving of a shot. He has been given it in the Chip Ganassi Racing No. 42 NASCAR XFINITY Series ride, and this weekend, he made the most of it. Chastain has won every stage and race that he has been on the lead lap in just two events. After winning on Saturday (Sept. 15), he’s heading to the playoffs, armed with a good bit of momentum. Hopefully, Chastain will get a chance from CGR to run the No. 42 or another top-tier car for the rest of the postseason.

ALBINO: CHASTAIN MAKES THE MOST OF HIS SHOT

Matt DiBenedetto announced that he will not be returning to Go FAS Racing next season and is available for any competitive rides next year. The problem for DiBenedetto is that he doesn’t bring a large amount of sponsorship money, which means, unless someone feels very generous, he’s not going to find an opportunity. Just last year, we saw Ryan Preece heed Dale Earnhardt Jr.‘s advice, prove what he could do in competitive equipment and looked poised to get into a good ride. Earnhardt then had a seat come open and what did he do? Instead of giving the ride to Preece, he took Tyler Reddick‘s sponsorship dollars. You can’t blame Earnhardt because it is the right business decision. Unfortunately, if someone like Earnhardt isn’t going to put a talented driver in a seat and find the money, it’s hard to find an owner who will.

Last week, Kasey Kahne announced that he was going to take a few races off to deal with dehydration issues that were making him feel uncomfortable piloting the race car. Most fans were sympathetic, although they would have liked to see him at the racetrack. Those feelings were compounded this weekend, as Kahne was seen in a tweet from the IndyCar race in Sonoma instead of being in Las Vegas for the Cup race. Kahne has already announced his intention to quit running Cup full-time next season but he’s not doing himself any favors by galavanting around while the team is still racing elsewhere.

NASCAR Silly Season continues to heat up as this weekend, as it was announced Ryan Newman is not going to return to the No. 31 car for Richard Childress Racing. From the look of things, the Nos. 95, 31, 41, 32, 1 and 78 will be empty next season. The No. 78 is shutting down operations, so that leaves five seats open. It’s unknown where, if at all, Newman will drive next year.

The rumors swirling currently with my sources place Cole Custer in the No. 41 next year. Daniel Suarez is likely going to the No. 95 while the opening of the No. 31 also gives Daniel Hemric a place to land should he move up. Most rumors have Kurt Busch winding up in the No. 1 while Truex will go to the No. 19, displacing Suarez. One other unconfirmed rumor that has surfaced is that Preece will be in the No. 47 next season. That leaves the status of Chris Buescher and AJ Allmendinger up in the air as both are under contract through next season. Perhaps they could split the No. 47 ride for 2019.

Sunday was an up-and-down day for Harvick, who ended up on a down note with a blown tire that ended his day early. In a post-race interview, Harvick was quick to throw Goodyear under the bus about how inconsistent its tires are. It will be interesting in the days ahead to see if anyone in Daytona has anything to say about that, or if Harvick will come out with a statement. Due to the lack of visible leadership for the sport right now, don’t expect to hear much of anything.

Jones was on the pole for Sunday but he was, unfortunately, sucked into Harvick’s incident and had his day cut short as well. Unlike Harvick, Jones does not have a large cushion of playoff points to lean on. That means the road to the second round just became much more difficult for the first-time playoff contender.

Buescher managed his eighth top 15 of the season and second in three races on Sunday. He capitalized on other peoples’ misfortune, kept his nose clean and came home with a 15th-place finish. Buescher has a dark cloud over his head about what his situation will be behind the wheel at JTG Daugherty Racing next season. Strong runs like this one can only help bolster his stock to maintain a full-time ride.

Corey LaJoie finished right behind Buescher for a 16th-place result. That is LaJoie’s second-best finish of his career and his best, by far, on a non-plate track. LaJoie continues to put in the effort to learn and become a better Cup racer, hoping to get a look from a better-funded organization with a seat in a more competitive ride. A 16th-place result might not sound like much to some but for this little team that could, it is a big one.

The playoffs are now officially upon us. 16 drivers are eligible to win the title but only 12 will advance beyond the first round. The postseason contenders are listed below with their associated points after Las Vegas. Race winners are bolded and will automatically advance to the next round.

The opener for the 2018 playoffs had almost everything you could possibly want from a postseason race. All but four of the championship contenders had issues during the event. There were 12 cautions, 23 lead changes and overtime which provided a thrilling green-white-checkered finish. When all was said and done, the only puzzle piece missing was a final-lap pass for the lead with paint trading and tire smoke. As a result, we’ll give this one five ice-cold Perfect Ten Pale Ales from Banger Brewing.

For the first time in the NASCAR playoffs, the series heads to Richmond Raceway. Race coverage begins at 7:30 p.m. Saturday, Sept. 22 on NBCSN. The race can also be viewed on the NBC Sports app. If you’d rather listen to the race, you can tune to your local MRN affiliate, www.motorracingnetwork.com or SiriusXM NASCAR Channel 90.