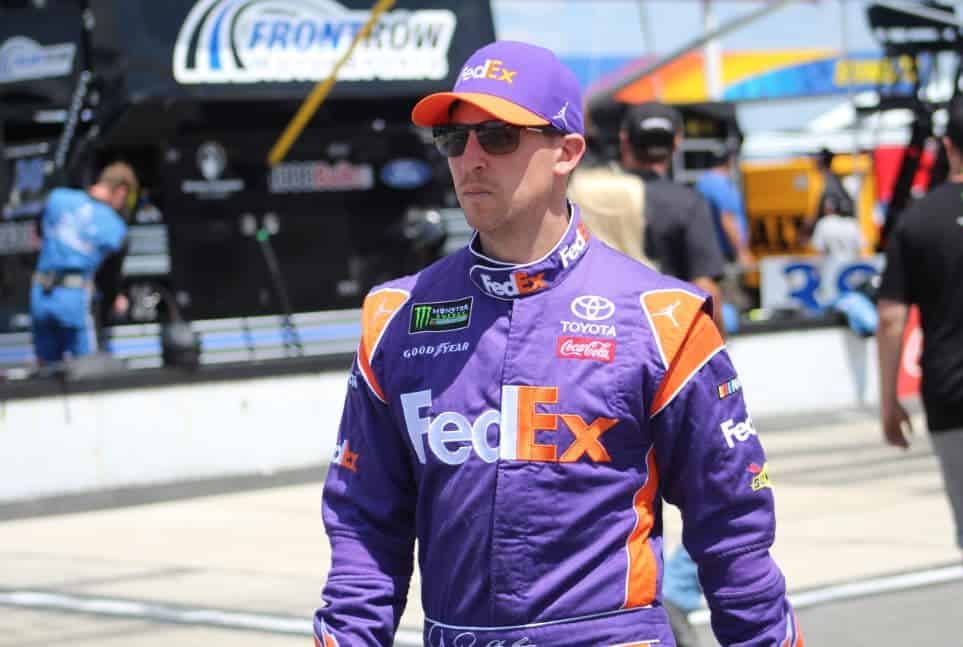 Denny Hamlin has rarely suffered from a lack of wins in his NASCAR career.  Since 2006, his rookie year in the Cup Series, he has never had a winless season.  Some of those years certainly were not big-win seasons, but Hamlin always found a way to get to Victory Lane at least once. Even in 2013, when Hamlin was dealing with injuries sustained in a nasty wreck at Auto Club Speedway, he surprised everyone by winning the very last race of the year and keeping that streak alive.

So far in 2018, Hamlin has not won a race.  He came very close last week at Indianapolis Motor Speedway. However, a crash with six laps to go brought out a caution that erased his lead.  A three-lap shootout to end the race gave Brad Keselowski a final opportunity to snatch the win away from Hamlin, which he did.

Hamlin was understandably frustrated after the race.  If not for the late caution, he probably would have won his first race in a year. It would have been his first at the hallowed grounds of the Brickyard, earning him an additional five playoff points just as the postseason was set to begin.  At the time, missing out on a win at Indianapolis was probably what will hurt the most.  But after a disastrous race at Las Vegas Motor Speedway, Hamlin could wind up missing the playoff points more.

With only 20 laps of the scheduled distance remaining, Hamlin spun off the exit of Turn 4 and went sliding into the infield.  The No. 11 car’s splitter dug into the grass and ripped the nose of Hamlin’s Toyota to shreds.  The damage effectively took him out of the race and produced a 32nd-place result.

It could have been worse.  Hamlin was far from the only playoff driver to encounter trouble in Sin City.  Kevin Harvick blew a tire and crashed shortly before the end of the second stage, taking Erik Jones with him.  Chase Elliott could not avoid Jamie McMurray’s spinning car and left the race in another hard crash.  Alex Bowman, Jimmie Johnson and Clint Bowyer all got jammed up on a late restart, sustaining damage and cut tires.  Kurt Busch got collected in a multi-car accident that brought out the race’s 12th and final yellow flag.  His brother Kyle had an adventurous day, spinning through the grass similar to Hamlin.  Fortunately for Busch, the infield grass did not damage the nose of his car.  He rallied to finish in seventh after struggling most of the day.

Hamlin’s Las Vegas result may put him in good company, but he is the one who sits 16th in the playoff standings.  He leaves Las Vegas 20 points behind Bowman, who holds the final transfer spot.

It is not completely unfamiliar territory for the No. 11 team.  Back in 2014, during the first elimination-style playoffs, Hamlin went into the final race of the first round below the cutline.  He fought his way to a 12th-place finish at Dover International Speedway and earned just enough points to advance.  In fact, Hamlin went all the way to the championship race at Homestead-Miami Speedway despite his rough start to the postseason.

It is reasonable to suggest that the No. 11 team is better this year than it was in 2014.  With nine races still to go, Hamlin has already equaled his top-five total from four years ago.  While he is still four top 10s behind his 2014 total, the average finish is a little better (12.9 versus 14.3).  One bad race will not finish off Hamlin’s championship hopes.

Yet the 2014 championship format offered less bonus points for regular season wins than the current system.  Those bonuses also did not roll over to the next playoff round like they do now.  Without any wins to fall back on, Hamlin took only three playoff points into this year’s postseason.  Compare that to 50 for Harvick, who has been winning races left and right in 2018.  Despite finishing worse than Hamlin at Las Vegas, Harvick is 38 points to the good of the cutline. He’s in far less danger of not advancing than Hamlin.  Harvick’s regular season wins could keep him in the game.

Perhaps Jones is a fairer example to Hamlin.  Jones’ only playoff points came from his win at Daytona International Speedway this July.  But even that one win has given him an advantage over Hamlin in the playoff standings, if only by a single point.  More importantly, Jones and the No. 20 team have the experience of winning a race together in 2018.  Although he is in the Monster Energy NASCAR Cup Series playoffs for the first time, Jones carries the knowledge that he has won a race this season.  Given Jones’ run of good finishes heading into the playoffs, there is reason to believe that his team is performing well enough that the No. 20 can claw its way back into contention.

On the other hand, Hamlin’s team is more of a question mark.  The No. 11 crew cannot point to that one race in 2018 where everything went right, or at least well enough that Hamlin won.  Instead, there are a few races like Indianapolis last week, or even the Daytona 500, where Hamlin had a solid run, but ultimately did not close the deal.

Richmond Raceway offers a chance for Hamlin and his team to have that perfect night.  In the last six races at the Virginia short track, Hamlin has not finished worse than sixth; he won the fall race there in 2016.  A victory would give Hamlin automatic passage to the next round of the playoffs, break a long winless drought, and keep his streak of at least one win each season alive.

Otherwise, his championship hopes could soon be over.  In a season where the pressure on Hamlin to win has been steadily mounting, it only got higher after Las Vegas.

Poor whiner Denny. Sure feel bad for him.

He needed violin music in the background. There would have been more tears.