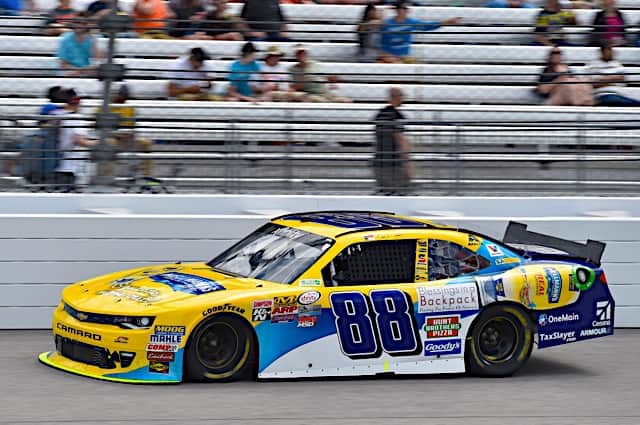 For the first time in NASCAR competition this season, Dale Earnhardt Jr. will strap on a helmet, buckle up and pull those straps tight for what could be the final time.

Earnhardt, 43, retired from full-time competition following the Monster Energy NASCAR Cup Series season finale at Homestead-Miami Speedway last season. Fast forward 44 weeks, and he will drive the No. 88 JR Motorsports car in the XFINITY Series this weekend at Richmond Raceway, a race that was scheduled prior to announcing his retirement last April.

It’s safe to say Earnhardt is happy to be getting the opportunity to drive again.

“I’m looking forward to it,” he said recently. “I didn’t miss racing at the start of the year at all. When I got back to the broadcasting and started to really plug into what the races were like and what was going on, you see moments in the races that make you wish you were out there doing that. And so I started to miss it a little bit.

“I like Richmond as a track. And it’s a pretty straightforward little racetrack. We have had success there. I’m not really putting any expectations or pressure on myself as far as performance. I just want to go run and have fun.”

Over Earnhardt’s historic NASCAR career, Richmond has been one of his standout racetracks. In 36 career Cup starts at the .75-mile D-shaped oval, Earnhardt has three victories, the last of those coming in 2006. Meanwhile, he’s finished in the top 10 on 14 occasions, leading 514 laps.

Different series, same results when it comes to XFINITY. Earnhardt has four checkered flags in seven career XFINITY starts at Richmond. He has one additional second-place finish, coming when he made his debut at the track. He drove the No. 88 to Victory Lane in 2016, his latest NASCAR victory.

His goals for this final race, however, are fairly straightforward.

“Hopefully I get to run all the laps and just enjoy driving the car,” he said. “The only reason you get behind the wheel of a racecar is because it’s fun and you enjoy the competition. Hopefully, those are things that I get out of it and try not to get real competitive about it. I don’t want to sweat over every lap and how fast we are in practice and all those things and make it miserable.”

He’ll be racing against some teammates (and, for that matter, employees) for whom there’s a lot at stake. Richmond is the opening XFINITY playoff race. As an owner, Earnhardt has three drivers in the postseason, including Justin Allgaier, who won the regular season championship. Elliott Sadler will be making his final planned NASCAR start at his home track, while Tyler Reddick hopes to continue momentum gained from Darlington Raceway and Indianapolis Motor Speedway. Michael Annett, the team’s fourth full-time driver, failed to qualify for the postseason.

As for the future, Earnhardt isn’t sure of other opportunities that will lend itself in NASCAR, specifically the XFINITY Series. That means Friday night (Sept. 21) could be the last time he ever competes in a sanctioned event.

“It’s the only time I’m going to race a car this year,” he said. “And it may be the last time I race a car. I really don’t know what our plans are going forward. I don’t really have any initiative to drive a ton of races. We’ll just kind of see what kind of opportunities there are down the road that help the rest of the company.”

Nobody misses your no driving a**! Just go away. Nobody misses Danica either. You have ruined TV broadcast, have to watch with sound muted.

I wonder what his appearance fee is? It will keep him out of the booth but he’s sure to be mic’ed for the telecast. I guess he needs the extra money.

I don’t even think Jr fans care about this.

A lot of hate for Junior here. Personally, while I was never a fan of the #88 team, I didn’t have a problem with Junior. He rarely whined or acted entitled, and he raced his competitors cleanly. In my opinion, the dislike for Junior boils down to three things…. he was never a great race car driver like his father was, which is not his fault; he drove for Rick Hendrick, which was purely a smart business decision for the both of them; or the fact that he was overhyped, which, again, was not his fault. Who can fault the guy for doing what he wanted to do, and making a good living doing so? Every one of you would do the same. So he’s going to run an Xfinity race… good for him.

Looking forward to watching Dale Jr. Hope he has fun. As someone who followed a successful father in the family business I know Its not always fun.

I thought he already had his last “NA$CAR start.” I wonder how many more there will be.