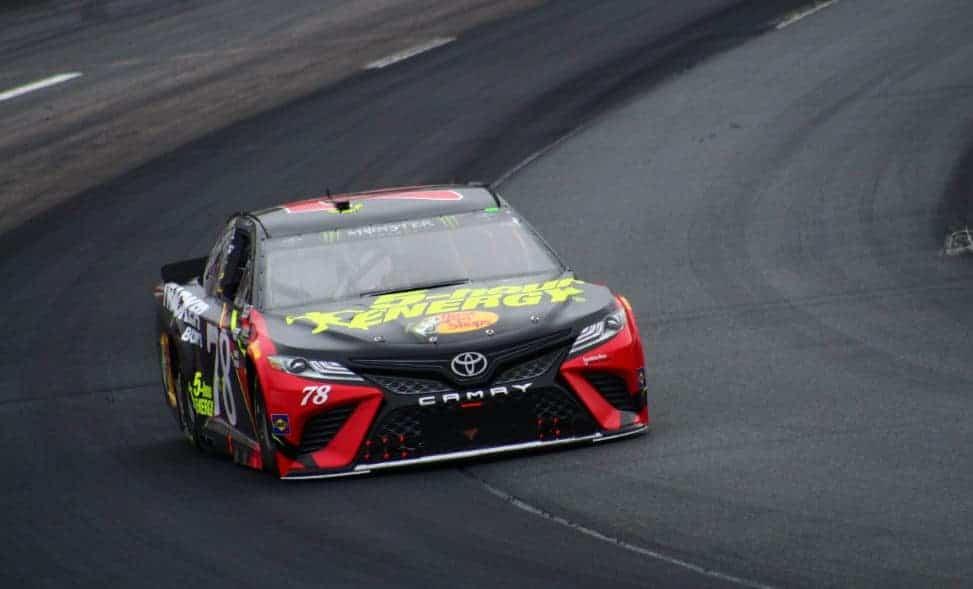 Did You Notice? … How stage points, even on a driver’s worst day, can minimize the damage during the NASCAR playoffs? Brad Keselowski may have won the battle Sunday (Sept. 16) at Las Vegas Motor Speedway, but it’s the Big Three whose efforts keep winning the war.

It was a difficult day behind Keselowski for the trio of main title contenders, Martin Truex Jr., Kevin Harvick and Kyle Busch (seventh after a mid-race spin and a flurry of problems). Truex, despite leading the most laps (96), finished third during the onslaught of final restarts with a car that failed to match Team Penske’s short-run speed.

It’s that type of slippage, combined with over half the playoff drivers experiencing major issues, that have people wondering if the championship has been broken wide open.

But Truex finished first where it really matters right now: points. He scored two more than winner Keselowski through earning 18 bonus points in the first two stages. That left him extending his margin over Keselowski from 16 to 18 even though he got beaten on the racetrack.

That stage protection also helped Harvick immensely after the No. 4 car crashed out in the middle of stage two. A nine-point bonus in stage one meant he earned 10 points instead of one; it’s the equivalent of a 27th-place finish. Ideal? Certainly not. But a guy who had 47 points over the cutline only saw that margin shrink to 38. And that race was one of Harvick’s worst days.

Play that scenario out two more times. Wrecks at Richmond Raceway and Charlotte Motor Speedway’s ROVAL that unfold in much the same way would still have Harvick cruising into the Round of 12 by 20 points! It makes you realize how important playoff points are in making the top drivers this season near-invincible heading to Homestead-Miami Speedway in November. Remember, Harvick earned 50 bonus points through seven wins, multiple stage victories and his points position during the regular season.

So what, you might be saying? Isn’t that what fans wanted all along — the best drivers in the regular season to have a cushion so they don’t get knocked out from a championship they deserve to fight for? You’re right. This system works well in giving the top seeds a bye, so to speak, through the first round (maybe two) in the playoffs.

It’s the number of races in the postseason that take their plight too long to play out. In a sense, we know Truex, Harvick and Busch have basically clinched a position in the Round of 8. But we have to see them race around and basically wait while a series of challengers are selected for the three races (Martinsville Speedway, Texas Motor Speedway and ISM Raceway) that are really going to matter.

I’ve mentioned before in this space how the playoffs could easily be shrunk to 12 drivers and seven races. That’s a closer match to its lower-tier divisions (XFINITY and Camping World Truck series). The racing at Vegas, while fantastic, reminded us of why a shorter postseason might be a smarter idea down the line.

Did You Notice? … How much sponsorship has become a factor in forming the current NASCAR field? The top Ford team this season, Stewart-Haas Racing, even admitted the money a driver brings helps influence whether they get a ride.

“How much sponsorship are we talking? How much money does SHR get?” co-owner Gene Haas told NBC’s Dustin Long. “How much money does the driver get? Those are the kind of typical things that can take a while to iron out because everybody wants everything.”

The business portion is nothing new; we’ve seen drivers who bring money get rides over pure talent for well over a decade now. What’s different is how the stress of collecting that money could be causing drivers over time to turn away from the sport.

Justin Fontaine’s retirement letter is the most public indication of that. Fontaine, running as a rookie underdog in the Camping World Truck Series, announced he’ll pull back after the season at 20 years old.

The key line in here was, “The reality of making those [racing] dreams come true are much more complicated, and in many ways out of my control.”

Fontaine appeared to be referring to the corporate end of the sport, searching for sponsorship, which has nothing to do with driving talent. Subpar equipment can often lead to subpar finishes; how do you fix that? By jumping in the boardroom and finding a company who will give you money. That’s not exactly the type of healthy sports competition by which the rest of America’s athletes are judged.

“Who can deliver the best sales presentation with the slickest suit before sliding back behind the wheel? Let’s view conference rooms one, two and three here on NBCSN to find out.”

Fontaine isn’t the only one to flame out on the money side of the business; he’s just the most public about it. Cole Whitt, in the midst of scaling back with TriStar Motorsports, appears to be burned out in much the same way. Josh Wise, now retired as a driver, went public about his frustrations to Frontstretch last year.

“I would come home on Sundays and just be like not in a good place,” he said. “On Monday, Tuesday and Wednesday, I wasn’t in a good place because I was dreading what we were going to have to go through the next weekend and just wanting more than what I was capable of at that point of my career.”

It’s one thing for someone like Wise to move on in his mid-30s. But Fontaine is only 20. Whitt is 27. Drivers at younger ages are becoming disillusioned by the realization their talent means nothing in an age of a broken business model.

Stagepoints – that word right there, the smoking gun that is basically killing the sport right now…

You can hype it all you want, I attended so many races from the late 80’s through the early 2000’s – a time with no stagepoints, no chase, no playoffs, etc. and you couldn’t shoehorn another person in those seats. Now I shake my head every time I see a shot of the stands, unbelievable. I think back to the days I would spend trying to get tickets to Bristol, never succeeded and settled for Martinsville instead (loved it by the way) – now I see a sport that is barely hanging in there, sad days indeed…

Yep…. I agree. Where you’re running a third of the way through the race, or two-thirds of the way, should have no bearing on the championship. Meaningless and convoluted BS.

But Brian changed the POINTS system to make it easier for the fans to understand because that’s what they told him they wanted.

Hey old man – NASCAR does not want you, nor does any other sport. Coke and Pepsi don’t want you. Ford and Chevy don’t want you. Just sit in your rocking chair and live out the rest of your useless days and stop complaining. Your generation had its day. Now please fade away with some dignity, you worthless old fart!

While the Vegas race was excellent, you had to feel for those in attendance. Even a ‘dry heat’ at 100+ is unbearable. I know Vegas wants the the playoff opener, but it might be better off going later in the schedule. When it comes to summer races in the North, I don’t complain no matter the heat. We have miserable winters, I’m ok with 90s in July and August.