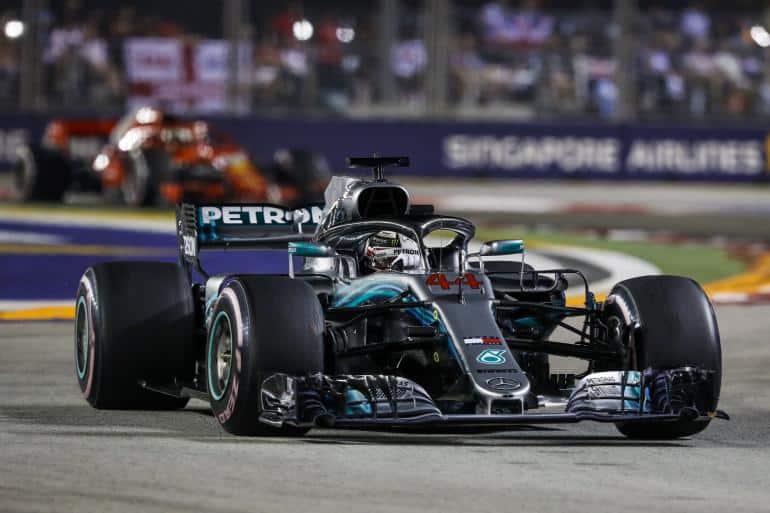 This past weekend in Singapore, Lewis Hamilton and Mercedes did what they have been doing for much of the past four-and-a-half years – put on a clinic. The Formula 1 race on the streets of Yas Marina was supposed to allude to the kind of close-quarters racing where outright speed doesn’t matter, as it does at many other tracks. The three practice sessions conveyed this belief, with Red Bull, Ferrari and Mercedes all mixing it up atop the scoring sheets.

Then Hamilton pulled one of his qualifying miracles, a frequent occurrence for him this season. He pipped the field and used his P1 starting spot to speed away when the lights went out to begin the race. Behind him, Max Verstappen and Sebastian Vettel tussled for the second spot and once Verstappen had it in hand, any challenge for Hamilton was nothing but false hope.

Toto Wolff, the Mercedes boss, spouted some silliness that Hamilton’s win silenced the critics of Hamilton’s jetset lifestyle. Whatever. That storyline was played out two years ago and should have been put to bed last year when the Briton won his fourth driver’s title. Now, he’s certainly poised to win a fifth.

With six races remaining, Hamilton holds a 40-point lead over Vettel in the driver’s championship. Kimi Raikkonen is 107 back in third place. Even though he may be mathematically eligible, reality says that the fight is between two drivers. The 40-point gap is the largest of the season and may not appear insurmountable. However, even with the number of races left, it may require a miracle.

The driver’s championship is fun and entertaining, making for fun headlines but there’s no money in it – technically. As F1 doesn’t reward the driver’s title (which continues to be a surprise and is left to the teams to figure out) the focus is really on the constructor’s championship, where the money gets paid out by team finishing position. At one point, Ferrari looked like they were poised to take over the top and run with it. But just like the Prancing Horses botched Vettel’s run in Singapore, they’re seemingly botching a season when they should be cruising home with the constructor’s trophy. Mercedes holds a 37-point lead in this fight as well, giving them an opportunity to top both charts.

This championship is the one that might be more entertaining as the season hits its homestretch. Right now, history favors Hamilton leading Mercedes to another title there as well.

– There are good days and bad days. Days when the sun is shining, traffic is negligible, parking is easy and the morning beverage is delicious. Then there are days when it’s raining, traffic sucks, parking is a masterclass in frustration and the morning beverage should be thrown out. There are days like kicking the game-winning field goal and there are days like the Cleveland Browns kicker had this weekend against the New Orleans Saints. All that is to say that mood and performance is a fickle thing.

So let’s turn our attention to Sergio Perez of Force India. To say that Perez and his teammate Esteban Ocon have an uneasy past is to say that Kim Kardashian and Kanye West have a quiet relationship. The fact that Perez and Ocon are still teammates at all is something worth considerable exploration. But the fact that they (1) don’t seem to be able to get away from each other on track has led to (2) they seem to like to bring about the other’s bad days.

All it took was two turns in the Singapore GP for Perez to push Ocon into the wall, sending the latter out of the race. Ocon, to his credit, handled the DNF with grace. But he surely felt a world of hell as his future in F1 becomes all the more uncertain.

Perez, on the other hand, drove a tolerable race and then went mental again, this time on Sergey Sirotkin. After struggling for 17 laps to pass the Russian driver, Perez managed to pull alongside, swipe Sirotkin, then continue on his way.  The move earned Perez a drive-through penalty and helped bring him home 16th.

To say that this race was not Perez’s best is an understatement. Yet, it is also typical of the kind of races that Perez has every so often. The move to keep Perez over Ocon is mainly a financial one and shows how Ocon may be the better fit, but money always has a little more pull.

– Fernando Alonso may be taking next year off, or retiring, or doing whatever it is that Alonso wants the world to believe (competitive fly fishing?) But Sunday’s drive was the kind of thing that will be missed. McLaren has been slow for three years now and Alonso, through a crafty bit of driving, stole seventh. He managed his tires, pitted at an opportune time and never put a wheel wrong. Had he been in a car worthy of his talents, the effort should have brought a podium.