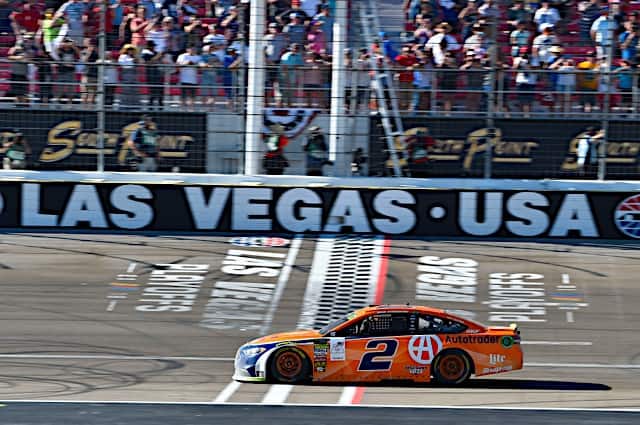 We have seen multiple NASCAR races this season where the temperature has been sky high — as in, 100 degrees and very, very hot. Many drivers and fans love this scenario, because it creates the best racing.

However, there is an argument to be had about the safety for fans sitting out in the weather. Some might say they should sit there and tough it out. However, we saw others take cover in the shade at Las Vegas Motor Speedway’s Monster Energy NASCAR Cup Series race last Sunday. They missed most of the event because it was too hot for them to handle.

What can be done about this problem? Should NASCAR move the race time for the safety of fans?

And what about that Camping World Truck Series schedule? A month-long break is bearable at the beginning of the season, but it’s a true momentum killer when the series is in the midst of its playoff run.

Q: Do you think it’s a good idea for tracks like Las Vegas to hold races in the months where 100-degree temperatures are possible, like we saw Sunday? Should they move the time for the safety of fans and drivers? Bill W., San Francisco, CA

A: This weekend is about the third race this summer where temps have been above 100 degrees. To say it’s unsafe to race in those conditions can be fair, but the physical fitness of these drivers is at an all-time high. They know how to prepare for races like Vegas and they are fine with it.

Fans, though? While it is enjoyable to see good racing when the temperature is that high and the track is hot and slick, I am not sure it is safe for them to sit out in that weather.

Chicagoland Speedway was another good example of a situation like this one for fans and drivers. This July weekend, the heat index reached about 110 degrees. After both the XFINITY and Cup series races, multiple drivers were winded, needing to catch their breath and hydrate. We saw Chase Elliott go to the infield care center Saturday because of how hot that track was.

Is it a good idea for NASCAR to hold daytime races during the summer in places like Vegas or Chicago? I do not believe so. But it does create the best racing when the weather is hot. Although many love night racing, the competition is not as good as it is in the middle of the day. There has been proof of that at so many tracks.

Short tracks would be a different story. Racing there seems to be just as good, day or night, with the exception of maybe Richmond Raceway. Intermediate tracks definitely produce a difference, though.

While we can always hope we see hot weather to create the great racing we saw at Vegas or Chicago, it is also reality that summer is just about over. Fall will begin very soon and with it, temperatures will begin to cool off. Dover International Speedway, Kansas Speedway and Martinsville Speedway are all held during that cool-down period. All three places, however, can vary wildly during this time period temperature-wise. It’ll either be 70 degrees or it can be about 45-50 degrees at this trio of tracks.

The NASCAR schedule is the same next year as it was this year, so 2019 could produce more of the same weather-related problems. The advice for fans is to hydrate and prepare for the heat because I do not believe NASCAR will move the race just because of 100-degree weather. That has yet to be determined, for sure, but I expect to see race times stay the same.

Q: What do you think of the break in the Truck Series schedule? Good idea to have a month off or bad for teams, drivers, fans, etc.? Aubrey K., Tallahassee, FL

A: I am not a fan of the month break between races in the Truck Series, especially during playoff time. The Trucks are approaching the final race of its first round, and to have to wait a whole month just to get to the cutoff race is ridiculous.

The break is exacerbated just because it is playoff time. Everything feels like it should be in a narrow time gap, then rather than spread out like it’s been. By the time we get to Talladega in the Cup Series, for example, it will already be the middle race of the second round. To compare with the Truck Series, that division just started their first round this past weekend.

In my opinion, playoff races should be held consecutively with no weeks off. The postseason is the most exciting time of year, and to have to wait as long as we have to is no fun for anyone. Yes, it gives teams an opportunity to work on their programs. But at the same time, it’s stressful for the drivers having to deal with one month of waiting for whether or not they will make it out of the first round. What will happen at the great unknown of Talladega?

The Truck Series is arguably the most exciting one in all of NASCAR, and its first two races of the playoffs have been incredible. The Trucks have a shorter season than Cup and XFINITY, but waiting a month is way too long. I wish NASCAR would find a way to spread their schedule out more during the regular season. That way, come playoff time, the space between races would be far less. It would be a challenge right now with the current schedule, but it can be done.

No matter what, though, Talladega will be an extremely exciting race. The battle to get into the top six will be amazing. We might see the best elimination race we have ever seen in the series, just because of the desperation and the drivers on the bubble, including Matt Crafton, Noah Gragson, Ben Rhodes and Stewart Friesen. All of those drivers are ones who are not afraid to do something crazy to win a race. It will be extremely fun to watch when we get there, that is one thing for sure.