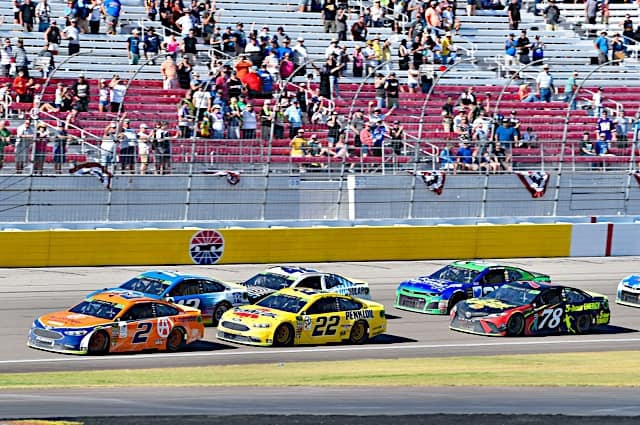 The last time the Monster Energy NASCAR Cup Series raced at Las Vegas Motor Speedway in March, a championship contender arose in the form of Kevin Harvick. And when the series came back around to Vegas last weekend, another driver was feeling lucky, topping our NASCAR power rankings in the process.

Brad Keselowski had zero wins before capturing the Southern 500 earlier this month. He then secured a victory in the Big Machine Vodka 400 at the Brickyard, and on Sunday (Sept. 16), Keselowski secured his third straight victory in the playoff opener at Las Vegas.

It just so happened it was also Roger Penske’s 500th win in motorsports.

The hot temperatures also resulted in hot tempers at Vegas. Expect more emotions to flow from some drivers on the outside looking in as we go short track racing Saturday night at Richmond Raceway with just two races remaining in round one of the playoffs. They’ll definitely boil over before the unknown mystery of the Charlotte Motor Speedway ROVAL, leading to mistakes that could send some shocking names out of the playoffs early.

Keselowski has really grown into this 2018 championship contender role, as the guys who had been in the spotlight all season have kind of taken a backseat to his recent domination. Three straight major victories for the No. 2 car makes one wonder if the championship is right around the corner for this team.

Kyle Busch had an all right day at Vegas and got extremely lucky as well, as his car slid through the grass at one point but didn’t get torn up, unlike teammate Denny Hamlin‘s incident. Busch just needed to finish on Sunday to keep his title run on track, and that was exactly what he did. The fact he finished seventh despite all his woes only helps matters.

Said no one… Ever https://t.co/EA1vVCtdHe

Goodyear tires are garbage? Haven’t we heard this statement before out of the Stewart-Haas Racing camp — or from a certain someone in that camp? Oh, yeah, Atlanta Motor Speedway with team co-owner Tony Stewart a few years back.

Tires were falling off so badly Sunday, but Goodyear wasn’t fully to blame; with it being 100-plus degrees outside and the track even hotter, those tires weren’t going to last.

Harvick just needs to keep it off the wall the next two weekends to move on in the playoffs, but clearly, you can see he’s concerned.

A frustrating start to the #NASCARPlayoffs for @KevinHarvick.

Not even a healthy point cushion gives him any comfort at @LVMotorSpeedway. pic.twitter.com/CUQMafPUif

Martin Truex  Jr. surprised at Vegas by getting out of that rut he’s seemed to be in lately (a downturn that certainly hadn’t been helped by the news of Furniture Row Racing’s closure at the end of the season). A third-place finish combined with a race high 96 laps led.

If Truex can run like he did on Sunday, he will for sure be a threat for the championship — lame duck or not.

Burnouts for days! Chase Elliott had a rather rough day on Sunday at Vegas, but one notable thing he left Sin City with was an amazing burnout he and Ryan Blaney did during the events around the city leading up to Sunday’s main event.

A 36th-place DNF in the race, though leaves Elliott outside the top 12 in the standings.

Maybe the coolest tweet I’ll ever share … in-car of @chaseelliott and @Blaney nose-to-nose @NASCAR #BurnoutBlvd fueled by @SunocoRacing. The end is worth it. #Epic pic.twitter.com/KNNc5Q3MG9

Every driver will face bad luck eventually, and on Sunday, Erik Jones experienced just that. He started from the pole but couldn’t hold on to lead the first lap. From there, the driver of the No. 20 was just hanging on, struggling to stay inside the top 10.

When Harvick lost his tire, Jones had nowhere to go, and he ended up hitting the No. 4, destroying both cars.

Not the way we wanted to start but we’ve got the team and the determination to do it. We’re going to be fine. We can only control our race.

Even Vegas native Kurt Busch wasn’t immune from getting involved in accidents on Sunday. Busch was involved in the last wreck of the race that put out the red flag with Michael McDowell. Before then, he was having a solid day and was likely to leave Vegas with an OK points bubble. Instead, the crash made him a little less of a lock for the top 12.

All three Team Penske drivers were battling for that 500th victory on Sunday, including Blaney, who came out of nowhere at the end to finish the race inside the top five. That has to have the No. 12 guys feeling better about the next two races.

Really special to be even a small part of #Penske500 amazing accomplishment by RP. Congrats boss! https://t.co/zgxWKz4Mvp

Cool, calm, collected was the way Aric Almirola raced in Vegas. Like Blaney, Almirola was mostly written off before the race, but now he’s in better standing than some of the other drivers in the playoffs. He needs to keep the attitude he had on Sunday to move into the next round.

If he gets there, it helps that Talladega Superspeedway is forthcoming in this round, as Almirola has a fairly stellar track record at restrictor plate tracks across all NASCAR national series.

I'm really proud of our effort today. We fought hard for that 6th-place finish. If we keep this up and if we can have a smooth race next time around, we're gonna be a contender.#Almirolling pic.twitter.com/WOJWhYEmFH

If you’d asked Alex Bowman after Indianapolis Motor Speedway about his championship hopes, he probably wouldn’t have had much to say. But the Hendrick Motorsports organization had solid speed on Sunday with both Jimmie Johnson and Bowman, even though Bowman ended up 19th .

If Bowman can maintain that speed at Richmond and the ROVAL, paired with a little more luck finishing-wise this time, he could spoil a good chunk of playoff brackets.

Too funny, every week.

Another Viewpoint
Reply to  kb

KB. Too stupid, every day.

kb
Reply to  Another Viewpoint

Wow!!!!!!!!!!! What name will you have next week? Same old same old….from some freak that does not have the testicular fortitude to stand by his original “name” and debate the merits, but it seems a “LOL” is all it takes from me to set you off. I am rent free in your pea brain! Go fluck yourself asshole!