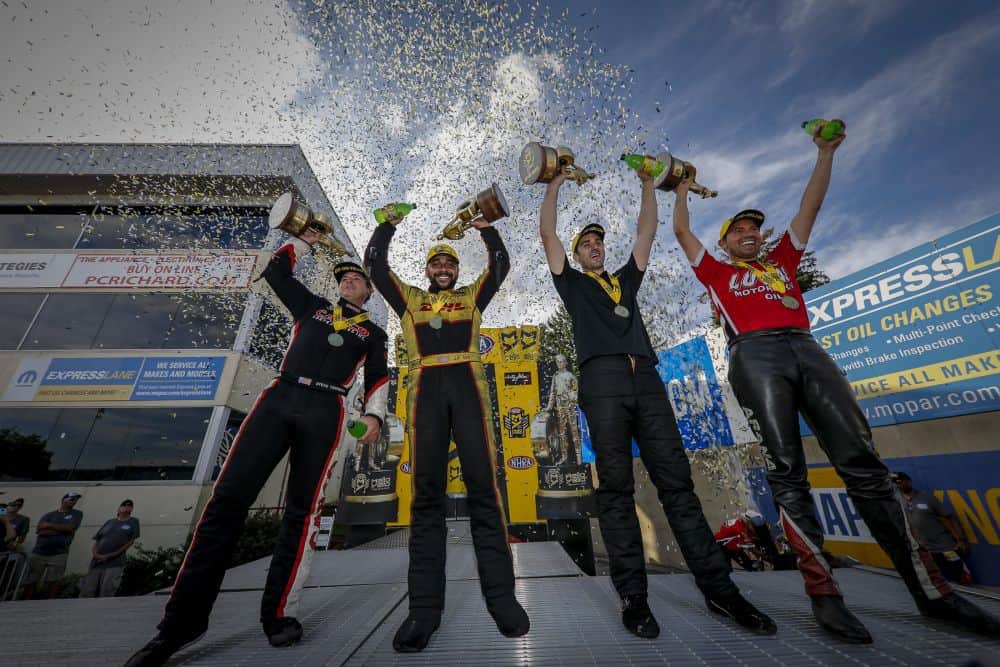 It seems like the 2018 season just started, and now there are just five more races to go before it’s all over — five races left for drivers to make their championship dreams come true this year. Four capitalized on that opportunity by winning the first event of the Countdown at Maple Grove.

Steve Torrence went in as the Top Fuel points leader and, on the strength of the win, came out the same way. He got to work early on growing his points lead once again, a lead that was cut to just 20 markers going into Reading. He now holds a 50-point lead over second place Clay Millican.

Still, as Torrence learned last year, the Countdown is no time to let up or risk losing momentum, because someone else is likely taking advantage of the points reset that closed the margins at the start of the Countdown. The game is all about who gets hot at the right time, and with a smaller gap to make up, anything can happen.

Speaking of getting hot at the right time, J.R. Todd did not enter the Countdown atop the Funny Car standings — that honor went to Courtney Force. However, after nailing down his second victory in a row, he’s the leader now, moving from fifth to first.

Todd has momentum on his side, holding a 23-point lead over Force’s teammate, Robert Hight. Force fell to third, although she’s only two points behind Hight. This would be a terrible time for season-long leader Courtney Force to falter. It’s too early though to push the panic button. She’s still very much in the fight.

Pro Stock has been up for grabs most of the season. Tanner Gray looked to be the most recent driver on a hot streak in the class and entered the Countdown as the number one seed, but Vincent Nobile has served notice that his team might have something for them.

Gray still leads, but Nobile lept into second place, just 18 points behind Gray. Nobile went into Maple Grove in fifth, making nearly the same leap up the standings as Todd.

Pro Stock Motorcycle tells much the same story. Eddie Krawiec is still atop the standings, but a win in Reading propelled Hector Arana Jr from fourth to second, just 18 points out of the lead.

This early part of the Countdown will likely see a lot of movement in the standings before a clear picture starts to emerge of who the real contenders will be by the last few events.

On another note, Reading featured the debut of one of the sport’s next generation drivers, Cam McMillen, five-year-old son of Top Fuel driver Terry McMillen, who made his Jr. Dragster debut in a scaled down version of his father’s Amalie Motor Oil Top Fuel entry.