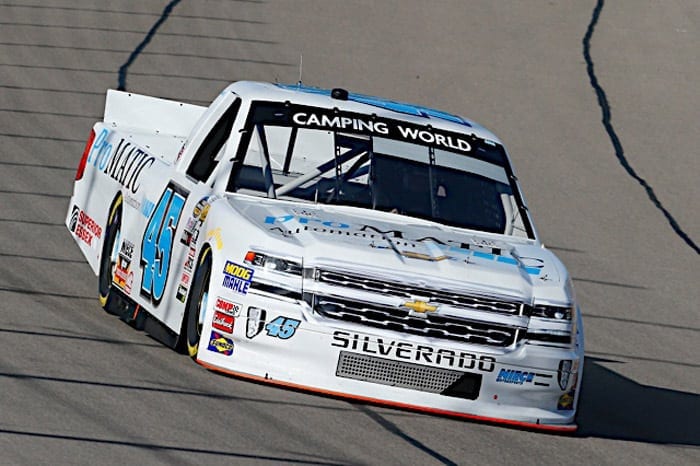 When the checkered flag flies over the season finale at Homestead-Miami, it will also mark the indefinite end of Justin Fontaine‘s motorsports career, “barring a major influx of sponsorship funds.”

Fontaine becomes the latest driver to hang up his helmet across the sport in recent years after “careful consideration” that he outlined in a long form letter posted to Facebook and Twitter. But where it comes as a surprise is that the 2018 Rookie of the Year competitor is just 19 years old, while others who have walked away were nearing or already past 40 and had run full careers.

On the other hand, Fontaine just signed on for his rookie season in the Camping World Truck Series, piloting the No. 46 Chevrolet for Niece Motorsports alongside Austin Wayne Self. Prior to this year, he had three series starts over the 2016 and 2017 seasons.

Fast forward to 2018 and Fontaine opened up the year with a 10th-place finish in the season-opener at Daytona International Speedway. He followed it up with a 19th at Atlanta Motor Speedway and jumped right back with a ninth-place result at Las Vegas Motor Speedway. But that’s when it started to go downhill for the 19-year-old.

“Following the event at Charlotte Motor Speedway in May, which I retired early due to self-inflicted on-track accident, I went back to the hauler and literally broke down,” his letter detailed. “My rookie season at Niece Motorsports started out strong with two top-10 finishes in the first three races, however, our finishes in the weeks that followed plateaued.

“We had a string of poor results that I had only myself and inexperience to blame,” he continued. “Frankly, it was a bitter pill to swallow, but it became reality. My dad came up to the lounge after the Charlotte race to calm down, and we had an honest conversation about my career and desires.”

Fontaine followed up the back-to-back 30th-place finishes with a 12th-place run before he was involved in a hard crash with Tate Fogleman at Gateway Motorsports Park. Since that wreck, Fontaine has finished every race and has a pair of 14th-place results at Chicagoland Speedway and Las Vegas last weekend.

But despite that top-15 finish, Fontaine released the news he would not be returning next season earlier this week.

“My goals for nearly 10 years have been clear to me, however, the reality of making those dreams come true are much more complicated and in many ways out of my control,” he continued. “The stress for me and more importantly my family is more than I can shoulder any longer.

“We often do not think about the impact our careers have on our families, but I was forced to see it firsthand when my mom, dad and brother walked into my hospital room in tears after the ARCA crash in Daytona that nearly took away my ability to walk in February 2017.”

The wreck Fontaine is referring to here came with just five laps remaining in the season-opening event at Daytona in 2017. He was clipped in the right rear corner and turned head-on into the wall, which is thankfully a SAFER barrier. To make matters worse, Fontaine was also t-boned, which pushed the car on its side where it slid for a while before coming to a rest on its roof.

Once safety crews righted the car, they had to cut the roof to get Fontaine out. He was transported to a local hospital where he was diagnosed with a mild compression fracture of his L1 vertebrae. Fontaine wasn’t cleared to return to racing until the end of May.

“That wrecked aside, the stress that comes from all other facets of professional racing has become more than I could have ever imagined,” his letter continued. “The burden of travel schedules, constant sponsorship rejection and the aftermath of a poor finish has taken its toll.

“While I would like to think this is not the end of my days behind the wheel of a race car, I am content if this is where the journey ends. I have gotten to turn laps at Daytona, shake hands with champions of the sport and live out my dream racing in the NASCAR Camping World Truck Series.

“My perception of the sport has changed drastically in the years I have been involved at a professional level, but my love for racing has remained the same.”

Fontaine’s earlier mention of sponsorship rejection highlights an issue that’s plagued the sport in recent years. From upstart teams and drivers, to proven champions (see: Martin Truex Jr. and Jimmie Johnson), financial backing has been harder and harder to come by as more companies are re-evaluating the return on investment in the sport.

It’s very clear Fontaine is hardly the only driver to face these issues, not only in the Truck Series, but across the board in NASCAR. The difference for him is that he’s one of the few that’s walking away at a young age before he has a chance to become bitter and despise a sport that he still has plenty of passion for.

“I have no regrets from this time in my life, not a single one, and I look forward to seeing what the next chapter has to offer.”

Not the night we wanted… Stranded in New Mexico until we can get everything fixed and back on the road.

Truck took a pretty good beating hitting an elk at 70 mph. Thankfully wasn’t any worse.. all the guys and I are safe and ok. pic.twitter.com/4mHNWbZGzb

We are back on the road headed home!!! It’s been quite an adventure so far.

So grateful to the Barrett family and Danny for driving out here from Texas to pick us up and take the trailer home. ????

Our truck will be staying out in NM until we can figure out how bad it is. pic.twitter.com/34O4YuDyZn