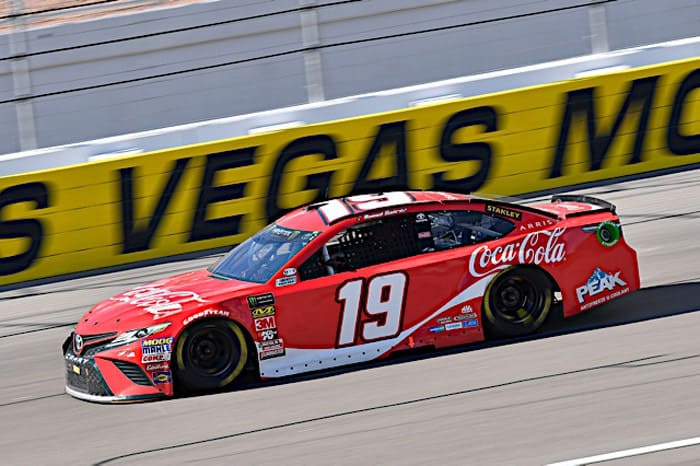 With two stops in Vegas already, should the banquet be there? (credit: Rusty Jarett NKP)

It’s been a while since NASCAR moved its premier series’ award ceremony to Las Vegas. And I get it, Vegas is great. But now that the Monster Energy NASCAR Cup Series races there twice a year, it’s time to move championship week back to where it belongs: The Big Apple. New York City.

The streets of New York got a bit louder than usual each December between 1981 and 2008 when the end-of-the-year banquet was held in the city. NASCAR stock cars were parked throughout Manhattan, with drivers making appearances everywhere from Times Square to the famed Waldorf Astoria New York hotel.

There was nothing like it. I would know; I was there. And it was spectacular.

Sin City, meanwhile, is not where a sport that is trying to rebuild needs to be to hold one of its biggest events, especially when a huge part of the marketing campaign is directed at kids. You know, that whole Kids Drive NASCAR campaign.

NASCAR reportedly this year lost a $400,000 contract with the Las Vegas Convention and Visitors Authority, and that’s a huge problem. After this loss, along with a drop in attendance already for the pair of races at Las Vegas, it’s time to bring the sport’s biggest ceremony back to a place that truly cherished its presence since it’s so rare to see huge racecars lined up throughout the country’s most populated streets.

While NASCAR never received money from New York as it did from Las Vegas, the national exposure year after year did make a difference. People who never knew about NASCAR suddenly found out about it thanks to being in the Big Apple. That might happen in Vegas, but not to the same extent just because of the population of the two cities and the fact that there is already NASCAR racing in the city anyway.

The move to go to Vegas — at first — might have been a wise one; it changed things up after so many years in New York. There are more events during championship week than ever before. It’s more interactive. But what if that came to New York, a city known for its events and interactive distractions for tourists and locals alike?

Plus, Las Vegas doesn’t have nearly the same amount of national media attention as New York does. That should be a huge factor. Drivers can pop up on dozens of TV shows — morning talk shows and late night ones — and set up interviews with international media outlets and, if done right, attract new fans to the sport like never before.

With a NASCAR office smack in the middle of the Big Apple, it would be prime time to set up meetings with potential partners that teams usually don’t see. When NASCAR is in town, it’s a story because it’s so rare. And the sport relies on those rare appearances to get a quick mention or two in a top publication.

The amount of business executives in the city alone is perfect for a sport that is seeing change come at it as fast as the product it puts on the track.

Just this week, NASCAR announced Steve Phelps is taking over as president as Brent Dewar steps aside. Who knows whether or not a chunk of NASCAR will be sold like rumored this entire season. Why not start by attempting to attract some of the nation’s biggest companies, all while going on a media tour in the nation’s biggest and best city?

There isn’t enough national attention for the sport with the awards being held in Vegas. It needs to be in a place where NASCAR can attract more momentum. New York is the place for that, and its strong interactive strategy is the perfect spot for the sport.

Now that NASCAR isn’t even getting an extra check from the city, what’s the point of going back to Vegas just two months after the series raced there? What is the real incentive of Las Vegas?

Two races at Las Vegas Motor Speedway is enough; you don’t need to have the banquet there too. Why not bring it to a place where it will be cherished? It is so unique to hear of anything regarding racecars in New York that people will jump for joy again.

Imagine if just one Fortune 500 executive from New York City sees a car and decides, “I want my company on there.” That could be huge. Did it happen like that in the past? Not really. But times are different, and it’s worth a shot for NASCAR to go to the marketing capital of this great nation. You’re certainly not getting that kind of opportunity in Vegas, at least.

Huge crowds would line up in the streets of America’s busiest city just to hear a single car’s engine get fired up. In 2008, when Jimmie Johnson won title No. 3, he celebrated by hoisting the championship trophy at the Hard Rock Cafe. Hundreds of people were in Times Square just to catch a glimpse of a NASCAR star.

Have drivers make appearances like never before, such as an event at Times Square’s M&M’s World with Kyle Busch and other Joe Gibbs Racing drivers. Keep the cars and drivers in Times Square so traffic won’t build up in other areas. What about having events in Central Park? How great would that be?

Imagine what the creative folks at Monster Energy would do if they had a chance to showcase their product in New York.

Oh, and bring the banquet to a popular spot, invite fans to be a part of it, and you’ll have success for this event unlike ever before. Not only would it attract the New York crowd, but Long Islanders and people from Upstate New York, New Jersey and even Philadelphia would also come out, in addition to fans from across the country opting to use the week as an excuse to also visit New York as tourists.

While Nashville and, of course, Charlotte, have wanted to host the awards, what good would that do? Everything around NASCAR is in Charlotte. As hard as the sport tries, it doesn’t get the emphasis it deserves because it simply isn’t the country’s center of news.

NASCAR owes itself a shot to get back in the spotlight. New York can do just that.

With a smaller NASCAR media core, New York media will do a whole lot more for the sport than anyone can imagine. It’s time to bring the awards back to New York. Let’s make it happen.

I’d like to take a few moments to respond to the idea that NASCAR should consider returning it’s Championship week to New York City. I don’t agree with Mr. Wolkin’s assessment. Here’s why I don’t agree. Full disclosure: I am a native New Yorker, born and raised.

“Imagine if just one Fortune 500 executive from New York City sees a car and decides, “I want my company on there.” That could be huge. Did it happen like that in the past? Not really. But times are different, and it’s worth a shot for NASCAR to go to the marketing capital of this great nation.” There is no factual basis for this preposition.. Given NASCAR’s current woes with declining ratings and attendance, why exactly would any company who isn’t already involved wish to be now?

“Huge crowds would line up in the streets of America’s busiest city just to hear a single car’s engine get fired up.” I walked by Jeff Gordon’s DuPont Chevrolet show car on my way to lunch from work in 2006 and was able to get right up to the car without having to push, shove or wait behind a large crowd. Why, Mr. Wolkin, do you believe things would be different 13 years later? This sounds like wishcasting more than a factual statement.

“Oh, and bring the banquet to a popular spot, invite fans to be a part of it, and you’ll have success for this event unlike ever before. Not only would it attract the New York crowd, but Long Islanders and people from Upstate New York, New Jersey and even Philadelphia would also come out, in addition to fans from across the country opting to use the week as an excuse to also visit New York as tourists.” Like the first statement, this is based more on hope than facts. While the tourist part may be true, I’m not convinced that there are that many NASCAR fans in the northeast who care enough about the sport to make this work.

Other factors to consider: The New York media market isn’t what it was (one of our dailies, the New York Daily News, is operating with a skeleton crew. The New York Post, owned by Rupert Murdoch, might care because NASCAR races are shown on Fox and FS1, but that’s somewhat doubtful). Also, at this time of the year, the NBA (New York Knicks and Brooklyn Nets), the NHL (New York Rangers and Islanders, who play part of the time in Brooklyn, as well as the New Jersey Devils) and the New York Giants and Jets (yes, they both play in New Jersey, but New York claims them), NYCFC and the New York Red Bulls of Major League Soccer, have either begun their seasons, are well into their seasons or will be starting their seasons within the next month and a half. And, to top it off, the New York Yankees of Major League Baseball are fighting for a wild-card berth in the playoffs. That’s 10 professional stick and/or ball sports teams in the tri-state area. Do you honestly think the media here will turn their attention away from those sports for a sport with only a peripheral connection to the area (Martin Truex, Jr. is from New Jersey)? When George Steinbrenner IV announced this week he was partnering with Harding Racing in IndyCar, it didn’t get a mention in any sports media that I know of other than YES, which is owned primarily by the Yankees. Why, then would the New York media care about NASCAR”s banquet?

NASCAR may have been able to get attention in New York when it was considered the “next big thing”, back in the day, but that ship has long since sailed.