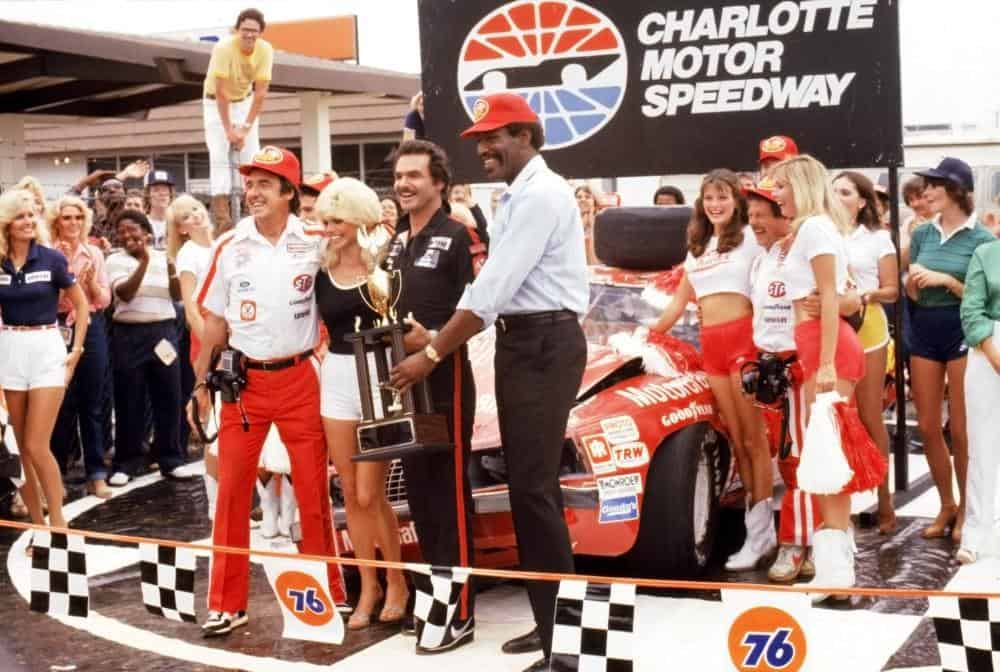 Unless you live under a rock, you’re probably aware that legendary actor Burt Reynolds died two weeks ago.

If you were a NASCAR fan in the 1970s and 1980s, you may have idolized Reynolds, who became a southern folk hero from films such as Smokey and the Bandit, The Cannonball Run and, of course, Stroker Ace — one of the first movies to have a plot revolving around NASCAR.

Reynolds turned down the Academy Award-winning film Terms of Endearment to play the title character in Stroker Ace for his longtime director and friend, Hal Needham. The film was a commercial and critical failure in 1983 but since has developed a cult following among NASCAR fans.

Part of the film’s recent reverence is due to nostalgia, as the movie gives an accurate depiction of what NASCAR was like in the 1980s. Reynolds and Needham were the co-owners of Harry Gant’s No. 33 Skoal Bandit car during the 1980s, so they had a pretty good idea about NASCAR culture. You even get to see drivers such as Gant, Ricky Rudd and Kyle Petty when they were young, and it gives a glimpse of drivers gone too soon, like Dale Earnhardt, Tim Richmond and Neil Bonnett.

Some elements and jokes of the film have aged terribly over the past 35 years, and a few of the plot points and action sequences seem cheesy now. But one thing about the film is truer today than it was in 1983: that sponsorship rules NASCAR.

In the film, Stroker Ace is a multi-time NASCAR champion, but his career is in peril because he can’t keep a sponsor. Doesn’t that sound a lot like defending Monster Energy NASCAR Cup Series champion Martin Truex Jr, who has now lost NAPA Auto Parts and 5-Hour Energy as sponsors over the course of his career? And to add insult to injury, the loss of 5-Hour comes right after it made Truex do all of those lame commercials.

Unlike Truex, it’s Stroker Ace’s fun-loving, rebellious attitude that costs him sponsorship — traits that fans clamor for from drivers today but rarely get because few want to say or do anything that could offend a sponsor.

Desperate for another sponsor, Stroker Ace is essentially tricked into signing his life away to Clyde Torkel’s Chicken Pit. Sure, Ace gets a championship-caliber car out of the deal, but at the cost of his pride and personal life. Torkel has Ace make appearances at his numerous chicken restaurants and in TV commercials, all while wearing a chicken suit. Everything that Torkel forces Ace to do damages the image and reputation that the NASCAR champion previously had in the garage and with the fans.

These many situations that Stroker Ace is forced into by his sponsor were inserted into the film as hyperbole — they were such highly exaggerated situations that were meant for comedic relief. The not-so-funny part is that it’s not that big of an exaggeration anymore. NASCAR drivers are now more controlled by their sponsors than they ever have.

The only difference between Stroker Ace and today’s drivers is that Ace got fed up with his deal and tried to get fired. Today’s drivers would graciously meet every demand in hopes that the sponsor would write a check for another race or two.

This might not necessarily be the case for established drivers like Kyle Busch, Kevin Harvick or Denny Hamlin, or drivers whose sponsors come from daddy’s money, but if you look at the drivers trying to make it, it can get a little ridiculous.

At Martinsville Speedway earlier this year, I went up to Camping World Truck Series driver Robby Lyons before the race and noticed him taking picture after picture with his sponsor for the race, Bubba Bear Sauce. But it wasn’t just a regular photo shoot. Lyons had on the head part of a bear mascot costume the whole time his sponsors were getting their picture taken with him.

I thought Lyons was goofing around at first. I made a joke about it to one of his crew members, who responded with a matter-of-fact, “They’re not paying him enough to do that.” Despite doing what his sponsor wanted him to do, Bubba Bear Sauce has not been the primary sponsor for Lyons in a race since Martinsville. He put a bear head on for nothing.

And maybe all this has something to do with why the 2018 season is almost over and we’ve heard nothing about who will replace Lowe’s on Jimmie Johnson‘s car next season. Maybe whatever interested parties Johnson has talked to want the future Hall-of-Famer to do too many appearances for only a partial season of sponsorship.

I’m not saying that all sponsors are evil like Clyde Torkel. I appreciate any company that invests in the sport, and it should get perks in addition to its logo on the car. The problem is it costs too much for teams to operate, and plummeting ratings are scaring other sponsors away. This leaves the few sponsors that want to be in NASCAR with all of the bargaining power.

If the sponsorship and money model for the sport wasn’t broken, companies would be begging for a legend like Johnson to take their money, and ol’ Seven-Time would hold all the bargaining chips in the negotiations. That’s how it was when Richard Petty negotiated with STP.

But that’s not the NASCAR of today. Instead, we’re in the farcical NASCAR as seen in Stroker Ace.

At least in that world, we still get to hear The Charlie Daniels Band lay down one of the best theme songs ever recorded.

In the days of Stroker Ace nascar had not as of yet alienated its core fan base and heritage in search of fickle ‘markets’.