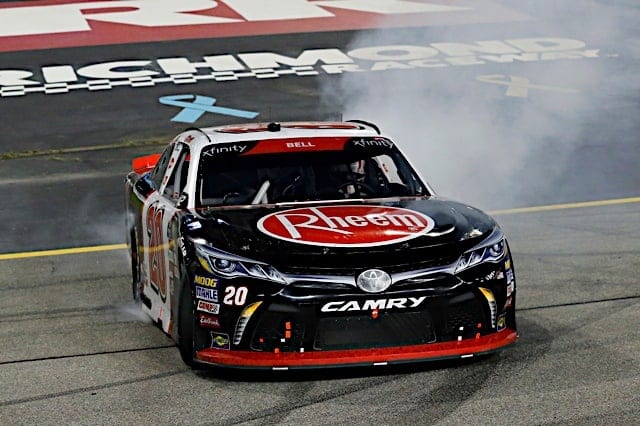 So where does Christopher Bell fit in with Toyota's plans? (Photo: Nigel Kinrade Photography)

Christopher Bell completed a sweep of Richmond Raceway in the 2018 NASCAR XFINITY Series by taking the lead on the final restart and winning the Go Bowling 250.

It was the sixth win of Bell’s NXS career and fifth of the season, tying the record for a rookie driver in the series.

Four drivers traded the lead back and forth for the vast majority of the night: Bell, Daniel Hemric, Justin Allgaier, and Dale Earnhardt Jr. Hemric was able to win stage one after the four spent the entire stage racing each other as close as you can be without wrecking. The pass for the lead happened on Allgaier as the two were battling lapped traffic.

Ryan Reed gave teammate Ty Majeski a tap entering Turn 3 and ended up spinning out the No. 60. Majeski couldn’t continue, but Reed was able to continue and finished 10th. With just a handful of laps remaining in the second stage, the stage ended under caution and Earnhardt won it. On the ensuing restart, Earnhardt led for four laps until the No. 15 of Katherine Legge spun out into the grass on the frontstretch, causing yet another caution. Earnhardt was able to speed off on the next restart, building a lead as large as 1.6 seconds on the No. 21 of Hemric.

But tire management was the key to long green flag runs, and Hemric was slowly starting to catch up with Earnhardt 50 laps into the run when Legge caused another caution after finding the turn two wall. All lead lapped cars pitted, but Earnhardt almost spun entering his pit stall and lost the lead to Matt Tifft on pit road.

Earnhardt also led the most laps on the night, but he struggled on pit road. On the pit stop before the last, he noted on the radio that he could have gained more spots but was too afraid about running through too many pit stalls.

Not one lap into the second to last restart of the race, there was an incident with major playoff implications. Austin Cindric tried to make it four wide, attempting to squeeze through Allgaier and Cole Custer on the high side and Reed on the bottom. Cindric drifted into Custer, who spun into Allgaier. Allgaier, who entered this race the points leader and riding a 13 race top-10 streak, finished 32nd and left Richmond third in points.

Bell passed Tifft on the last restart and held off Hemric and Ross Chastain for the win. It was a great comeback for Chastain, who had to start from the rear of the field due to the crew having to change the clutch and ended up finishing second. Hemric finished third.

Earnhardt wasn’t able to challenge for the lead again after being stuck on the outside and potentially ended his career in fourth. Earnhardt hinted to NBC following the race that he might race another race next year in this series. He later elaborated in the media center that he was working on another deal with Hellman’s to race one more time next year in return for them supporting the No. 7 of Allgaier. Elliott Sadler really did end his final race in his home state in fifth.

Entering the Charlotte Roval next week, the second race of the XFINITY Series playoffs, Bell is the only driver who has locked himself in. Custer and Brandon Jones are currently tied at the cut-off line for two weeks at Dover. Reed, Cindric, and Truex are currently on the bubble and will need to either win or improve their position these next two weeks to survive into the next round.