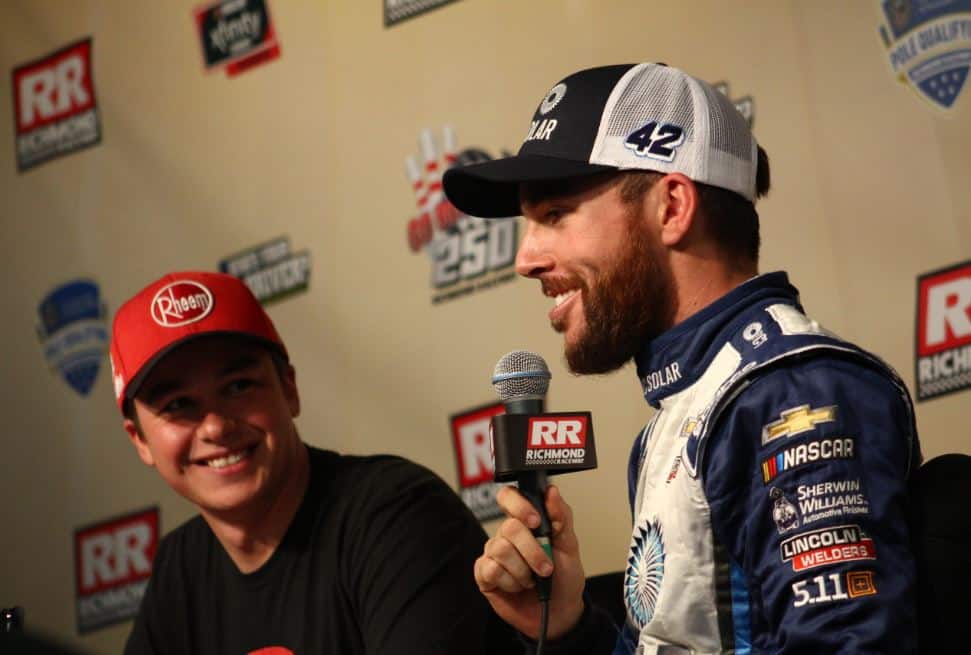 The opportunity of a lifetime has come to an end for Ross Chastain.

The driver of the No. 42 DC Solar Chevrolet for Chip Ganassi Racing brought his car home for a second-place finish in the GoBowling 250 at Richmond Raceway, his third and final scheduled event participating in that car this season.

Looking back on the races at Darlington, Las Vegas and Richmond, the now famed Watermelon farmer from Florida attempted to put his last month or so into perspective.

“It’s crazy, it really is,” Chastain said of the opportunity presented to him at CGR. “It doesn’t seem real to be sitting here. Initially disappointed in second (place) but as we walked over here (to the media center), it was all coming back to me. Man, what I’ve given and what I would give three months ago to have this opportunity. Two months ago, talks got real serious and it happened real quick and we announced it right away, and now knowing internally if I could do what I needed to do.”

Chastain, who will go back to running his usual No. 4 Chevrolet for JD Motorsports for the rest of the season next weekend at the Charlotte Motor Speedway ROVAL for the remainder of the season.

He collected finishes of 25th at Darlington (led 90 laps from the pole), a win at Las Vegas (led all but 20 laps) and a second-place Friday night at the Virginia short-track in his three races piloting the No. 42.

“It was said by one of the guys that was walking through everything at the beginning at CGR … he was like ‘if you go run 10th for the three races, we’re all gonna quit, we’re gonna go home because we don’t know what we’re doing in NASCAR.’ And it was true. If we didn’t perform, we probably didn’t have to be doing it. So to have these three races, have a shot to win all three, to grind like we did today … to start at the back and score stage points in stage one and then to come home second is really cool.”

Chastain started the 250-lap event at the rear due to an unapproved adjustment prior to the race, and was able to work his way into the top 10 by lap 75, scoring one stage point at the first break and six at the second before ultimately coming home as the runner-up.

He currently sits fourth on the XFINITY Series playoff grid, 18 points above the cutoff. With the ROVAL and Dover hosting the final two races of the Round of 12, Chastain is content with his decision and, frankly, career, regardless of what happens moving forward.

“Looking back I have no regrets,” Chastain said. “I could not have done anything different. Tonight that was all that I had … executing in all three races besides one huge crash was really cool.”

Its a sad commentary on NASCAR (and racing in general) that someone with the talent level of Ross Chastain will not get a good full time ride just because he doesn’t have a corporate connection or rich daddy to buy the seat for him.
I heard this mentioned before, and I think it is absolutely true, that Dale Earnhardt Sr. would never had gotten a chance to drive a cup car back in the 70s if the conditions were like they are now. He was just a poor southern mill town kid with lots of talent and little money.

What about Harry Gant? He got his shot at 39 with Burt Reynold’s team.