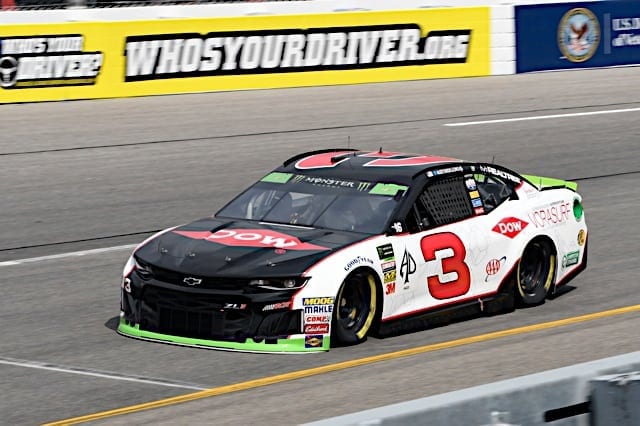 Austin Dillon‘s sixth-place run in Saturday’s Federated Auto Parts 400 from Richmond Raceway flew a bit under the radar, as the night’s headlines were dominated by Kyle Busch‘s victory and the lack of yellow flags.

But Dillon’s top-10 result, coming on the heels of his 11th at Las Vegas Motor Speedway last weekend, was a much-needed confidence boost heading into the final race of the first round of the playoffs.

“We did everything we could the last two weeks, I feel like,” Dillon said post-race. “We made a pit crew change and they balled out tonight. So proud of them. I was hard on them last week and they came to play today. Man, what an effort. I was bummed last night about our qualifying effort. I knew we had a car capable of racing good because of practice speeds, but it was a fun night.”

The result was the Welcome, N.C. native’s fifth top 10 of the season and first since Michigan a couple months ago. After finishing 17th in stage one and seventh in stage two, the No. 3 slowly and methodically worked its way up into contention for a top five, ultimately coming home in sixth.

“It’s what you want,” Dillon said of his evening. “It’s everything you can ask for from our team. We don’t have that many top 10s. To show up in the playoffs and show speed, compete with these guys, it’s huge. I’m pumped. I knew we could do it, but there’s been a lot of hard work and effort that’s gone into this. Everybody on the team deserves it. Proud of these guys.”

As for whether Chevrolet as a manufacturer has turned the corner?

“Well, the other manufacturer is in Victory Lane,” Dillon said. “So we still have a long way to go. we just gotta keep it up.”

He currently sits 10th on the Monster Energy NASCAR Cup Series playoff grid, 10 points above the cutoff heading into the third and final race of the Round of 16: the Charlotte Motor Speedway ROVAL.

“Nobody knows what to think there,” Dillon said of the impending inaugural race. “Obviously I don’t have the best finishes at road courses but we’re gonna do it. We’re gonna do our job and work hard, show a lot of heart in that race. To do what we’ve done the last two races, people didn’t think we had the capability of doing what we’re doing right now. Prove then wrong, fight hard and put ourselves in a good position.”