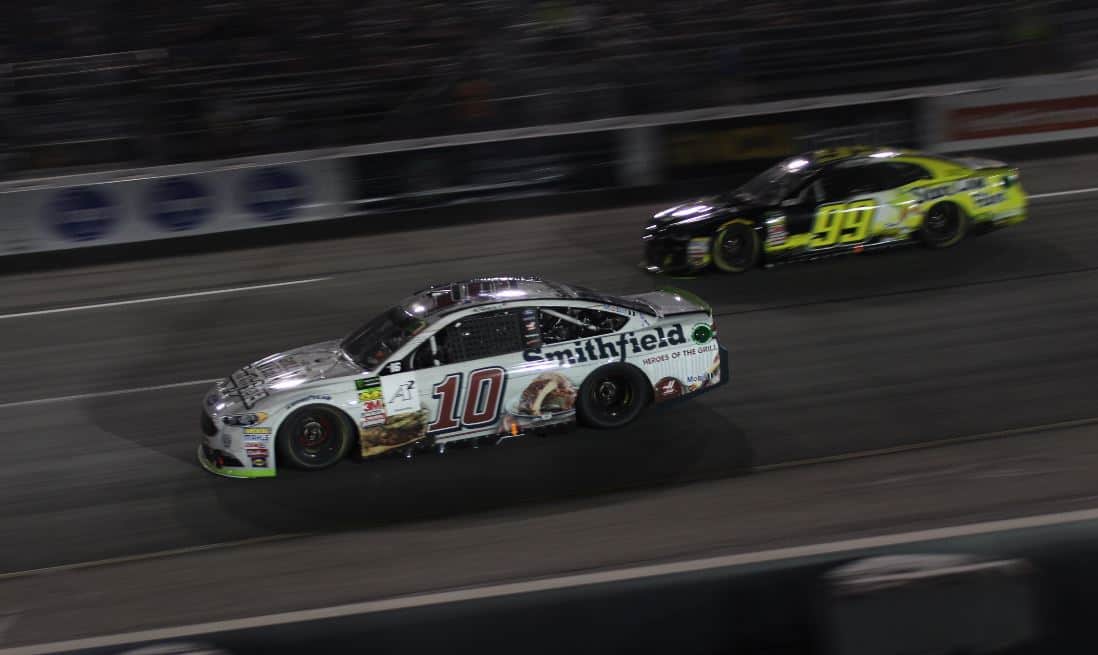 Richmond Raceway has always been one of Aric Almirola‘s better race tracks. In Saturday’s Federated Auto Parts 400, his performance set him up in prime position to advance to the Round of 12.

Almirola started the 400-lap race in sixth, his best starting position since the end of June at Chicagoland Speedway. During the opening stage, the No. 10 car remained around the back half of the top 10, ending the stage in sixth and earning five stage points.

The No. 10 car came alive during the second stage, as Almirola soared to third, picking up an additional eight stage points. As the long, green flag run continued, he passed Chase Elliott and Brad Keselowski and was closing in on his Stewart-Haas Racing teammate Kevin Harvick for second as the green and white checkered flag flew.

During the final stage, Almirola raced inside the top five throughout the entire 200 laps. Ultimately, he drove the No. 10 car up to third late in the going but got passed by Martin Truex Jr. and Elliott in the final few laps. At the checkered flag waved, he finished fifth, just his second top-five result of the season.

“We had a good night, a solid night,” Almirola said after the race. “We executed and ran well all night and that was the exact night we were looking for tonight to build a little bit of a points cushion going into the ROVAL next week where we’re all a little unsure of what we’re going to have.”

The fifth-place finish was Almirola’s second-career top five at Richmond, though finished he second in each of the stages in the spring race.

“I’ve ran really well here and really proud of all the guys on this team,” he said. “We’ve had really fast cars and I’m really proud of Johnny [Klausmeier, crew chief] and everyone on this team. We’ve come into the playoffs and we’ve executed and performed at a really high level and are having our best races to date.”

Almirola heads into the cutoff race at the ROVAL sixth on the championship grid, 23 points above SHR teammate Clint Bowyer, who is the first driver outside the top 12. Mission accomplished at Richmond for the No. 10 team, gaining eight points on the cut line.

Regardless, Almirola is still nervous heading into the ROVAL for the first time NASCAR has ever raced on its configuration at Charlotte Motor Speedway.

“There are so many questions going in there. We’ve had really good road course cars – we ran well at Sonoma and we thought we were going to run good at Watkins Glen and got taken out early,” Almirola explained. “Our road course stuff has been really strong. I really don’t know. I think everybody else is worried about it, too, besides Brad [Keselowski] and Kyle [Busch] at this point. There is so much we just don’t know.”