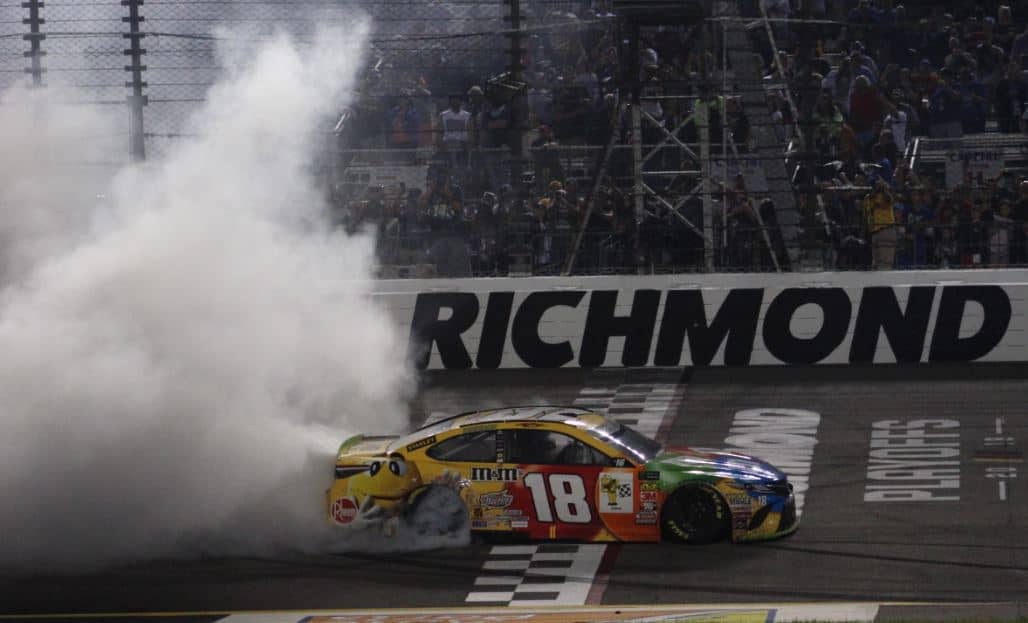 One day after fellow Joe Gibbs Racing driver Christopher Bell did the same in the NASCAR XFINITY Series, Kyle Busch completed a sweep of the Richmond Raceway in the Monster Energy NASCAR Cup Series in 2018 by winning the Federated Auto Parts 400.

But it was not an easy night for Busch, as he had to endure a slow start and a 70-lap dogfight between himself, Kevin Harvick and Brad Keselowski. Martin Truex Jr., who led a race-high 163 laps and won both stages before suffering a pit road penalty, wound up third.

Chase Elliott finished fourth, leading 34 laps, but didn’t regain the lead after green flag pit stops midway through the second stage, where he lost it to Brad Keselowski once the cycle ended. Aric Almirola spent the balance of the race around fourth or fifth and finished there, in fifth.

Austin Dillon grabbed sixth and Kyle Larson ended up seventh. Jimmie Johnson had a good night by finishing eighth, while Keselowski used up his tires while fighting with Busch and fell all the way to ninth by the time the checkered flag flew. A roller coaster of a night where he had to battle just to stay on the lead lap at the end of the second stage ended with Clint Bowyer in 10th.

Busch’s victory marked the 50th in his career, which ties him for 11th overall with NASCAR Hall of Famers Ned Jarrett and Junior Johnson. The 33-year-old’s win marks 193 national touring series wins in NASCAR, only seven away from Richard Petty’s record 200. Finally, Busch is now tied with Rusty Wallace for the most Cup wins at Richmond under the current 3/4-mile configuration.

After a lap 327 caution for a spin by Jeffrey Earnhardt in Turn 2, the ensuing lap 334 restart was the beginning of a battle between Busch and Keselowski, who swapped the lead twice over the next 30 laps while battling side-by-side for the majority of it. Busch was able to finally get around Keselowski for the final time on lap 364, then held firm and got through lapped traffic enough to where Harvick couldn’t close on him in the final laps.

Harvick finished second after running in the top three for the vast majority of the night. Harvick’s performance has given him a comfortable cushion entering the Charlotte ROVAL next week, as he only needs to gain seven points to clinch a spot in the next round of the playoffs.

Denny Hamlin finished 16th after avoiding certain disaster. Hamlin was almost spun out by Ricky Stenhouse Jr. on lap 51 but was able to save it. He locked up the tires though and had to join a number of slower drivers by pitting midway through the stage. By the end of the stage, Hamlin was the fastest car on the track and ended up walking away with two stage points.

Other playoff driver results included Erik Jones (11th), Alex Bowman (12th), Joey Logano (14th), Kurt Busch (18th), and Ryan Blaney (19th). Entering the wild card race at the Charlotte Roval next weekend, everybody outside of the top four in standings are within 25 points of the cut-off line. Hamlin (-29), Jones (-21), Johnson (-6), and Bowyer (-4) are all in the bottom four, while Blaney is just a point behind Bowman if any of those four win next week.

Not counting the stage breaks, there was just one caution on the night.

Didn’t want to be the leadoff man, but wow, this play off interest really has the comments rolling in. Must have been too hot for the night race, looking at the overhead shot of the crowd. Racing seemed better, but thank God for the mute button…….are they racing on the Roval next week…..I must of missed it.

Not in the demo Charles
Reply to  Capt Spaulding

There was a race…er motor sports entertainment event…. Saturday evening ?

If the talking heads had used Roval and chaos in the same sentence one more time I was going to smash the TV screen! The fake hype for next week has maxed out already.

Each year I am surprised at the lack of impact on traffic in my area , along a main thouroghfare not far from the track. On Friday night I dont think the police did anything. Either they are getting better, highly possible, or the “crowd” has gotten that much smaller.