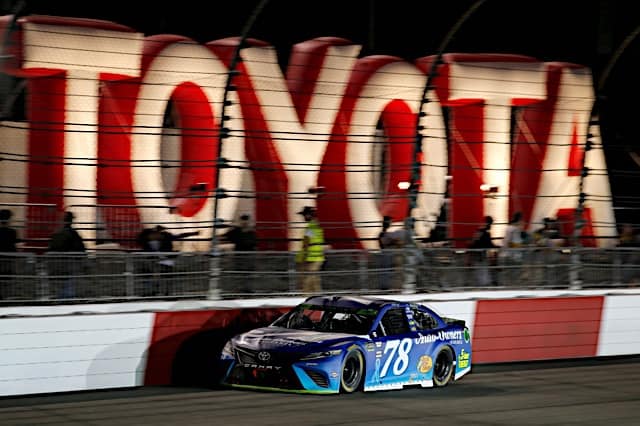 Martin Truex Jr. had the dominant in Saturday’s Federated Auto Parts 400 at Richmond Raceway, but he came up short yet again.

The No. 78 car took the green flag from third position, soaring to the lead early into stage one. After Truex passed Kevin Harvick for the lead, he cruised to the stage victory, earning a playoff point.

Stage two saw Truex out front some more, in fact, the entire 100 laps en route for another playoff point. But it was an uncontrolled tire by the No. 78 team that caused the No. 78 car to be sent to the rear.

“If you just start yelling and screaming at them they are just going to do worse the next stop,” Truex said after the race. “For me, I let Cole [Pearn, crew chief] and the guys in the pits handle it. I just do all I can to get back to the front because that’s all I can do.

“It was a good recovery. Their stops after that were all good. We had a new front changer and I thought he did a really good job. Outside of the penalty, it was the fastest we’ve been on pit road in a while. That’s really encouraging for the playoffs and going down the stretch where you need to win races of pit road.”

When Truex was sent to the rear, he began to methodically make his way through the field. The pit crew got another shot at it during green flag pit stops, where Pearn had Truex pit a few laps later than the front runners. Having newer tires later in the run helped the No. 78 car maneuver around cars that pitted earlier. A late-race caution allowed the team to get one more stab at it.

The team got Truex off pit road just inside the top 10. Over the final 67-lap green flag run to the checkers, he was able to drive up to third, tying his best career finish at Richmond.

Throughout the course of the night, Truex led 163 laps, making it four out of the last five races at Richmond that the No. 78 car has paced the field for more than 100 circuits. However, something seems to derail his shot at a victory each time.

“For whatever reason this racetrack does not want me to win at it,” Truex said. “We’ve done everything here but win, so it’s getting a little frustrating. But at the same time, mission accomplished, we’re moving on and hopefully we can save our good luck and good fortune for when we really need it.”

With the third-place finish, Truex is locked into the Round of 12. However, he believes Richmond owes him a victory, and he doesn’t get another crack at it until next April.

“If there’s one that does, it’s here, I can promise you that,” he said. “I just don’t know what we’ve got to do to win one of these things. It’s awfully frustrating to come here and be so good and lead so many laps and find every single race possible that things don’t work out for us. It’s pretty frustrating but at the same time it feels good to run that well.”

Through 28 races this season, Truex has four victories and 17 top-five finishes. He has no finished between position six and 10.