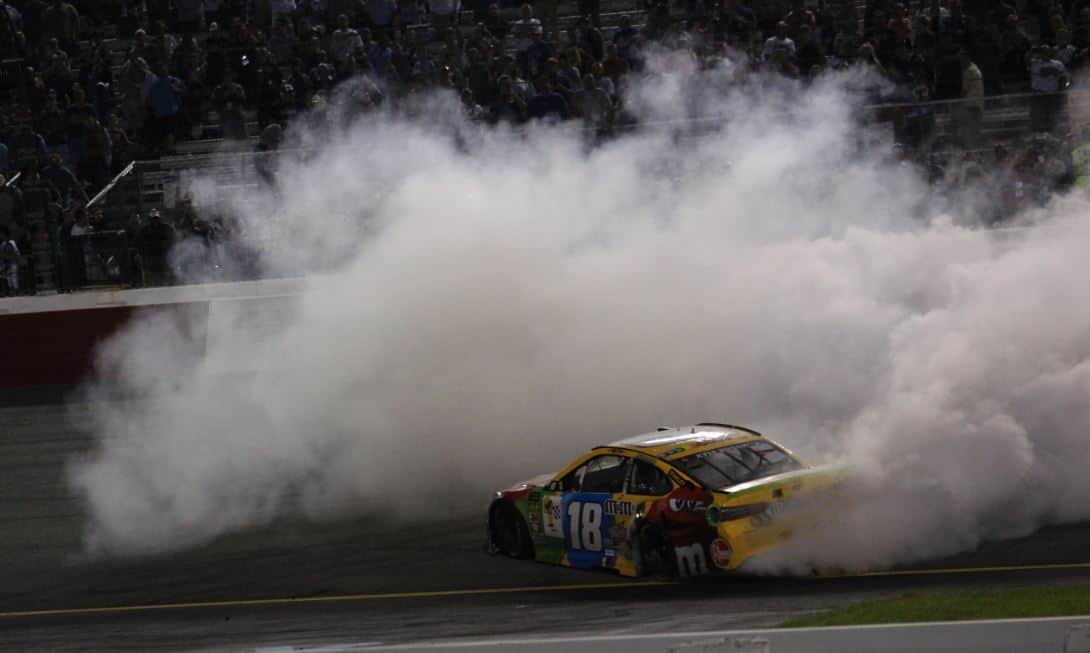 Earlier this week, I wrote about how playoff and stage bonuses make it difficult to topple NASCAR’s Big Three. But Richmond Raceway Saturday night (Sept. 22) reminded us of the most important reason; they’re simply just faster than everyone else.

Kyle Busch led the charge over Kevin Harvick and Martin Truex Jr. as the Big Three ran 1-2-3 for the first time this season. Just three cautions (two for stage breaks) allowed the cream to rise to the top as Richmond’s multi-groove short track favored long, green-flag runs. That meant the coast was clear for this trio, leading 295 of 400 laps on pure speed while Truex collected two additional playoff points by winning both stages.

Two of them also had to overcome adversity. Busch started dead last after scraping the wall in qualifying led to unapproved adjustments. Then, Truex had an uncontrolled tire penalty which sent him spiraling after the second stage. It snuffed out a dominating start for the No. 78 team; he led a race-high 163 laps, all in that first half.

But while Truex remains without a short track win, he fought hard to make it back to third. Meanwhile, Busch moved methodically through the field, peaking during the final run after Jeffrey Earnhardt had the lone spin of the night.  He then fought off a determined charge by Brad Keselowski to take control for good on lap 363.

Keselowski’s surge (three straight race wins) had taken the focus off the Big Three heading to Richmond. In the end, the No. 2 car may be best positioned to take the fourth spot at Homestead alongside this group. But this race showcased just how hard it’ll be to knock the trio off. All three have now clinched spots in the Round of 12, either on points or with a race win this round. Consider that’s with Truex enduring a slew of pit road problems, Busch spinning out in the Las Vegas grass and Harvick finishing 39th last week.

The Big Three, under the right circumstances, could have been vulnerable heading to NASCAR’s Great Unknown: the Charlotte ROVAL. The unpredictability of a new racetrack may make that race more of a wild card than Talladega later next month.

“I’m terrified of next week, to tell you the truth,” Harvick said. “There’s just so many unknowns.”

But the Big Three don’t have to worry about it. They’re already moving on, keeping their advantage and marching to Homestead. They’ll watch the others battle for scraps.

“Right now, it feels pretty good,” said Busch Saturday night. “We can go in there with no worries and try to go and attack that place and see what we can get out of there.” – Tom Bowles

After scoring the pole for Friday’s Go Bowling 250 at Richmond, Christopher Bell jumped to the top of pre-race favorites for the win. He needed to execute a perfect restart late in the race, but he got around Matt Tifft and cruised to the victory.

Bell led 67 laps on the evening en route to his fifth victory of the season, which ties a rookie record for most wins in a single season (Greg Biffle, 2001). The No. 20 team is locked into the second round of the playoffs, meaning it can go into the ROVAL with no pressure.

Richmond was Earnhardt’s first race back since retiring from full-time competition following the checkered flag at Homestead-Miami Speedway last season. The No. 88 was dominant on Friday, leading a race-high 96 laps, winning stage two, Earnhardt’s first stage win of any kind in NASCAR.

Until a late-race caution, it looked like Earnhardt was going to end the night in Victory Lane. A pair of bad restarts cost the No. 88 the win.

Heading into the ROVAL next weekend, Bell is locked into the next round, while Hemric and Justin Allgaier are more than 20 points above the cutoff. Chastain is 18 points ahead of ninth, with Elliott Sadler 16 up. Tifft is 12 markers above the cutoff line, while Tyler Reddick has an 11-point advantage, but it gets close from eighth to 12th.

Due to finishing better than Cole Custer on Friday, Brandon Jones holds the tiebreaker over the No. 00 team to advance into the next round. Ryan Truex, Austin Cindric and Ryan Reed are two, seven and eight points out, respectively. – Dustin Albino

Sunday was supposed to be a four-hour battle at Belgium’s tricky Circuit de Spa-Francorchamps for the European Le Mans Series.  Ultimately, cars were on-track for just over half of that time.

The start was moved up from 12:30 p.m. to 10:45 a.m. due to expected heavy rains.  G-Drive Racing’s Antonio Pizzitola started from the pole.  Duqueine Engineering’s Nicolas Jamin gave chase for the first four laps once the race went green (the first four laps were behind the Safety Car) before he was able to get past for the lead.

Jamin led until he pitted on Lap 21, just over an hour into the race.  That allowed United Autosports’ Filipe Albuquerque, who was on an alternate strategy, to take the lead.  Albuquerque was able to hold the advantage until the race was red-flagged just past the halfway point due to heavy rains and fog.  With 87 minutes remaining, the race was declared complete, giving Albuquerque and Phil Hanson the win.  It was a two-fer for United Autosports as John Falb and Scott Andrews (driving in place of Sean Rayhall) won in LMP3.  EbiMotors’ Fabio Babini, Bret Curtis and Riccardo Pera won in GTE.

The European Le Mans Series has similar rules regarding race stoppages to Formula 1.  Since the race was declared complete prior to three-quarters’ distance, half-points were awarded.  As a result, G-Drive Racing’s No. 26 for Pizzitola, Jean-Eric Vergne and Roman Rusinov clinched the LMP2 championship with one race still to run. – Phil Allaway

After coming up short in the Countdown last year, Steve Torrence is doing his best to not let it happen again, scoring his second consecutive victory in the second race of the championship Countdown at the AAA Insurance NHRA Midwest Nationals in St. Louis.

Torrence faced off against the Top Fuel finals against Clay Millican, running 3.770 seconds at 323.66 mph to best Millican’s 3.798 at 320.28 mph. This is Torrence’s seventh victory of the 2018 season and increases his lead in the points to 70 markers over Millican.

“This is going to be a really hard-fought war,” said Torrence. “I couldn’t have a better group of guys to be backing me up. I’m blessed and fortunate to be a part of that team right there and not drop the ball. I’m very confident going forward and this is all we could’ve asked for to start the Countdown.”

Robert Hight takes over the points lead in Funny Car on the strength of his victory in St. Louis. Hight ran 4.036 seconds at 276.29 mph to beat Tim Wilkerson, who ran 4.413 seconds at 201.91 mph, in the finals to take the win in spite of suffering an engine explosion at the finish line.

He also got by Dale Creasy, John Force and Tommy Johnson Jr. in earlier round competition.

Tanner Gray nabbed his sixth win of the season in Pro Stock, running 6.567 seconds at 211.06 mph in the final to defeat Drew Skillman’s 11.409 seconds at 78.68 mph. Gray also got by Chris McGaha, Erica Enders and Vincent Nobile and continues to lead the points in the class with his win.