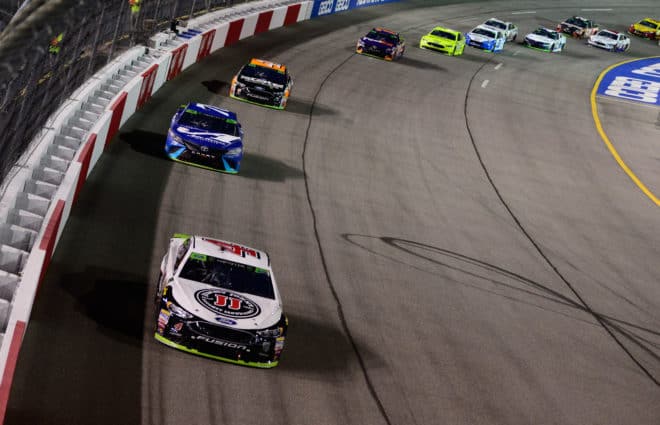 Couch Potato Tuesday: What Did Dale Earnhardt Jr.’s Return to Racing Do For NBCSN?

Richmond Raceway is quite different these days as compared to 15 years ago.  The cars don’t seem quite as fast as they once did there and passing is more difficult.  Races tend to have long green-flag runs.  But, that doesn’t mean you can’t have good racing.

Saturday night brought the Monster Energy NASCAR Cup Series back to Richmond for their second visit of the year.  Much like the first one, there were very few interruptions and Kyle Busch came from the rear to win to win.

Saturday night had three big stories that were covered throughout the night.  One was the playoffs (obviously).  This was a race in which the playoff contenders completely dominated.  For most of the race, everyone in the top 10 was a playoff driver.  At times, it was more than that.  Remember, Clint Bowyer slashed and clawed his way up to a 10th-place finish after qualifying 25th and still lost ground.

Another story is the ongoing unknown that is this weekend’s Bank of America ROVAL 400k at Charlotte Motor Speedway.  If you believe the coverage from NBC Sports, everyone’s having nightmares about the chaos that could happen.  Perhaps someone wet themselves last night just thinking about it.  In reality, it cannot be that silly.

What I can state as the truth are two things.  One is the fact that if NASCAR allowed Cup drivers to enter XFINITY playoff races, you’d have a much larger entry list for Saturday’s way too short 200-kilometer support race.  That’s just because no one has any time on the track in racing conditions.  The last major race on the ROVAL was the American Le Mans Series’ visit in 2000.  No one from that race is entered this weekend in either race, although a number of those drivers are still active in series such as the IMSA WeatherTech SportsCar Championship.

The other is that NBCSN replayed the various shenanigans from the ROVAL test entirely too much.  Seriously, is crash footage all that NBCSN had at the ready?  NASCAR live-streamed the test session.  That’s where most of that footage came from (but not all of it).  It’s not all going to be wrecking.  At least, I hope not.  For the record, that was more of an issue during post-race coverage than anything else.

Was there racing for position on Saturday night?  Sure, there was.  There seemed to be more of it later in the race, which is a tad bit unusual, but that’s mainly due to the long runs.

That said, your favorite driver had better have been in the playoffs.  If they weren’t in it, you basically didn’t see them.  It was actually rather depressing.  All you got were playoff drivers, even if nothing was going on around them.

A third story was tire wear.  Much like in the spring race, teams were forced to concoct strategies to maximize their track position knowing that there weren’t going to be all that many cautions.  In the first two stages, some drivers chose not to stop in those stages.  Martin Truex Jr. won them both by staying out.  Others pitted around the halfway point and had to charge to get back onto the lead lap by the end.

There’s nothing wrong with tire wear.  As long as nothing looney is going on, it’s perfectly fine.  However, it would help if viewers could see just what the heck you’re talking about.  We never got to see what a “decently worn” tire looked like all weekend.  Knowing that I’ve watched something like 850 Cup races by now, I could venture a guess.  Guessing isn’t good enough–not all fans have the same level of experience.  You’ve got the cameras and the manpower on-site in Richmond.  Make use of them.

Since the race ended a little ahead of schedule, there was plenty of time for post-race coverage.  That time was filled with a number of interviews (including the customary three with race winner Kyle Busch) and some post-race analysis.  The whole idea of three separate interviews with the race winner seems really redundant.  While winning will always be cool, it can get to be a bit much.  By the time Kyle Busch got to the Media Center Saturday night, he would have already done at least four interviews (three for TV, plus one for MRN Radio, not to mention whatever else happens prior to his press conference.  No wonder race winners can be a bit surly at times.

Overall, Saturday night’s race may not have been the most contact-filled, but it still had gripping moments.  Brad Keselowski ran himself out of tires trying to beat Kyle Busch.  For the most part, it was a competitive race.

Problem is, it might not have been all that compelling, especially early on.  Part of that is due to the choices of what to focus on.  The playoff focus doesn’t always help here.

Yep, a certain man who idolized Jimmy Means while growing up was back in the car for the first time since Homestead last year.  Naturally, he got a bunch of attention.  In addition to the Helmet Cam, Dale Earnhardt Jr. served as an In-Race Reporter and gave his thoughts about the race.  That decision by NBCSN put them right in the middle of the action since Earnhardt Jr. clearly came to play.

Since Earnhardt Jr. was in the race, NBCSN operated a man down on the evening.  They chose to go with a two-man booth of Rick Allen and Jeff Burton while Steve Letarte chimed in from the Peacock Pit Box.  The result was definitely a different feel to the broadcast.  The addition of Earnhardt Jr. to the booth has made it somewhat busy at times.  Going back to just the three commentators (albeit in two different places) puts things back to quasi-normal.  By no means was it calm, but it maintained a normal flow.

Friday night’s race will likely be remembered as being a duel for much of the race between Earnhardt Jr., Christopher Bell, Justin Allgaier (before he got wrecked) and Daniel Hemric.  It was a truly exciting race to watch at times.

Earnhardt Jr. learned a bunch during the race that he was able to use during Saturday night’s broadcast.  For instance, he spent much of the night at the very bottom of the track, skirting the yellow line.  That’s in contrast to recent Richmond races that have seen the groove move up multiple lanes.  There was apparently extra grip to be had there.

Also, it was clear to see that Earnhardt Jr. was having a ball out there.  That’s something we really hadn’t seen from him on-track over the last couple of years of his career.

That said, there are few race broadcasts that I can honestly recall that were so centered on the front of the field at a short track.  The racing for the lead started at the drop of the green.  Compared to the Cup race, I was much more enthralled.  No one got away immediately.

Compared to the Cup race, there was more coverage of on-track battles.  That doesn’t necessarily mean that the race was all that much rougher than Saturday night was.  The first two stages were just like Saturday night; all green until the stage breaks.

Post-race coverage was ok, but nothing really special.  Viewers got five post-race interviews and a check of the points prior to leaving the air.

I was concerned going into the race that the coverage was going to be completely up Earnhardt Jr.’s jock strap.  It can be hard to separate a colleague from your coverage.  Overall, that aspect wasn’t too bad.  You could tell that they wanted him to do well, but it never came out on-air.  If anything, the booth may have been surprised at how quickly Earnhardt Jr. got back in the driving groove.

Friday night’s race was a little more exciting to watch since it was more competitive.  That said, there was the headscratcher that was Ty Majeski’s crash.  That man has no luck.  Now he’s getting taken down by friendlies.

That’s all for this week.  Next weekend, shenanigans are nearly guaranteed to go down.  The Monster Energy NASCAR Cup and XFINITY Series will both be in action at Charlotte Motor Speedway’s ROVAL.  No one knows what could happen.  In addition, Formula 1 returns to Sochi in Russia.  TV Listings can be found here or in our television tab.

Phil Allaway has three primary roles at Frontstretch. He's the manager of the site's FREE e-mail newsletter that publishes Monday-Friday and occasionally on weekends. He keeps TV broadcasters honest with weekly editions of Couch Potato Tuesday and serves as the site's Sports Car racing editor. Outside of Frontstretch, Phil is the press officer for Lebanon Valley Speedway in West Lebanon, N.Y. He covers all the action on the high-banked dirt track from regular DIRTcar Modified racing to occasional visits from touring series such as Tony Stewart's Arctic Cat All Star Circuit of Champions.
Previous Who’s Hot & Who’s Not in NASCAR: Richmond, Take II
Next The Underdog House: Small Teams See Toughest NASCAR Race of 2018 at Richmond