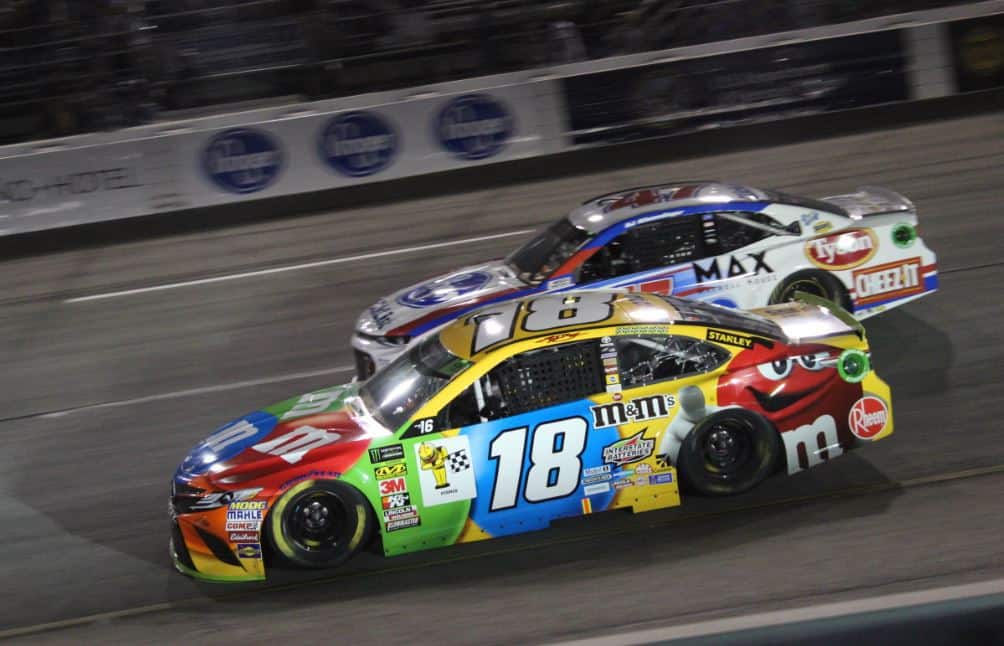 The impending doom in the form of the ROVAL made Saturday night’s race rather calm. The fact that the Big Three seemed to return was even worse news for those drivers hoping to go to the ROVAL with little to no concern. As it sits, three drivers are immune from Sunday’s race and the unknown. Brad Keselowski and Kyle Busch visited Victory Lane at Las Vegas Motor Speedway and Richmond Raceway, respectively, and much like last season, Martin Truex Jr. has enough points to lock himself into the Round of 12. For the remaining 13 drivers, their fate will be decided after 130 laps on Sunday.

Kyle Busch started at the rear of the field following unapproved adjustments and remained outside the top 10 for much of the race. But steady adjustments and solid pit stops by the No. 18 crew put him up front and ultimately got the No. 18 in Victory Lane for a Richmond sweep. Busch is now immune from the unknown called the ROVAL and is locked into the next round.

Another trophy for the case and a ticket to the next round of the #NASCARPlayoffs. No pressure for us this weekend, just sights on another ?! #18N18 pic.twitter.com/rHmkdKeLsN

Brad Keselowski came really close to earning his fourth straight victory Saturday night. Busch had to pass the No. 2 car to ultimately pick up the victory. As Keselowski noted below, had there been one more caution, the No. 2 car would’ve kept the No. 18 on the edge heading to Charlotte.

Gave it all we had going for 4 straight wins. Just needed 1 more caution at the end and I think we might of had.

The #2crew gave me a rocket on the short runs.

Entering the playoffs, it was a worrisome time for the No. 78 team. But Martin Truex Jr. has rebounded during the first two races of the playoffs to shut the naysayers up as he will race in the second round of the playoffs. A pair of third-place finishes at Las Vegas and Richmond allowed Truex to accumulate enough points to lock himself into the Round of 12 regardless of what happens at the ROVAL.

“I’ve always said I really enjoy the road courses,” said Truex, who will drive the blue No. 78 @AutoOwnersIns Toyota in Charlotte. “But what we’ve accomplished recently at the road races at @RaceSonoma and @WGI really can’t relate to the Roval." https://t.co/WWYQMOB5ir pic.twitter.com/zK7suQL4Nv

Kevin Harvick is all but assured he’s in the Round of 12 with a 57-point advantage over the cutoff line. He just needs a smooth, consistent day at the ROVAL on Sunday. That could be a concern, though, with the unknown looming ahead as a cutoff race. Could Harvick be one of the first of the Big Three to face elimination? Highly unlikely, but still a mathematical possibility.

What we want to do when we hear the word "Roval." ????#NASCARPlayoffs pic.twitter.com/oe0pWTjqTu

It was a strong race weekend for Chase Elliott and the No. 9 team but they aren’t locked into the next round, and they barely gained any ground. On a positive note, Elliott’s favorite baseball team the Atlanta Braves clinched the NL East Championship earlier this week.

Aric Almirola was written off by many critics and expected to be eliminated in the first round. But he had a solid night in Richmond which puts him in decent company as we head to Charlotte. The question remains about what could turn out to be the wildest race of the season next weekend.

Almirola will be gripping at all the points he can as will the other 13 drivers.

That feeling when you're #Almirolling. One more race in the Round of 16. Let's keep it going. ?#NASCARPlayoffs pic.twitter.com/5cKJ4CC4CH

An error by the pit crew and driver on Saturday night put Erik Jones behind the eight ball early. Jones showed he can do it as he rebounded to earn the 11th-place finish. That would be a great story if we were headed to Dover, but with the unknown of the ROVAL, that might not be enough.

Another season where Kurt Busch was super strong during the final few races of the regular season but didn’t have enough to really do anything during the playoffs. Busch was the second worst finishing playoff driver in 18th, which could be a concern heading to Charlotte.

.@KurtBusch's No. 41 @StateIndustries Ford Fusion was loose throughout much of the #Federated400 at @RichmondRaceway. Then, during a cycle of pit stops in the last stage of the race, an untimely caution traps #KB41 two laps down. He finishes 8th. https://t.co/u0JiQfxThH pic.twitter.com/OG96swidcw

Ryan Blaney finished the worst of the playoff drivers and that should come as a huge concern for the No. 12 team, as they are right on the line of being eliminated. In order to keep his championship hopes alive, Blaney may need to take risks that others can’t afford to.

We've got another episode of the #PenskeGames coming at you tomorrow! This time our drivers get artistic…or try to at least. ??

You all do remember what happened the last time we brought art into the games, right? ?

Austin Dillon has become the underdog of the playoffs in two of the last three appearances by the No. 3 car, and could realistically make the second round. Somehow, the No. 3 team has been able to pull out speed when it was needed and that has resulted in some great runs during the first two races of the playoffs.

It was a very successful weekend in Richmond. Each and every Chevrolet on the RCR roster flashed Top-10 speed. ?