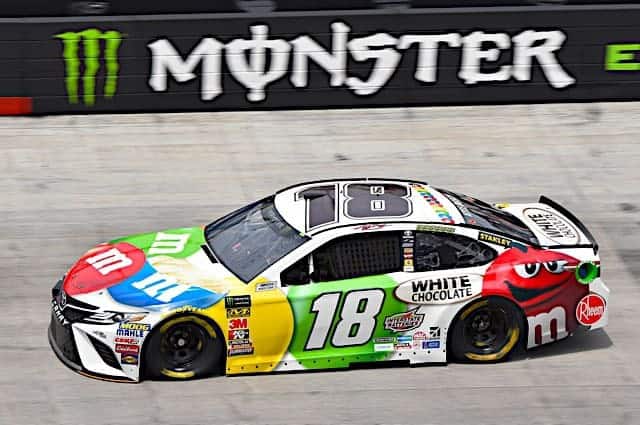 Did You Notice? … Kyle Busch has hit 50 career Monster Energy NASCAR Cup Series victories? That number ties him for 11th all-time at just 33 years of age.

So much has been made of Busch challenging Richard Petty’s record of 200 career wins when you compile his totals in all three major NASCAR series. He’s on pace to get there sometime in 2019 with 193 victories total (50 Cup, 92 in the XFINITY Series and 51 in Camping World Trucks). It’s a comparison that tends to agitate old-time fans.

But what’s lost in that is just how many Cup victories Busch could churn out over his career. If Busch races 10 more years, he could trail only Petty and David Pearson on the all-time win list. Earning 100 is a real possibility when you look at recent NASCAR history.

I looked at the careers of the 10 drivers ahead of Kyle Busch on the all-time win list. How many victories did they churn out during their age 33-42 seasons? For most, that was the prime of their careers. Consider Dale Earnhardt won five of his seven championships during that span of his life; Jimmie Johnson won four.

Eight of the ten drivers listed got at least 48 percent of their win total over that ten-year period. The average is 53.8 percent. They also averaged 47.2 wins apiece during that 10-year stretch of their careers.

So if Busch races another ten more years, competitively 47 wins gets him to 97. That number puts him third all-time, ahead of Gordon and Johnson. And you have to assume Busch will keep collecting a handful of XFINITY and Truck wins per season along the way.

As of now, Busch only has one MENCS title (2015). But you have to expect that number will grow, too. Busch is a top three title contender this season and his two main rivals are age 42 (Kevin Harvick) or losing their team at the end of the season (Martin Truex Jr.) For 2019, Truex could end up Busch’s teammate but that’s no guarantee of success. Since joining Joe Gibbs Racing in 2008, Busch is the only one from that team to win a championship.

Young guns like Chase Elliott, Ryan Blaney and others should develop over time to challenge Busch. But it’s hard to see them shutting him out of Victory Lane every year or slowing the inevitable rise up the list. Busch may be one of the sport’s most polarizing drivers but he’s well on the way to being one of its best. Ever.

Did You Notice? … AJ Allmendinger still had two years left on his contract with JTG Daugherty Racing? That’s how badly both sides wanted to part ways after a dismal last few years together. Allmendinger was officially released Tuesday from his MENCS ride but the divorce has been in the making for quite sometime now.

The ‘Dinger’s peak with the No. 47 team came all the way back at Watkins Glen in 2014, the site of his only career MENCS win. He made the postseason that year but never made it past the first round; after that, it was all downhill. The Californian earned just one more top-five finish on a road course in eight starts (fourth at Watkins Glen in 2016). He never finished higher than 19th in the final standings and was not even remotely close to making the playoffs again.

All this mediocrity came with one of the few teams in the sport that has kept expanding, both in total sponsorship and resources. Growth to a two-car team the past two seasons didn’t seem to boost performance; in fact, Allmendinger has averaged just one top five per year since the Glen victory. The total of four top fives is equal to the much-maligned Trevor Bayne during that stretch, also losing his ride at Roush Fenway Racing.

It’s a shame because Allmendinger is one of the sport’s most colorful personalities. His poor performances have faded him into the background of the sport but on-track success could have made him a national star. The potential for popularity was always there, paired with opportunities on some of the sport’s high-profile teams: Richard Petty Motorsports, Team Red Bull and Team Penske, to name a few. But a drug-induced suspension for ADHD medication lost Allmendinger the Penske ride in 2012, eventually opening the door for Joey Logano there. At the end of the day, he never quite reached his full potential in all those places.

Allmendinger’s NASCAR career, should it end here, will go down as one of missed opportunity. But the sport misses out when he’s not in the driver’s seat.

What is with the obsession with Kyle’s 200 TOTAL wins? It’s ridiculous and pointless to just about everyone except Kyle.

Need something to write about, ,,,,,,,,next week we beat the Roval results and cut off to death

Easy there fellow, you know the racing nothing to write about, so how many options do they have?

Since they can’t write about the racing. And really they can’t because an hour after its over its old news, what else is left?
A one race sponsorship for the Acme Racing Team by Clem’s Restaurant and Car Wash? Or the new driver whose daddy bought him the ride? Not exactly riveting stiff.

Its tough out there.

DoninAjax,
You must respect the talent of Kyle Busch. Back in the pre-Winston days, drivers had an opportunity to race 60-70 times a year in Cup. So 200 & 105 will never be attainable again. It’s a fun exercise to add Kyles win totals from the top three touring series and imagine stacking these wins against the prior era.

Matty, no it’s not a fun exercise it’s as pointless as trying to answer how many angels can fit on the head of a pin. Besides, why stop at those 3 series? Why not add the wins from the time he first started racing go-karts? Just about as relevant. Oooh, what a fun exercise.