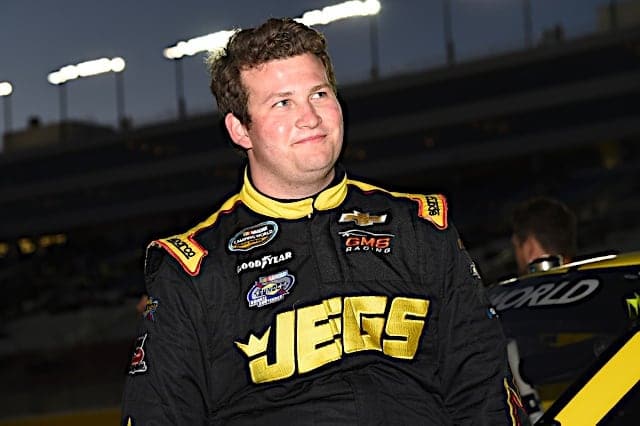 This week has been another busy one for GMS Racing. Despite the Camping World Truck Series being off until mid-October, when it will run the final race in the Round of 8 at Talladega Superspeedway, the organization has stolen most of the headlines.

Effective immediately, Cody Coughlin, who’s piloted the No. 2 Chevrolet for GMS throughout the 2018 season, will no longer be in a GMS truck.

“Due to unforeseen issues with additional sponsorship needed, Cody Coughlin will no longer drive the No. 2 Chevrolet for GMS Racing,” a statement from GMS Racing president Mike Beam read. “We are grateful for the relationship we made with Cody and the Coughlin family. We wish them the best in their future endeavors.

“Spencer (Gallagher) will fulfill the No. 2 GMS entry at Talladega, and we will announce who will be driving the remainder of the year at a later date.”

In a season that’s seen a marked improvement in Coughlin’s on-track performance after moving from ThorSport Racing to GMS Racing this year, the driver of the No. 2 Chevrolet never managed to find Victory Lane. However, he does have six top 10s, which is double the three he scored last season. However, he has finished outside the top 10 in eight straight races.

Coughlin leaves with a best 2018 finish of sixth at Dover International Speedway in May. His career-best result of third came at ISM Raceway in Phoenix last November.

“I have thoroughly enjoyed my time in NASCAR. I want to thank Maury Gallagher and Mike Beam for the opportunity to race with GMS Racing,” Coughlin said in a statement. “I wish them well for the rest of the season. I also want to thank my fans and extend the biggest thank you to my dad, mom and sister for all of their love and support.

“While I am sad to leave NASCAR for the time being, I am excited about the new opportunities I will be pursuing.”

Coughlin did make it sound like he has interest in returning to NASCAR at some point down the road, but that will likely hinge on finding a team to join and having the financial backing to race. It’s also unclear regarding what opportunities he plans to pursue next.

Fast forward to Tuesday, and the organization announced that ARCA Racing Series championship points leader Sheldon Creed will pilot the No. 28 Chevrolet for the final four races of the season, beginning with Martinsville Speedway. He will be paired with veteran crew chief Doug Randolph.

The number change comes because No. 28 has been an important part of Creed’s young career. It’s also the car number he’s currently piloting with two races remaining to close out this year’s ARCA championship.

“I’m super excited for this new opportunity at GMS Racing,” Creed said. “I know I have a lot to learn, so I’m going into this with an open mindset. I want to try to gain as much knowledge as I possibly can in these four races.”

Creed is no stranger to the Truck Series with three starts under his belt, though all of them have come at Eldora Speedway. Piloting a different truck each time, Creed’s career-best finish came earlier this season when he took the checkered flag in 15th. But as we all know, Eldora is a completely different animal than every other track on the series’ schedule.

“I’m excited to see what these final four races will hold for our No. 28 team,” Randolph said. “Sheldon (Creed) has proven himself on the race track in every level of racing he has been in. Stepping up to trucks for these final races will take some patience and learning for us all, but I’m sure he will get adjusted quickly and will be competitive.

“I’ve always enjoyed working with younger drivers, and I’m looking forward to getting started with Sheldon.”

Meanwhile, the No. 25 Chevrolet, that has hosted Timothy Peters for the last two races since the organization announced it had parted ways with Dalton Sargeant, will be piloted by K&N Pro Series East driver and NASCAR Next class member Tyler Dippel. He’ll step in and drive the truck for the final four races of the year, also beginning at Martinsville.

“I’m so grateful for this opportunity to race for GMS Racing,” Dippel said. “The Gallagher family, along with Mike Beam, have built a first-class operation, and I know they’ll bring great equipment to these races. I’m excited to be paired with such an experienced crew chief, Jerry Baxter, along with the entire No. 25 crew. They’ve been working together all season, which will definitely help accelerate my learning curve.

“I can’t say enough about my teammates — Johnny Sauter, a series veteran, will be there for me to lean on as needed, my Northeast Big Block Dirt Track colleague and lifetime friend Stewart Friesen and Justin Haley,” he continued. “Justin and I were teammates back in our early days of the NASCAR K&N Series. I am also looking forward to being on the same team as Sheldon Creed.

“This is the opportunity of a lifetime, and I hope to make the best of it.”

Though Dippel has 40 K&N Pro Series East starts and eight ARCA races under his belt, he’s run just one event in Trucks, which coincidentally also came at Eldora. He piloted the No. 17 Toyota for DGR-Crosley to a 13th-place finish.

In other news that’s not GMS Racing related, another driver will be leaving the Truck Series at the end of the year. Come 2019, Noah Gragson will walk away from Kyle Busch Motorsports to join JR Motorsports in the XFINITY Series. He will pilot the No. 1 Chevrolet vacated by the retiring Elliott Sadler.

“Noah’s proven himself quite a competitor over the last two seasons in the Truck Series,” said Kelley Earnhardt Miller, general manager of JR Motorsports. “He’s also impressed during a handful of races in the XFINITY Series and a lot of folks have taken notice. He brings the talent, energy and enthusiasm we’re looking for, and we’re glad to have him on board.

“With Noah’s addition, JRM has struck a healthy balance of youth and experience as we plan for the team’s future.”

In 42 career Truck Series starts, he has just two wins, 10 top fives, and 26 top-10 finishes, though he is currently second in the championship standings this season. Meanwhile, Gragson also has three XFINITY Series starts this year. He has two top fives and three top 10s to go along with an average finish of 4.3 in those races.

“Having the opportunity to drive for JRM and the No. 1 team next year is a dream come true,” Gragson said. “I’d like to personally thank Dale [Earnhardt] Jr., Kelley, Chevrolet and everyone at JRM for allowing me to compete for a championship in the NASCAR XFINITY Series. I’d also like to thank my sponsors, my management team and my family because none of this would be possible if it wasn’t for their support along the way.

“It will be an honor to follow in Elliott Sadler’s footsteps, and I’m thrilled to be joining such a successful race team. Elliott and Dale Jr. have done so much for the sport over the years, and I hope I can do my part to help take it to the next level. Overall, I’m excited, humbled and extremely appreciative for everyone helping this dream come to fruition.”

Silly Season is sure underway in the Truck Series, and we haven’t even begun to talk much about 2019 yet. It could turn out to be some of the biggest changes we’ve seen in recent history.