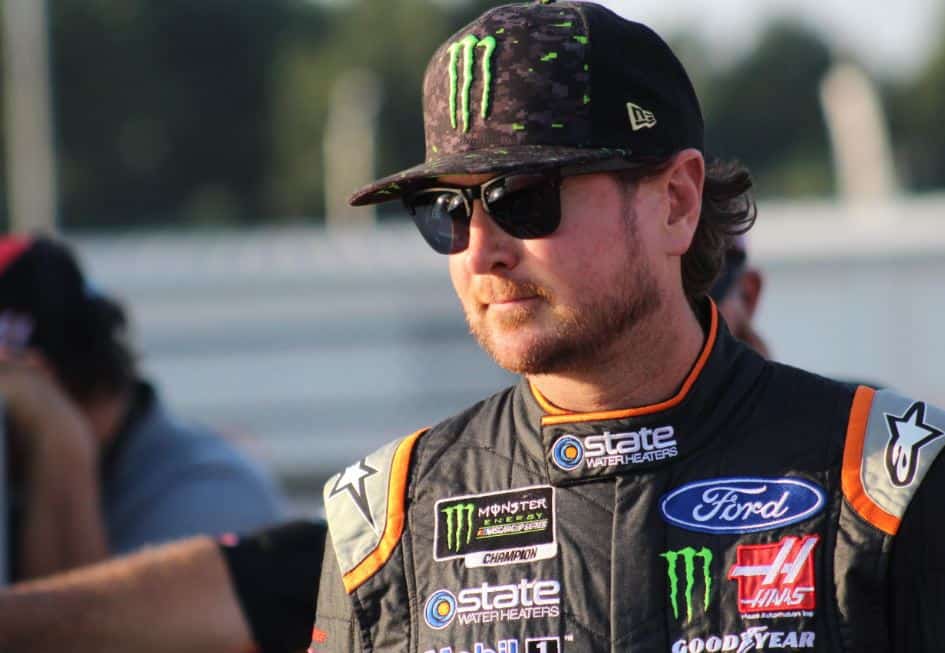 Stewart-Haas Racing’s Kurt Busch was able to put down a lap of 106.868 mph Friday afternoon.  That lap was just enough for the 2004 Cup champion to claim the pole for Sunday’s Bank of America ROVAL 400.

“To have this little [pole] trophy next to me means a lot,” Busch said afterwards.  “It brings me back to my past…when you go into a new event and you’re a rookie.  You have to execute with fundamentals and an open mind.  [The No. 41 team] approached this weekend by making sure all the bases were covered.”

Busch’s lap edged out JTG Daugherty Racing’s AJ Allmendinger by just four-hundredths of a second.  It appeared that an insufficient run out of the infield ended his chances at the pole.  During his press conference, Allmendinger stated that he left a half-second out on the track.

Jimmie Johnson will start sixth, followed by Clint Bowyer.  Jamie McMurray and Ryan Blaney will be eighth and ninth.  Chris Buescher in the second JTG Daugherty Racing Chevrolet spun the tires exiting the final chicane and tapped the wall.  He’ll start in 10th.

The first round of qualifying saw plenty of issues.  For Denny Hamlin, who already had his back up against the wall, it couldn’t have gone worse.  On his first lap at speed, he got into the bus stop chicane too fast and got loose.  He clipped the tire bundle exiting the complex, then spun and hit the outside wall.  The crash significantly damaged the FedEx Express Toyota, but did not bring out a caution.  Following the application of bare bond to the No. 11, Hamlin went back on track to try to set a time.  The best he could do was 27th quickest, slowest of the playoff contenders.  Depending on how bad the damage is, Hamlin may have to start at the rear of the field if a backup car is deemed necessary.

Barely a minute after Hamlin’s issues, teammate Erik Jones clipped the same tire bundle and damaged his Reser’s Toyota.  The No. 20 crew was able to make repairs and get Jones back out on track.  In the closing moments of the first round, Jones was able to time in 11th and get himself into the final round.  He’ll start 12th on Sunday.

The opening round was also tough on the playoff contenders.  Eight of them failed to advance.  In addition to Hamlin’s issues, Brad Keselowski dealt with power steering issues.  While he had the speed to compete, he couldn’t keep his car down in Turns 3 and 4 of the quad-oval.  That cost him serious time.  As a result, he’ll start 25th.

Of those who failed to make the final round, Martin Truex Jr. was the best of them in 13th.  Kyle Busch was right behind him in 14th, despite having a lap disallowed due to missing the final chicane.  Joey Logano will start 15th, while Kevin Harvick will start in 19th.  Aric Almirola will start 20th and Austin Dillon 24th.

With only 40 teams entered, no one failed qualify.  Regardless, there will still be teams repairing their cars prior to Saturday.

Monster Energy NASCAR Cup Series teams will be back on-track bright and early Saturday morning for practice No. 2 at 11 a.m.  That session can be seen on NBCSports.com and the NBC Sports App.

Let’s get Annette as honourary starter.