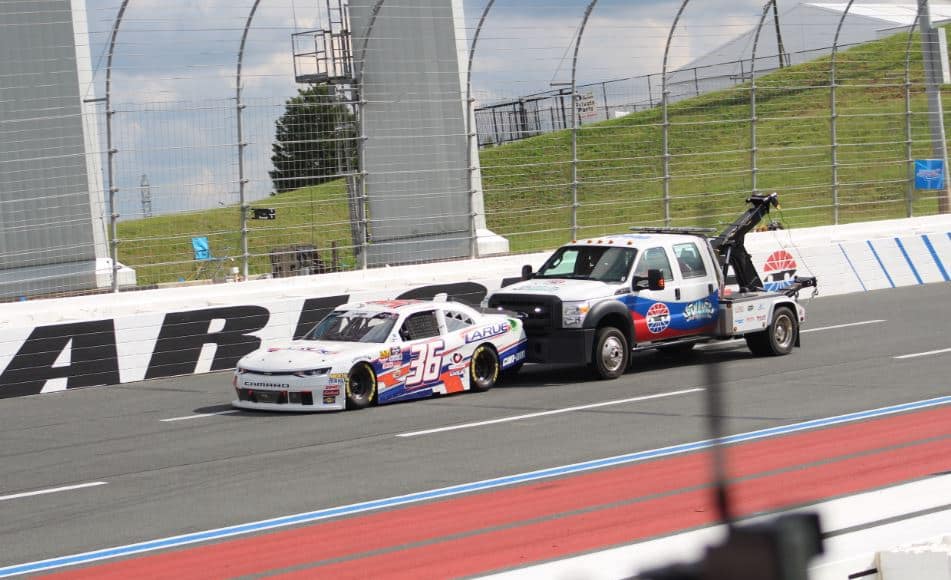 After jumping to second quickest on the boards during qualifying for the ROVAL XFINITY Series race, road course pro Alex Labbe was confirmed as a driver to watch at the inaugural Drive for the Cure 200 from Charlotte Motor Speedway.

With his years of Pinty’s Series success in Canada, the rookie for DGM Racing clocked in at fifth fastest, surpassing his best-ever series start of 13th and giving him an edge for the unknown that awaited the other 39 drivers.

That was until the axle popped out of his No. 36 Chevrolet, bringing him to a dead stop on the track to bring out the day’s first caution.

“I felt a little vibration. I think we had a loose wheel at the same time,” Labbe said. “When I got back on the gas, it just went to neutral and the axle popped out.”

Needing a push back to pit road, Labbe lost a lap and struggled to get it back for most of the afternoon. The day of promise came to an end due to the difficulty of passing on the 2.280-mile track.

“It’s a shame because we had really good speed today,” he said. “We couldn’t get that lucky dog. Every time the stage would end, a guy would just get a lap down so we couldn’t get it. We didn’t get it until late in the third stage.

“We could have gotten a top 10 that we deserved today.”

Entering the ROVAL with experience, the Canadian knew Saturday was perhaps his final opportunity to run up front in 2018. And following the speed from practice to qualifying, a 13th-place result at the end doesn’t heal the wound.

“The whole weekend was awesome,” he said. “Every practice session we were top 10, qualified fifth, second in the first round. We had good speed in the car and I was really looking forward to race. But it’s racing. Every time we seem to have a decent run we always have bad luck.”

With everyone racing the track for the first time, Labbe knew his small No. 36 team were on even footing with even the top teams.

“It’s a tough track, no margin for error,” he said. “But it’s not motor-dependant or aero-dependent and everyone is on the same stake. That helped a lot. That’s what makes it a little more driver-dependent. You cant just overdrive the car, you have to use your head.”

Labbe leaves the ROVAL 16th in driver points with five races left in 2018.