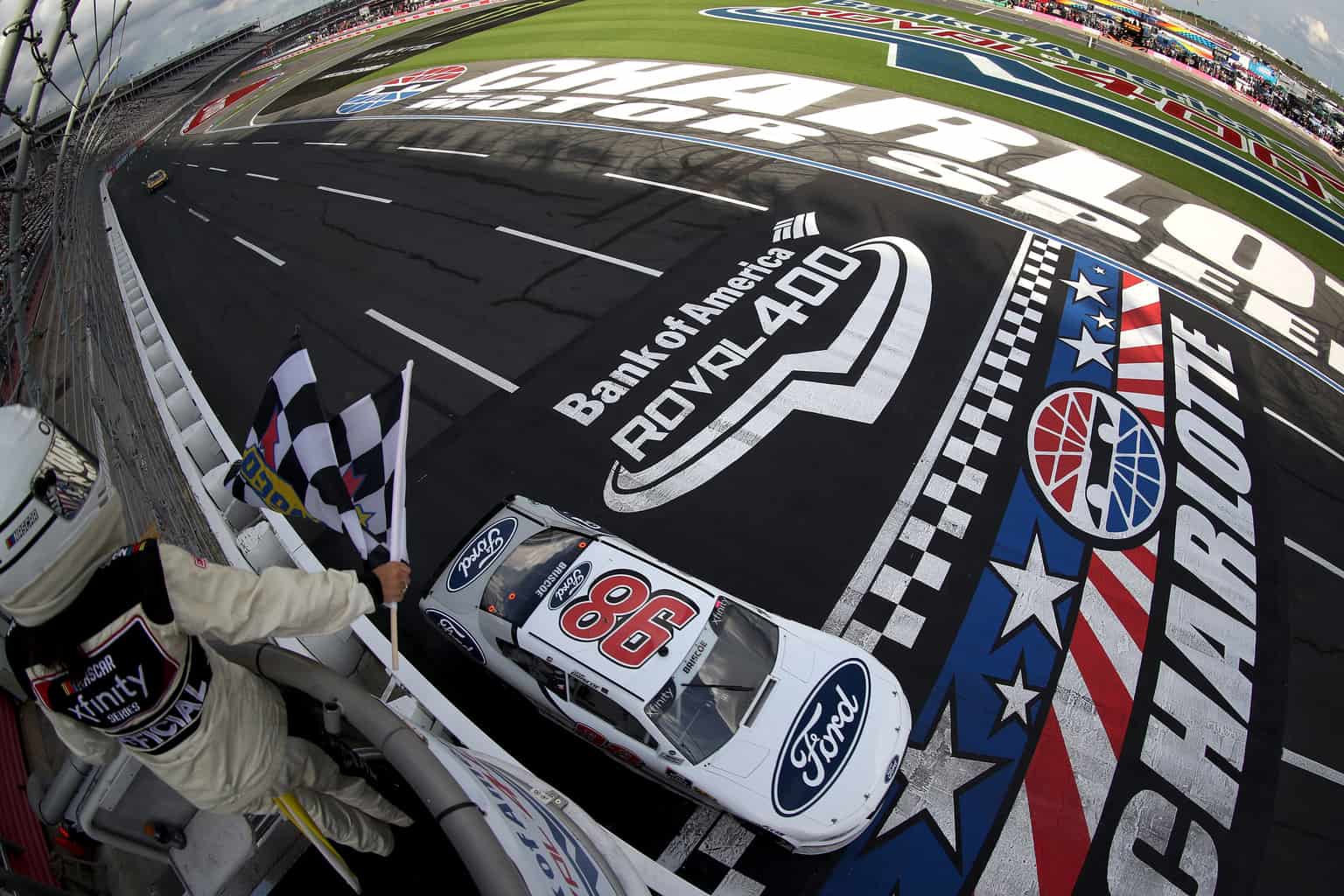 The playoff drivers may be the focus of a lot of talk this time of year, but Saturday at Charlotte Motor Speedway, Chase Briscoe reminded everyone that he was in it to win it. And win he did, for his first career XFINITY trophy. Briscoe’s win makes him the first driver to win on Charlotte’s infield road course, a race that was added to the XFINITY schedule this year. It’s the second victory for the No. 98 Biagi-DenBeste racing Ford in 2018 (Kevin Harvick also won in Atlanta).

Teams got their first track time on the road configuration on Thursday, and the road course provided plenty to challenge drivers from the start.

Cindric led the field to the green flag.  Drivers dove into Turn 1 double file for the first time and somehow made it through despite some slipping and sliding.

After qualifying second, Alex Labbe lost an axle on the second lap, bringing out the first caution of the day when he rolled to a stop on the racing surface.

That incident was the only time the yellow would fly in stage one as NASCAR made good use of the local caution for spins by Ty Majeski and Cindric.  Cindric’s lap 12 spinout cost him the lead, and even though he recovered in the fourth position, he was never able to get back to the front.

Briscoe snatched the lead from Hemric to kick off stage two, which featured a bit more mayhem than the first.

Katherine Legge and Gaughan spun but were able to continue without cautions.  The most notable incident came when Justin Allgaier got caught in a chain reaction and collected Ryan Sieg.  Allgaier, the regular season point leader, struggled in Charlotte.  An unscheduled late stop relegated him to 25th with 15 laps to go, though he rebounded to 15th, it has playoff implications.

Christopher Bell got around Briscoe as Briscoe and others elected to pit with four laps remaining. just before the stage ended to win over Custer, Reddick, Preece and Elliott Sadler. Andy Lally, Grala, Spencer Gallagher, Briscoe and Lawson Aschenbach also got stage points in the top 10.

Briscoe regained the lead under caution as he was able to stay on track at the conclusion of the stage.

The start of the final stage featured a demonstration of how treacherous the “concrete canyon” as it’s called between Turns 1 and 2 can be. There’s nowhere for a car in trouble to go, and when Ryan Truex brushed the wall, the chain reaction pileup collected Majeski and Michael Annett.  The accident puts Truex in trouble in the playoff picture.  He finished the race, but in 16th, and only Brandon Jones had a worse finish among playoff drivers.

The rest of the of the stage was clean, with Briscoe holding point, but a crash by Sieg left the backstretch littered with debris from the No. 39.  Bell hit Sieg’s bumper brace, which ricocheted off the outside wall and a couple other cars as well.

Cleanup from Sieg’s wreck was extensive and the caution was the longest of the race at four laps. When the race restarted with 10 to go, Briscoe had to hold off the charging Hemric, but Hemric overdrove the frontstretch chicane and had to serve a stop-and-go penalty. That left Marks to challenge, but Briscoe was able to open up his lead in the closing laps and take the checkers for his first career XFINITY Series win.

Bell leaves Charlotte with a 33-point advantage over Hemric. Reddick is third, nine behind Hemric. Custer and Tifft round out the top five in points. Sadler, Allgaier, Ross Chastain, Cindric and Truex currently hold down the top 10 spots, with Ryan Reed and Brandon Jones in 11th and 12th. Allgaier and Chastain hold a two-point advantage over Cindric for eighth place and 15 points over Truex as the series heads to its first elimination after Dover next week.

“Honestly, I can’t believe it, said Briscoe after the race. “We were so far off in practice.  The car was great.  The driver was not.  I watched a lot of video, a lot of on board stuff trying to get better overnight.  It seemed like everyday we came back we’d pick up a second and I knew when we got in the race and I got around guys I could see more of what they were doing and where they were beating me.  That was really the biggest key there is just getting around other cars and seeing what they were doing different…I wasn’t very good at the beginning.  I probably wasn’t aggressive enough maintaining track position and I can’t believe I didn’t run off the track, ever.   That’s surprising.  Normally on a road course I’m way off running 10th on back and this is the one place that I felt drove like a dirt track instead of a road course.  I don’t feel like I drove a perfect race, but these guys gave me a perfect race car.  That’s what it’s all about.”