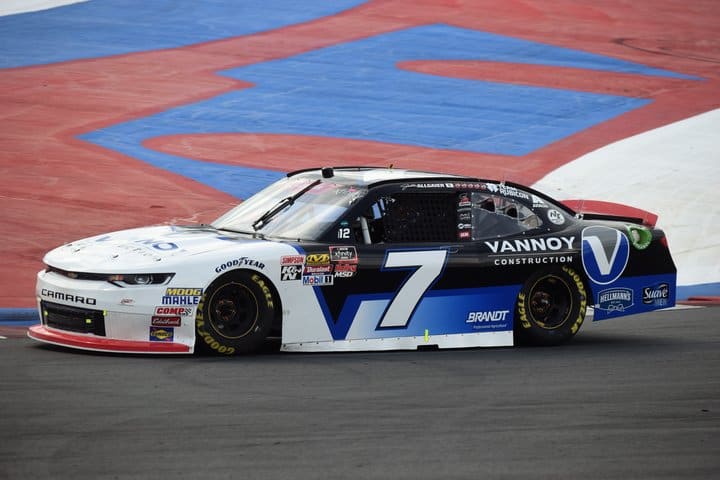 For JR Motorsports’ Justin Allgaier, Saturday’s Drive for the Cure 200 was supposed to be a key race for him to pick up points on the field after his crash at Richmond.  After all, Allgaier came into the race having won previous road races at Mid-Ohio and Road America back in August.  The race started out well, but trouble struck at the midpoint of the event.

On Lap 27, Allgaier chose to pit for what was going to be his only stop of the day prior to the conclusion of stage two.  The stop itself went just fine.  It was the pit exit that did him in.  Allgaier exited the pits into a small crowd of cars.  Austin Cindric was charging up from behind and had to avoid the slow car of Joey Gase.  Cindric moved to the left to avoid Gase and ran into Allgaier in Turn 3, spinning out the Vannoy Construction Chevrolet.

To make manners worse, Allgaier was struck by the car of Ryan Sieg.  The damage was not that significant to Allgaier’s car, but Sieg dropped three laps down getting repairs.  Sieg would later retire from the race after shedding parts on the backstretch to bring out the final yellow.

After the crash, Allgaier’s car was not all that badly hurt.  Pitting under the caution caused by Sieg’s debris dropped Allgaier out of the top 10.  Despite fresher tires than nearly everyone else around him, Allgaier faded in the final laps of the race, dropping spots over the last couple of laps to finish 15th, ninth of the playoff contenders.

Immediately after the crash, Allgaier was very upset with Cindric.  The final stage allowed him to calm down a little bit.  Allgaier and Cindric did talk to each other after the race.  Cindric stated in his press conference that Allgaier was unhappy, but “didn’t want to fight or anything.”  Allgaier simply told Cindric that the incident came about due to poor driving and that he could have done better.  For his part, Cindric took the blame for the incident.

The 15th-place finish eradicated nearly all of his regular season points cushion.  Allgaier entered the race third in points with a 21-point cushion over ninth.  He’s now in a tie for sixth with teammate Elliott Sadler (Sadler wins the tiebreaker by virtue of having the better finish in the round).  The cushion over ninth is down to just 11 points going into Dover.