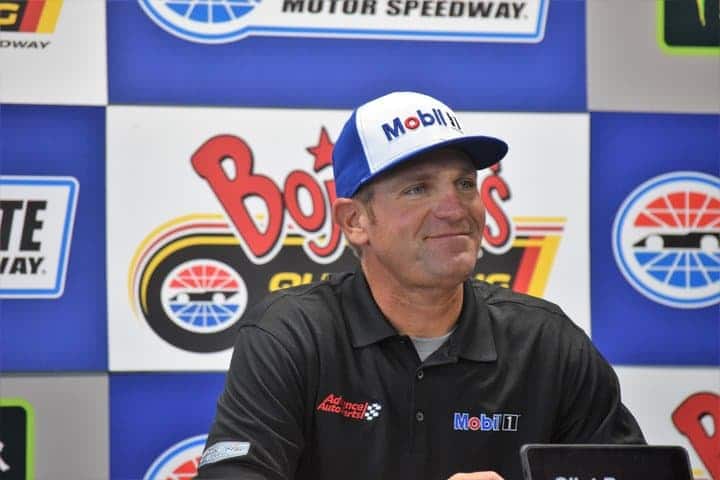 Stewart-Haas Racing’s Clint Bowyer entered Sunday’s Bank of America ROVAL 400 13th in points, four markers behind Ryan Blaney for the final spot in the Round of 12.  Essentially, the plan for Sunday was to keep himself out of trouble and beat everyone around him in the standings.

For much of the race, Bowyer was sweating bullets.  He was right on the pace of Hendrick Motorsports’ Alex Bowman and within a couple of points of being eliminated.  With 20 laps to go, Bowman pitted in order to get fresh tires.  Bowyer followed him in for rubber and dropped out of the top 20.  The fresh tires gave both drivers not only a tire advantage over the rest of the field but also a fuel advantage.  They could run all out to the checkers.

The caution for Ricky Stenhouse Jr.‘s crash brought everyone back together.  A number of drivers pitted to make sure that they were good to the finish, moving Bowyer up.  Then, avoiding the Big One in heartburn turn on the restart moved him into an excellent position.

Contact on the final lap between Martin Truex Jr. and Jimmie Johnson not only moved Bowyer up to a third-place finish, but also eliminated an immediate points rival from the playoffs.  Once the smoke cleared, Bowyer was into the Round of 12 in ninth with seven points to spare.

“God almighty, you knew that [the race] was going to be something, and I think it was a little bit of everything,” Bowyer said during his post-race press conference.  “We had some long‑run action there, had some good racing, wild restarts.  You know when those cautions start coming out at the end it’s such a wild racetrack first and foremost at Turn 1.  Just the whole track is sketchy.  The whole time you’re out there you’re fighting for lateral grip, you’re fighting for forward drive, you’re fighting for the turn.  It’s like, gosh, just one problem.

“We did a good job of bringing a fast race car, did a good job of qualifying well.  That put us in a position to get those stage points and get ourselves at least on the dance floor that first stage.  But then you get behind.  Then you’re behind a little bit, and by the time I got back up through them I had both fenders knocked in and hit a damn turtle once.  I knew as long as I kept [Bowman] at arm’s reach, I thought I could be all right, but then as we started catching those lappers, if he gets to them before I do, things like that, it could be tricky.  But nonetheless, I don’t know what all happened.

“Then at the end, it’s mass chaos.  I don’t know if [the last-lap wreck] knocked Jimmie [Johnson] out or not, but I bet he’s super bummed if it did.”

Sure enough, Johnson was in fact eliminated due to a three-way tiebreaker as a result of the chicane crash.  For Bowyer, he wouldn’t have had to worry about it anyway.  Even finishing fifth would have still locked him into the Round of 12.  The third-place finish resulted in him finishing the Round of 16 in ninth.   By virtue of his two wins and multiple stage victories from earlier in the season, he will start the Round of 12 in fifth, seven points ahead of ninth-place Chase Elliott.

Despite the great finish, Bowyer was pretty much worn out by the end.  He noted that he had gotten up at 5 a.m. Sunday morning and watched the sun come up while thinking about the chicanes and the crucial Turn 8 that brings you back onto the quad-oval.  He finished his press conference by stating his desire for a cold beer.  After Sunday’s performance, it’s well-deserved.

Did he say anything after the race about the on-track dust up with Ryan Newman ?