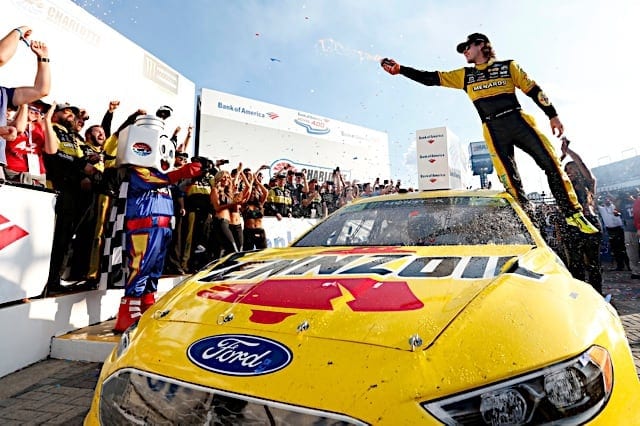 The Bank of America ROVAL 400 had so much action, it’s impossible to put in a single paragraph. The leader of the race overdrove it on a restart and sent half-a-dozen cars straight into the outside wall. Moments later, a seven-time champion was one corner from snapping a 51-race winless streak and advancing in the Monster Energy NASCAR Cup Series playoffs. But then he took the sport’s defending champion out in a spectacular wreck. Yet another playoff contender had to ride the wall, video game style with a broken suspension and somehow hobbled his car across the line to earn a transfer spot. The margin? Just a few feet.

That’s just the tip of the iceberg for a Charlotte road course that brought excitement, unpredictability, driver skill and pit strategy all wrapped into one. Ryan Blaney won the race, a beneficiary once Jimmie Johnson and Martin Truex Jr. wrecked coming out of the frontstretch chicane. But the real winners were NASCAR fans who have slept through many an oval race here over the past decade.

“Did you like it?” Blaney said over the loudspeaker to the fans after winning. They responded by giving him a standing ovation. How could they not? The entire field seemed to cycle up and down like a yo-yo. The restarts, double file into a tight Turn 1 were always captivating. Brad Keselowski was the perfect example: he spun and fell back to 37th. Then, with the right strategy and speed he was leading … only to plow right into the barrier on a subsequent restart. Just like that, three of the top-five cars plowed in with him, changing the complexion of the race in an instant.

There were moments like that. All. Day. Long. When was the last time a NASCAR race without a restrictor plate produced such drama?

“Everybody dubbed this the wild card race, and I guess I’m lucky that I survived it,” said third-place finisher Clint Bowyer. “But I’m happy for our sport that it lived up to the expectation, up to the hype.”

ALLAWAY: BOWYER BOUNCES BACK IN WILD RACE TO WIND UP THIRD

There were 10 lead changes in 109 laps Sunday (Sept. 30). That’s one more than this year’s 400-lap, Coca-Cola 600 on the 1.5-mile oval won by Kyle Busch. It’s not a question of if the ROVAL returns going forward but whether other tracks will copy Charlotte’s lead.

Johnson’s last-lap mistake also shook up the playoff field. It breathed second life to Kyle Larson, whose junked race car somehow limped to the finish and earned the final spot in round two. Larson joined Aric Almirola and Johnson in a three-way tie for 11th, his car riding the outside wall that final lap.

It’s a star-studded group who failed to advance, as Johnson joined Denny Hamlin, Daytona 500 winner Austin Dillon and Erik Jones on the outside looking in. Joe Gibbs Racing in particular winds up disappointed as only one of its four cars made the final 12 this year.

A few feet for Johnson could have made all the difference. The same goes for Truex, so angered with his rival the No. 78 spun Johnson out once both cars got going. It’s frayed tempers and drama that should continue well into the Monster Mile at Dover next weekend.

Suddenly, the 2018 NASCAR playoffs have life. They can thank the Charlotte ROVAL for that. – Tom Bowles

CATANZARETI: LARSON HAS LUCK ON HIS SIDE IN ADVANCING THROUGH TO NEXT ROUND

Heading into Saturday’s Drive for the Cure 200 at Charlotte Motor Speedway, Chase Briscoe had what he considered a bad year while racing a partial schedule between Stewart-Haas and Roush Fenway Racing. He dominated the ROVAL.

The ROVAL was Briscoe’s fourth start in Biagi-Denbeste’s No. 98 Ford this season. In the previous three races, he had a best outing of 11th, ironically enough at the Charlotte oval on Memorial Day weekend. Meanwhile, Briscoe put his IMSA skills to use, leading 33 of 55 laps en route to the victory.

2018 has been a year of adjustment for Briscoe, though Ford Performance has backed him every step of the way. After Brad Keselowski Racing shut its doors following the Camping World Truck Series season finale last year, which Briscoe won, he was left without a ride. Ford put him in the No. 60 to split time with Austin Cindric and Ty Majeski. That’s been, well, a disaster.

Once Briscoe took the checkered flag on Saturday, his crew radioed into the rookie driver telling him ‘we need to get you more opportunities because you damn sure deserve them.’ Indeed. Briscoe is one of the best young prospects in NASCAR, and given the right circumstance could elevate an entire organization.

Heading into the opening round cutoff race at Dover, Christopher Bell is locked into the Round of 8 by winning at Richmond. Daniel Hemric is also looking solid, 30 points above the bubble. Tyler Reddick is +21, Cole Custer +14, Matt Tifft+13, Elliott Sadler +11, Justin Allgaier +11, Ross Chastain +9. Austin Cindric is the first driver on the outside, nine markers back. Ryan Truex is 10th at -24, Ryan Reed -25 and Brandon Jones -28. Truex, Reed and Jones will likely have to win in order to advance to the next round. – Dustin Albino

CATANZARETI: LABBE BATTLES BACK TO 13TH AFTER EARLY SETBACK ON ROVAL

With the F1 Championship all but decided, Lewis Hamilton pulled 50 points clear of Sebastian Vettel with five races to go. The attention of the weekend goes to Mercedes and team orders. Valtteri Bottas won the pole and was the fastest on the track all through the first 2/3 of the race.

But with Max Verstappen’s long first stint slowing the leaders down, Bottas was told to allow Hamilton past to make sure Vettel does not get past Lewis and gain points in the Championship.

Was the move too cautious? With a 40 point gap over Vettel and a much faster car, Hamilton didn’t seem to be in danger from the Ferrari in Russia. Yes Hamilton had blistered tires, but it was clear Ferrari did not have the pace to overtake Lewis.

Anything can happen in a race including reliability and Ferrari maybe turning their engines up. However, with this much of an advantage in the points, let the drivers race. Bottas earned pole, kept the lead and he deserved to cruise to an easy first win of 2018. Instead, we leave the 2018 Russian Grand Prix with a 2002 Austria and 2010 German GP taste in our mouths. – Drew Mongiello

Blancpain GT Series Sprint Cup champ Raffaele Marciello entered the race tied with Black Falcon’s Yelmer Buurman, Maro Engel and Luca Stolz.  Quite simply, whoever finished in front of the other would win the title.  On Sunday, Black Falcon’s No. 4 Mercedes-AMG GT3 was unbeatable.  Despite a couple of Safety Car periods in the final that allowed Marciello’s teammate Tristan Vautier to close right up to Buurman’s rear bumper, nothing could keep the blue Mercedes from taking the overall win and the Blancpain GT Series Endurance Cup trophy.

Not so fast.  In post-race inspection, officials found tape on the air inlet of the No. 4 Mercedes.  That is not allowed as per the homologation for the Mercedes.  As a result, the winning car was disqualified.  That elevated the No. 88 AKKA-ASP Mercedes of Vautier, Marciello and Daniel Juncadella to the overall win.  Provisionally, the DQ also gives Marciello the Blancpain GT Series Endurance Cup championship and the combined Blancpain GT Series championship as a solo driver. – Phil Allaway