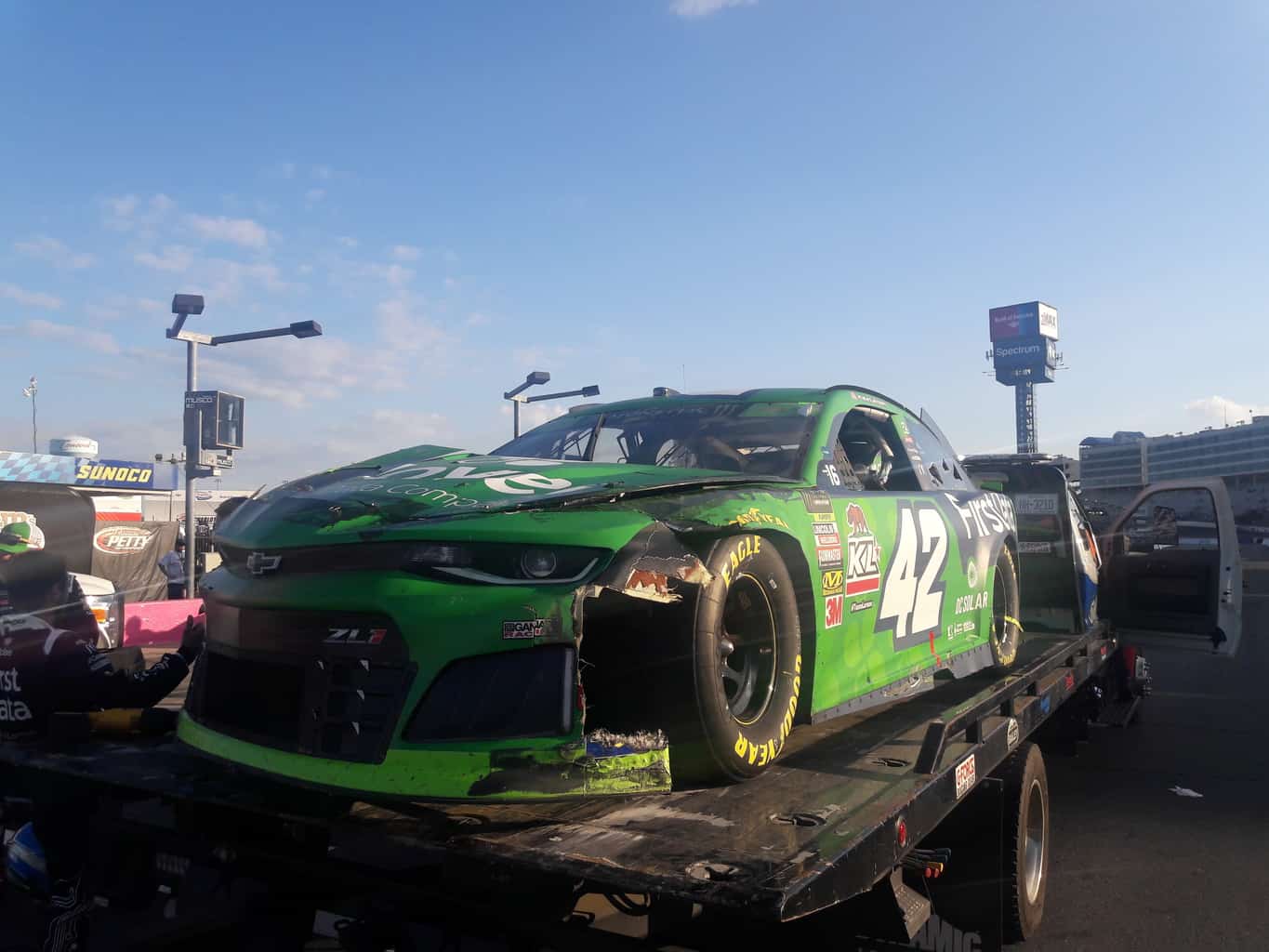 It’s hard enough to face playoff elimination when you make a mistake, but when it comes as payment for someone else’s mistake, it’s really hard to swallow.  For Aric Almirola, trouble kept on coming on Charlotte Motor Speedway’s ROVAL that was not his doing. Instead of letting it end their day, Almirola and his team overcame it.  He didn’t have a great finish, coming home in 19th after being involved in two separate incidents, a blown tire in front of him on William Byron’s car and the late-race pileup triggered by Brad Keselowski.

That less-than-spectacular finish turned out to be a victory of another kind because it was enough to lock Almirola into the next round of the playoffs after breaking a three-way tie for 12th in points.  Had Almirola and his team packed it in, he’d have missed the cut.  He might not be there yet, but this is the kind of race that makes contenders.

Fans asked for a road course in the playoffs and fewer mile-and-a-half ovals on the schedule, and this race accomplished both while still giving teams a home race in the playoffs and moving it to daytime to boot. Really, it was everything we hoped it would be and, in general, it wasn’t the things we were afraid of.

Better yet, fans were excited about the race all weekend.  There was the kind of electricity in the air that hasn’t been felt often in recent years. People watched who hadn’t watched much of other races this season.  It drew buzz, something the sport has needed.

Speedway Motorsports Inc. poured a lot of resources into the layout.  The track has had an infield road course for years, but making one that was NASCAR-ready was a massive undertaking. And it was done with no guarantee of a race.  NASCAR didn’t have to agree, but it saw the need for change and made it.  It’s the most meaningful schedule adjustment NASCAR has made in years in terms of a positive impact on the sport.

It wasn’t perfect. Perhaps its position as a cut-off race is a disservice to the contenders because of its unpredictability. A few did get taken out by things not of their doing, though the carnage was nowhere near that of Talladega.  Many cars involved in incidents were able to continue, including that of Kyle Larson, despite one wheel being at a precarious angle.  That ability kept Larson’s shot at the title alive.

Really though, SMI and NASCAR heard fans asking for things and delivered them.  Beyond that, they created a challenge for teams and some unpredictability.  It was a big risk and the race could have been a disaster.  Props for doing it anyway, and here’s hoping we race this configuration in the fall for years to come.

Where… did Ryan Blaney come from?

Blaney didn’t have the best car, but he did something better than the rest of the top drivers: he avoided trouble at the end. While a few of his veteran competitors overdrove late in the race, desperate to make something happen, Blaney got what he needed out of his car which turned out to be nothing more than a clean finish.

It might sound simple, but a lot of others, including playoff contenders, weren’t able to avoid trouble either of their own or someone else’s. Blaney did, and the result was the trophy.

Until the closing laps, the ending had taken shape: Keselowski and Larson were battling for the win, the 12-man second round of the playoffs was all but decided save maybe one spot.  Six to go. And then came the moment that changed it all. Ricky Stenhouse Jr. took a wild ride that brought out the caution after a long green-flag run.  That caution made several teams breathe a sigh of relief because it saved them enough fuel to make it to the end.

What it also did was set up a bigger crash, one that changed the complexion of the race.  Keselowski took the green flag as the leader, overdrove in the first turn and couldn’t make the second one. Several contenders couldn’t avoid the result: Larson, Kyle Busch, Almirola, Darrell Wallace Jr. and others piled right in. In all, 15 cars were listed as involved to some degree. Martin Truex Jr. made it through with the lead, Jimmie Johnson hot on his heels, left to decide it after nearly a 14 and a half minute red flag.  What they decided was that neither was going to give an inch, and the result was that Blaney drove through their spinning cars for the win.

Why… didn’t hard-charging Jimmie Johnson pull it off?

If Johnson did nothing else Sunday, he showed that his driving ability and desire to win are fully intact and as strong as ever. He could have settled for second and an easy pass into the next round of the playoffs, and nobody would have spoken ill of him for doing it after a year that must have been gut-wrenching for the seven-time champion. After all, second would have been Johnson’s best finish in over a year.

He doesn’t drive that way, though, not when there’s blood in the water. But when he got into Turns 15 and 16 too hot, it all went up in the smoke from his rear tires.  The resulting spin left Johnson eighth in the running order and in a three-way tie for the final playoff spot in the next round.  Johnson lost the tiebreaker while Larson and Almirola move on, and that’s fair, because the tie is broken by the best finish in this round of the playoffs.  Johnson hasn’t performed.

Sunday, though, was vintage Johnson, the bulldog who goes after wins and doesn’t settle.  And now, with nothing to lose, he takes on his favorite track on the schedule: Dover.

How… does the playoff picture look now?

If nothing else, Sunday’s race shows how meaningless it is to look at points while they run.  The remaining field of 12 looks completely different than at points throughout the race.

What has not changed, even by Sunday’s unpredictability, is the group at the top.  Kyle Busch, Kevin Harvick, Truex and Keselowski continue to show that the road to the title runs through them. All four have enough playoff points that it will take a disaster in the next round to keep them from having a chance to make the title race in the third one.

Round one exposed some weaknesses in the remaining contenders. The next round is the least predictable. Talladega looms large, and could propel a marginal contender to the next round with a win and knock any of the top ones down a peg.

Of the four drivers eliminated at Charlotte, none really had the kind of season that suggested a real title hope. The only one who really showed a spark in the first round was Johnson, but his team has struggled so hard that it’s hard to say they deserve to race for an eighth title this year.

One other takeaway from Charlotte in terms of the playoffs was the way NASCAR handles postrace inspection.  This week, as most weeks, the top two finishers will go back to the R&D center for teardown. What we should also be seeing in the playoffs is, at least after the elimination races, the last two above the cutoff and the first two below it get torn down as well. NASCAR should be ensuring that the payoff contenders are aboveboard at all times, and the teams going home are not doing so because of an unapproved advantage gained by someone else.

Well another boring race except for the last lap, and who ever told Dale Jr he was a TV race announcer don’t know what they are talking about.

Please just call it what it was . Blaney was just flat out lucky. How many cars ahead of him had to do something ridiculous for him to be in that spot?

Just two. And being lucky has won a lot of drivers a lot of races.

Luck or not he won the race. Nuff said.

That Johnson and Hamlin didn’t advance does not make me unhappy.

While he didn’t win, Kurt Busch drove the smartest race of the day. Gaining the most stage points and putting himself into the next round.

Overall assessment of the “Roval”, it was interesting to watch.

An old saying proves true: “Sometimes it’s better to be lucky than good.”

Richard Petty always said he’d rather be lucky than good.