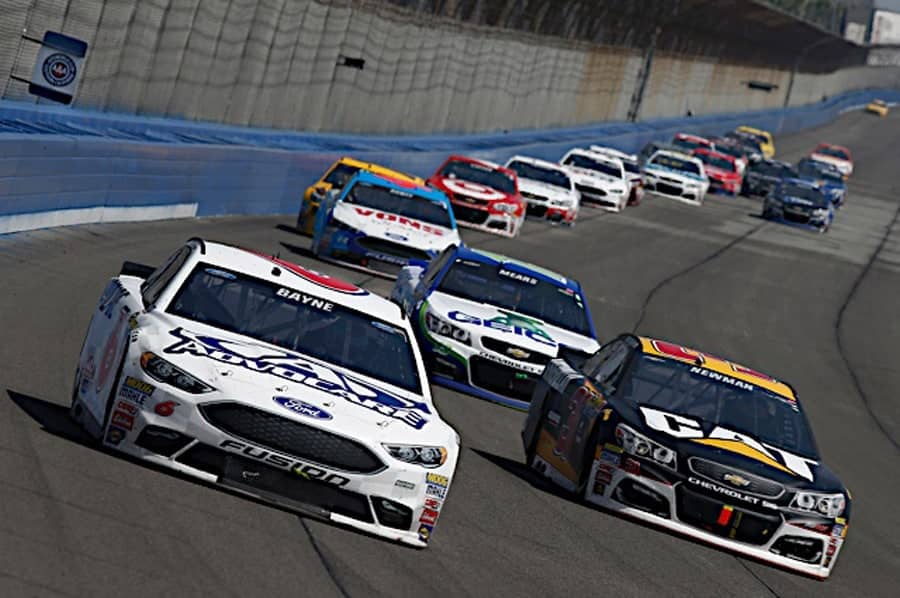 1. Should NASCAR run the ROVAL again?

Yes, absolutely. Sunday’s race wasn’t perfect and no race really is, but it was exciting. There was more passing than the TV broadcast made it seem, which is standard fare. Most races have a lot more going on than fans at home will ever get to see. There was attrition.  There was a wild last lap that resulted in a surprise winner. It was difficult as it should be for drivers.

If the race becomes an annual fixture, it won’t be as unpredictable as time goes on and teams are able to build a catalogue of data. Short of adding a track where they’ve never raced every year — which sounds good in theory, but is in reality limited by the number of Cup-ready tracks out there — there’s no way to keep a new venue new forever.

That’s OK, though. It will still be a challenge 10 years from now to drive Charlotte’s infield road course.  It will still be all too easy in the heat of the moment to overdrive a corner. NASCAR needs a road course in the playoffs, and while Charlotte might not be the best choice, it’s too hot to run there in summer and can be pretty chilly in Watkins Glen in October.

All in all, if nothing else, NASCAR and Speedway Motorsports Inc. gave fans exactly what they asked for this weekend. We have a road course in the playoffs, one less mile-and-a-half oval and a playoff shakeup, all while still providing teams the home race they want to have in the late season. Racing in Charlotte, minus the cookie-cutter oval?  Yes, please.

Absolutely not. The Charlotte road course race is special because of its uniqueness, the way Eldora is special in the Truck Series because it’s the only dirt track. Adding more tracks of similar configuration would make those races more predictable as teams would have that much more information.

Another road course?  That’s another story. A third actual road course would be a fantastic addition to the schedule, provided the date came from a 1.5-mile oval or Indianapolis. That luster has long since worn off. If it was ever there. Perhaps that’s something that could be rotated every few years. Perhaps Road America for five years, then Mid-Ohio, then another circuit.

But adding more infield road courses, even with the success of the Charlotte race, isn’t the answer to anything. The surefire way to make sure something special turns bland is to hand it out like candy. Christmas every day would quickly lose much of its meaning as everyone began to take it for granted. NASCAR needs to add and preserve unique tracks and phase out the cookie-cutters without making cookie-cutters into a new shape.

Well, it’s complicated. In itself, that doesn’t matter. Fans don’t necessarily need to know the minutia of the car specs to enjoy a good race. If the package makes for better racing, then kudos to NASCAR for trying something. By most counts, the smaller tapered spacer will allow for better throttle response from the cars than restrictor plates, but whether that will look different on the track, we won’t know until we see it.

As for the different rules for different tracks, it might make a difference in what fans see, and it’s a good idea in theory. In practice, though, what effect will it have on costs to teams, particularly the ones who already struggle to have the funding to be competitive?  That’s a concern for sure, as is the reduction in testing.  If NASCAR is going to continue to reduce testing,  perhaps a couple of open tests in the teams’ backyards in Charlotte would be a way for them to try new things without using their three dates or breaking the bank on travel.

Beyond that, I’m willing to reserve judgement until we have a chance to see it on track at a couple of different venues. It’s going to have different results at a high-banked track than a flat one. The entire package won’t be used on short tracks, but the bigger spoilers and splitters will. What will those races look like? How about the superspeedways?  For sure everyone has an opinion on what to change to improve the racing, but it’s worth seeing how this actually works over time before clamoring for more.  There’s a limit on how much can be thrown at teams in a short amount of time and get a positive result.

A couple of thoughts here. One, the Daytona 500 is NASCAR’s biggest race. Making it a guinea pig for a new package may not be a great idea. If it’s a flop in any way, from the on-track event to safety, a bad experience throws an undeserved black cloud over the whole season. That’s just not a risk NASCAR should be taking at this juncture. If the racing at Talladega and the summer race at Daytona are great, it gives fans something to look forward to next year. If not, it gives NASCAR time to make other changes before the 2020 Daytona 500.

Also, there needs to be sufficient time to allow tire testing and, should teams choose, organizational testing at Daytona and/or Talladega, and this allows that to happen. It’s a smart move to wait from all standpoints.

Also, while there will be no restrictor plates, the cars won’t exactly be wide open, either. The tapered spacers will still cut horsepower.  Whether the racing will look different (the spacers allow a cleaner mix of air and fuel), remains to be seen. There’s a lot to look forward to next year and a lot of directions to go if things don’t work as hoped.

All is not sunny in Daytona Beach, despite some positives in recent weeks. There is still a lot for NASCAR to address in the coming weeks and months. Under a best-case scenario, the new rules will improve the racing fans see and allow NASCAR to focus on other areas to revamp in seasons to come, mainly the schedule, which still needs work, and the points and championship systems.

The schedule badly needs more variety across all three national touring series, but for that to happen, NASCAR will need to take a hard look at things like sanctioning fees and financial incentives for adding SAFER barriers. No matter the appeal of the track, they shouldn’t consider racing without them. It needs to be profitable for a track to host a race. Martinsville doesn’t host an XFINITY Series race because the track loses money on that series, which has higher sanctioning fees and purses than the Truck Series but less revenue than a Cup race. NASCAR will have to address that kind of situation in order to expand.

Then there’s the points and championship to consider. Fans who weren’t on board with the system in 2004 by and large have not changed their opinion in 2018. Newer fans don’t know anything else and are easier to sway, but it makes learning the sport’s history and backstory more difficult in that there’s really no way to relate to the way things used to be. Maybe that’s not important for the sport to move forward, but it well could be very important indeed.

Fans need to know the best in the sport are truly the best for it to be legitimate. The current system leaves that open for interpretation. Yes, there can be arguments about whether champions in any sport are worthy, but other sports don’t hand out a bunch of points before the postseason and there’s no chance of a team not in the playoffs affecting the championship. There’s a lot for fans to learn in NASCAR, but how and why someone wins a title should be crystal clear, and that’s not always the case.

Amy, thanks for a well-written, thoughtfully sound article.

From what I saw of the event, the best part was Brad and Larson actually racing. It reminded me of Gilles Villeneuve and Rene Arnoux at the 1979 French Grand Prix.

We were spoiled watching Gilles.

Question #6: What about BF? Where is this going take NASCAR?