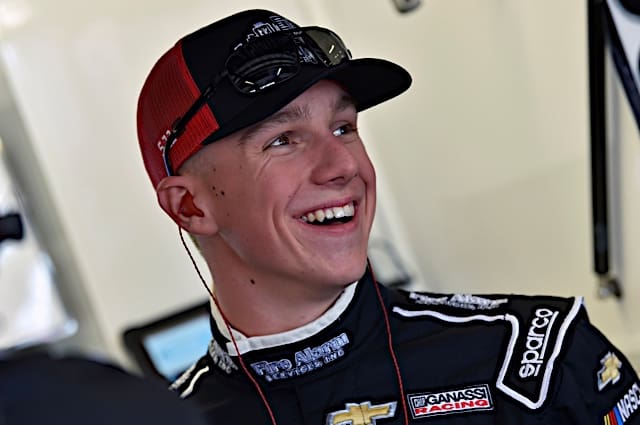 John Hunter Nemechek is doing more racing in NASCAR this season than ever before. However, he has no shot at a driver’s championship in either the XFINITY or Camping World Truck Series postseasons.

Nemechek, 21, made the jump to Chip Ganassi Racing this season to run a partial schedule in the No. 42 XFINITY car, in addition to driving in Trucks for his family-owned team, NEMCO Motorsports. The year has been one of trials and tribulations for the second-generation driver.

The Truck Series? That’s gone well with a win at Martinsville Speedway early in the season. Nemechek has been in contention to win a handful and has lost a pair of races in the final laps at both Iowa Speedway and Bristol Motor Speedway by running out of fuel and blowing an engine.

As for the XFINITY Series, Nemechek has won a pair of stages, led 56 circuits and posted six top-10 finishes in 13 races. Overall, he’d consider it a successful season.

“We started off really good on the XFINITY side, and I had to learn some things and get some experience to try and get a handle on it,” Nemechek told Frontstrech. “We continue to make our stuff better each week we’re at the racetrack.

“Chip [Ganassi, CGR owner] built a great organization and has a great team over there. Pretty much anything I need in order to succeed and make myself better, they’ve given it to me. It’s awesome to have the support of Jamie [McMurray] and Kyle [Larson] and all the teams there. The goal is one team, one goal and that’s to win races and championships.”

Winning races is exactly what the No. 42 team has done in 2018. Larson has four victories in six starts, while Ross Chastain, an XFINITY regular, won in it most recently at Las Vegas Motor Speedway, clinching a spot in the playoffs. Combined, the three drivers have led 851 laps.

For him, it’s a family atmosphere at Chip Ganassi Racing.

“There’s quite a few guys at Chip Ganassi Racing that worked with my dad [Joe Nemechek] back in the day when they first started getting into the sport when I was young,” Nemechek said. “To continue those relationships and already having those relationships established was cool. There are quite a few guys over there that I grew up around the racetrack with, and I was kind of raised in their eyes as well.”

But there’s no getting around it — Nemechek is still inexperienced in the XFINITY ride. Despite the No. 42 having six victories this season, Nemechek doesn’t believe it puts more pressure on him as a rookie. Instead, he knows that the team provides some of the best race cars for a driver to compete in.

“We’ve led laps this year, we’ve been in contention, but we’ve had mechanical failures and stuff not go our way,” Nemechek said. “When you have fast race cars like we’ve had this year and you have tough breaks like we’ve had, it definitely hurts of, ‘damn, we should have won that week,’ or, ‘damn, we had the fastest car.’”

At Kentucky Speedway in mid-July, Nemechek looked to be on pace to win his first XFINITY race. But after winning Stage 2, the battery fell out of the No. 42 car. Prior to that, he led 14 laps in the race, passing Kyle Busch for a playoff point toward the owner’s championship.

Because Nemechek has a fast race car, it’s easy to remain determined even with some of the mechanical failures he’s had this season.

“I’m pretty confident every time I get in that race car,” he continued. “I know it’s going to be fast when we show up to the racetrack, and if it’s not, we’re going to work on it and make sure it’s fast come race time. I’m confident in our team, I’m confident in our ability. From a driver’s standpoint, confidence is huge.”

Even though he’s run in just 13 of 28 races, Nemechek is 17th in the championship standings, ahead of six drivers who have competed in every event. Following Iowa Speedway in July, he was up to 13th. He’s only been in the car once in the nine races since then.

During that time, Nemechek has run in four Truck races. He’s not in the Truck playoffs despite winning this season because in order to be eligible for a championship, a driver must attempt to qualify for every series race.

“I wish I was running full-time on either the Trucks or XFINITY side. At the same time, it’s still a championship and still a chance to get our name recognized,” he said. “From a first-year standpoint, if we can go out and win the [owner’s] championship for Chip, it would be successful.

“It’s definitely incredible to show how many points we’ve racked up this year from a driver standpoint and continuing to try and make our success better. Running for that driver’s championship would be nice this year.”

Starting this weekend at Dover International Speedway, Nemechek is scheduled to be in the No. 42 for the final five races of the season. The Monster Mile is the only venue of the tracks remaining in 2018 where he has prior experience in XFINITY— he finished 14th at Dover earlier this year.

Trying to find a rhythm is something the 21-year-old hasn’t been able to do for the past two months in XFINITY. However, he’s hoping these races lead to a bigger opportunity in 2019.

“I would like to be running for a driver’s championship in XFINITY next year,” Nemechek said. “Just continue the stepping stone and continuing our main goal of being in the NASCAR Monster Energy Cup Series.”

I wonder if Nemechek remembers taking out Chase Elliott at the final truck race before their chase and denying him a shot at the championship. KARMA.