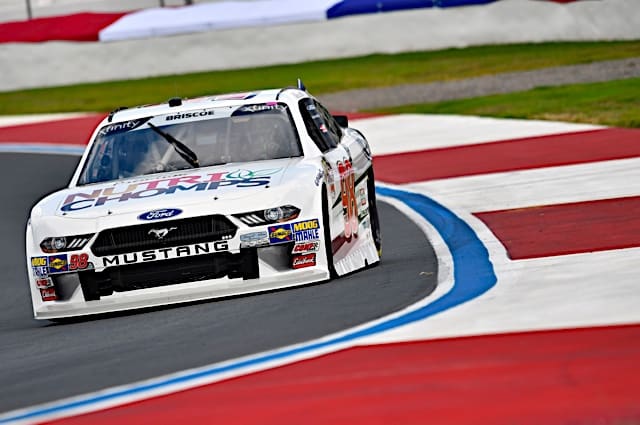 Briscoe took the green flag for the inaugural race at the Charlotte Motor Speedway ROVAL in ninth but played strategy to get track position in both stages one and two. When the final stage began, the rookie driver was in prime position to capitalize leading to the first victory of his young career.

Briscoe mentions that the victory has yet to sink in and he’s hoping for more success in the immediate future. The backing of Ford Performance and its driver development program has helped elevate Briscoe’s stock, giving him opportunities in anything and everything. He discusses why he thinks Ford believes in him.

Then, the trio move on to the Monster Energy NASCAR Cup Series race at the Charlotte ROVAL and discuss a wild last lap that saw Jimmie Johnson go for the victory, but ultimately come up one position short of advancing to the next round of the playoffs — and, oh yeah, Kyle Larson‘s masterful drive of bouncing the car off the wall to get past Jeffrey Earnhardt as the checkered flag flew in order to knock the No. 48 car out of the postseason.

Playing Monday Morning Quarterback, should Johnson have went for the victory? In the bigger picture probably not, as Neff calls it a dumb move. But Ryan Blaney was the victor, winning his first race for Team Penske — a team that’s hitting its stride at the right time.

Finally, we discuss the 2019 rules package and what type of racing we might see. Spoiler alert: We’re not too pleased.

Make sure to leave us a rating and review and subscribe to the Frontstretch Podcast:iTunes