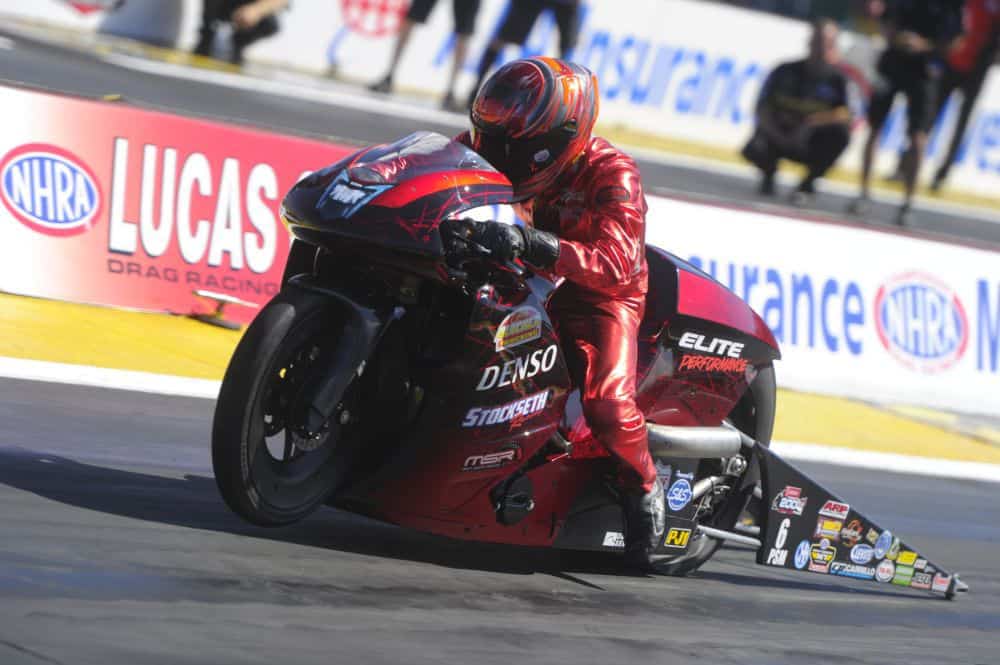 After a week off to regroup, two Countdown races loom in the coming weeks for the NHRA Mello Yello Series drag racers. First up is the AAA Texas NHRA Fall Nationals from Texas, followed the next weekend by the NHRA Carolina Nationals from Charlotte. Just two-wide this time. None of that crazy four-wide madness in the Countdown.

For Top Fuel’s Steve Torrence, the question is, will the off weeks be good for his team so they can re-energize or bad for the momentum they’ve built in the title run so far. Or will it even make a difference to a team that’s been set on kill all season?

Just two races into the title fight and Torrence has pulled away by 70 points over second place Clay Millican, who has been in chase mode all season. It really looks like it’s more of the same as the rest of the season in Top Fuel so far.

There’s also a 70-point gap in Funny Car, but it’s between points leader Robert Hight and his John Force Racing teammate, Courtney Force, who has fallen to third in the hunt after leading easily all throughout the regular season. The points lead has stayed within the JFR team, but with just four races left in the season, Courtney Force and team have some work to do if they want to finish on top.

This is where the championship format can sting, but it also shows that Force’s group has lost serious momentum since the summer months when they totally dominated. You could make the argument that it only takes a six-race hot streak to steal a championship, but in a case like this, you could also reasonably argue that sometimes it still does take a full season run — and not an early leap to the front, only to limp home at the end on the virtue of that early lead.

Speaking of a loss of momentum, both Greg Anderson and Erica Enders sat atop the Pro Stock standings during the regular season, but they’ve slipped to fifth and sixth respectively during the Countdown. Tanner Gray, on the other hand, keeps pushing forward. He leads Vincent Nobile by 52 and Drew Skillman by 74.

Gray, it would seem, has extra reason to want to sew up this championship as he’s revealed that he’ll be moving to NASCAR to compete in the K&N Pro East Series next season. What better way to go out than on top? While Gray started his racing career in a Jr. Dragster, he also has experience going in circles, competing some in late models at Hickory Motor Speedway.

“I’ve had a lot of success and really enjoyed my time drag racing,” Gray said. “It comes down to me wanting to be able to race more and run a little bit more. I’ve wanted to do this since I was a kid, and I had the opportunity to do it, so I’m taking it. The goal is to race in the [Monster Energy NASCAR] Cup Series one day.

“My dad and grandpa are supporting me, and if I can do it, that’s great. And if not, then it wasn’t mean to be. I’m ready to see how it turns out.”

It’s been a crazy year for Pro Stock Motorcycle racer Matt Smith. He failed to qualify for the season opener on his old Victory bike after his new Suzuki arrived too late to be ready in time. He found himself back on the Victory unexpectedly in Charlotte when his business partner suddenly decided to withdraw support from the team and left with the Suzuki.

He’s managed to scramble and keep going and eventually found new support in the person of Richard Freeman, who became a partner on Smith’s bike. Since then, Smith has won the Mickey Thompson Pro Bike Battle. As well as having two wins in his pocket, Smith finds himself atop the Pro Stock Motorcycle standings, leading LE Tonglet by 21 points after two events.

You have to look all the way down to third to find the first of the Screamin’ Eagle Vance & Hines Harley-Davidson riders, Eddie Krawiec, who trails by 41. Can Smith hang on and keep the usually dominant Harley riders behind him?

Two events over the next two weekends will tell the story. We’ll see how it shakes out and perhaps get a clearer picture of how the championship is shaping up after this next two-race segment of the Countdown.