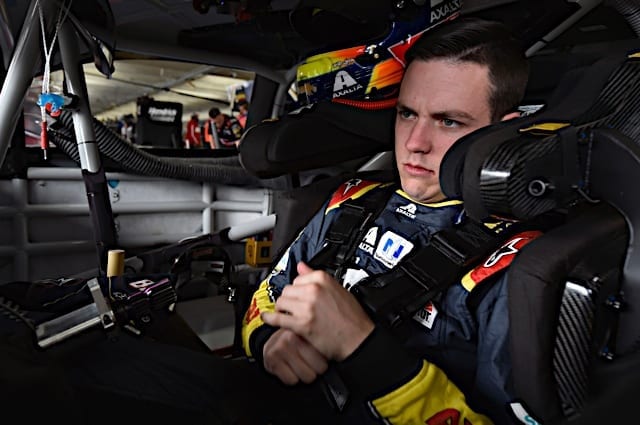 Alex Bowman entered the Monster Energy NASCAR Cup Series playoffs shotgun in the coveted No. 16 seed. However, he outran at least four drivers in the opening round, advancing to the Round of 12.

Bowman, 25, is in his first full season for Henrdick Motorsports. And for him, it started off with a bit of a struggle, as Chevrolet unveiled the new Camaro ZL1 this season.

“I don’t think it was all the Camaro,” Bowman told Fronstretch on Friday at Dover International Speedway. “We were just off in a lot of different areas and we’ve made up a lot of ground in those areas.

“It was pretty frustrating. I thought we would pick up right where we left off in 2016 [filled in for Dale Earnhardt Jr. in 10 races]. Obviously, we didn’t do that. I probably had really high expectations and wanted to win right off the bat. To kind of go to Atlanta and be like ‘we’ve got some work to do,’ was frustrating.”

It took Bowman until the sixth race of the season at Martinsville Speedway to record his first top 10 of the season. His first top-five effort came two races later at Bristol Motor Speedway. From that race on, it was an upward trajectory for the No. 88 team.

As an organization, Hendrick Motorsports didn’t pick up its first, and only, win of the season at Watkins Glen International when Chase Elliott recorded his first-career victory. But the No. 88 team grinded, en route to nine top 10s during the regular season.

He believes the team has found the speed it needs to be a contender moving on in the playoffs.

“We’ve made a lot of progress lately in the last month-and-a-half, and have gotten a lot faster,’ Bowman mentioned. “It’s been good to have that speed now, and we’re going to continue to make that process and only get better.”

HMS showed its hand in the first round of the postseason. None of the three championship eligible teams won, though Jimmie Johnson had a shot at the checkered flag until the final corner last Sunday (Sept. 30) at the ROVAL. Ultimately, spinning out costed the No. 48 team a shot at the title.

But Bowman recorded stage points in every stage, totaling 23 in the opening round. Meanwhile, that resulted in just one top-10 finish, coming at the ROVAL in fourth.

That was good enough for Bowman to advance to the second round of the playoffs by a few points. He doesn’t think the No. 88 team is done yet.

“I think we can be really good,” Bowman said of the Round of 12. “Kansas [Speedway] is a good place for me. We crashed there in the spring, but we can be really strong there. At Talladega [Superspeedway], you never know what can happen and Dover we can be really fast at as well. Everybody just writes us off every round, but I’m enjoying to continue prove everyone wrong.”

In 17 combined starts at Dover, Talladega and Kansas, Bowman has a pair of top-10 finishes, with a best outing of seventh at Kansas in 2016.