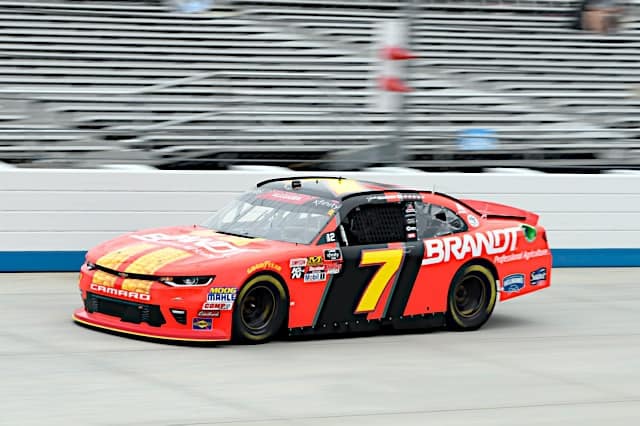 Justin Allgaier dominated practice at the Dover International Speedway on Friday. The spring race winner has been on a downhill slide as of late and is in an odd position for a driver who won the regular season championship. Allgaier needs to have a solid afternoon Saturday or he could face elimination. The weekend though kicked off the right way for the driver of the No. 7.

Allgaier led the way in Friday’s first practice for the NASCAR XFINITY Series Bar Harbor 200 presented by SeaWatch International. He turned a 154.712 mph lap to put his No. 7 on top of the speed charts. Fellow playoff and JR Motorsports driver Tyler Reddick finished the session in second, 0.078-seconds off of Allgaier’s pace

Matt Tifft (10th), Ross Chastain (14th), Ryan Truex (15th), and Ryan Reed (16th) were the slowest four playoff drivers. Chastain is the only driver of the four who is to the good on points with a nine point advantage over Austin Cindric. Cindric finished the session ninth on the chart.

There was a 4.978-second margin between first place Allgaier and 34th-place Morgan Shepherd.

Allgaier topped second practice late after Custer led a majority of the session. A 153.446 mph (23.461-second) lap around the 1-mile concrete track. The margin between first and second was just -0.001 seconds.

John Hunter Nemechek spoiled the playoff party up front by turning in the third fastest time. Playoff drivers Bell and Cindric rounded out the top-five speeds.

Much like in the first session, Tifft (13th), Truex (14th), Chastain (15th), and Reed (16th) were the slowest playoff drivers of the session. As noted above, Cindric finished the session in fifth.

There was a 2.177-second margin between first place Allgaier and 35th-place Josh Bilicki.

Qualifying for Saturday’s Bar Harbor 250 presented by Sea Watch International is slated for Saturday, October 6th at 12:05 p.m. ET on NBCSN. The race is slated to kick off with Countdown to Green at 2:30 p.m. ET also on NBCSN.