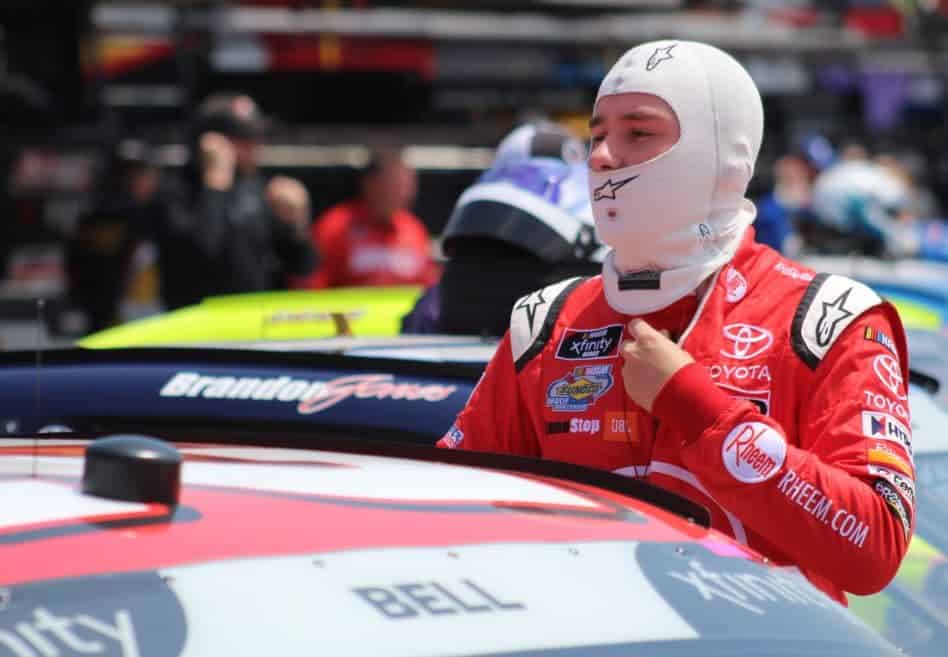 Then, out of nowhere, all heck broke loose as the pressure to advance in the playoffs took center stage.

A pair of late cautions shuffled the field around, pitting Matt Tifft, Austin Cindric and Ross Chastain in position to battle for the final two playoff spots. All of it occurred well behind race winner Christopher Bell, who romped to his second win of the postseason. But there was high drama in the battle behind him, one that ended with Chastain becoming the odd man out.

Cindric was able to drive a strong race in the third stage, perhaps the best of the trio despite finishing eighth overall. That pushed him ahead of Chastain to make it into the round of eight and advance. Ryan Truex, Brandon Jones and Ryan Reed joined the JD Motorsports underdog in missing the cut.

Tifft and Chastain were racing hard for position on lap 179 when Chastain ran a bit into the No. 2 Chevrolet and Tifft slid into the No. 60 Ford of Chase Briscoe. Briscoe, coming off a breakout win at the ROVAL last week, ended up hitting the wall but was able to recover to finish 19th. It has been a truly awful season for the No. 60; it was the 26th time! this season that the car has wrecked in 29 races.

Tifft and Chastain then played a game of chess at 150 mph. Chastain needed to finish five positions ahead of Tifft to pass him in points; for a time, it looked like he’d do it despite suffering a pit road speeding penalty. Tifft had an awful final restart and fell behind Chastain in points as late as 10 laps to go in the race.

Unfortunately, Chastain could only charge so far to the front, forced to settled for 13th place. Tifft finished 15th after recovering enough to pass two cars and cling to his three-point lead on Chastain.

Meanwhile, up front, the penultimate restart Chastain was penalized under included a roll of the dice by Brandon Jones. Jones, needing a win to advance, took just two tires and jumped all the way into the lead pack. But Bell disposed of the challenge easily, jumping out front on the restart and all but finishing off Jones’ title chances.

Bell then survived the last restart and held off Cole Custer to win his sixth race of the season. His victory broke a record for most by a freshman driver in the XFINITY Series.

The two late-race restarts were the only two not caused by the end of stages. On lap 162, the No. 45 of Josh Bilicki blew a tire on exit of Turn 4 and slammed the wall hard. Bilicki could not continue and had to settle for 31st overall.

The first two stages passed without any incident. Bell passed pole sitter Daniel Hemric on the first lap and held on to it to win the first stage. In stage two, it was Hemric’s turn to dominate. This time, he charged around Bell on pit road during the stage break and held on to win. But during the second stage break caution, Hemric sped on pit road. The penalty pushed him back in the pack and he never challenged for the lead again. A seventh-place finish was small consolation for what otherwise could have been a winning car.

Other results by playoff drivers included Justin Allgaier, who led some laps but ended the day in third. Jones ran sixth, falling short of advancing while Truex ran 10th. Elliott Sadler had a quiet day and wound up 11th. Tyler Reddick finished 14th and Reed rounded out the playoff field in 16th.

Bell now leads the series into the round of eight with a fairly large advantage. He’s got a 33-point lead over the final cutoff spot, currently held by Custer and Sadler. Allgaier sits second, 28 points to the good while Hemric sits two points ahead of fourth. Reddick (-1), Tifft (-8) and Cindric (-10) round out the round of eight.